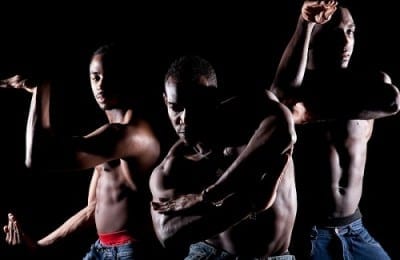 At highly anticipated debut of "LIFT," men tell their stories through dance

It’s 10 o’clock at night and choreographers Daryl Foster and Terry Slade have just begun rehearsal for “LIFT.” They rehearse after hours at the studio Gotta Dance Atlanta, where Slade teaches in the evenings after his day job. A dance concert choreographed and performed entirely by men, “LIFT” will take place this Saturday, May 15, at 2 and 8 p.m. on the Woodruff Arts Center’s Hertz Stage.

With almost overpowering energy, the three lean, muscular dancers weave through overlapping canons, spring into turning leaps and reach out as they ripple into the floor. A series of barrel turns loop through the air like the music’s syncopated rhythms and cyclical melodies. Both Foster and Slade advise the dancers on how to release tension — and aggression — so they can move softly and fluidly, finding moments of vulnerability. (Photos by Lynne Cymone.)

Based on biblical narrative, Slade’s trio explores the ebb and flow of emotions, the fears and anxieties that three of Christ’s disciples might have experienced during the night they spent in the Garden of Gethsemane, Slade explained. “It’s about men clinging together, living together, eating together, striving together.” In a broader sense, it’s a piece about brotherhood.

Foster approached Slade last fall with the idea of creating “LIFT.” Its goal is to help build a stronger community among male dancers so they can have fulfilling careers in Atlanta rather than have to seek them in cities like New York, Chicago or Philadelphia, as Foster and Slade have done. All-male dance concerts have been produced in New York, Philadelphia and Miami, but this one is a first for Atlanta.

Foster felt that personal experiences unique to men — with themes such as masculinity, sexuality, spirituality, community, politics and fatherhood — could be explored much more deeply in the exclusive company of other men. Foster and Slade invited Atlanta-based choreographers David Norwood, Juel Lane, Quincy Lamar and Timothy Jones, along with former Alvin Ailey dancer and guest choreographer Christopher Huggins, to present works centered on those six themes.

Foster’s “Broken Ties,” to music by Pat Metheny and Marvin Gaye, explores a father-son relationship. Foster told me that he began the process by asking the dancers to tell personal stories of rites of passage they had experienced between fathers and sons. One of the dancers had never learned how to tie a tie, even as an adult, because he had no father. Hence the duet, danced by Jelani A. Jones and Quintin Ponder, centers on a boy, who has just lost his mother, and his father, who’s been absent for most of the boy’s life. The father appears at her funeral, and wants to be back in the son’s life, but the son doesn’t want the relationship. In the end, father and son reconnect as the father shows the son how to tie a tie.

Slade’s solo “If,” to the Stevie Wonder Song “If It’s Magic,” expresses Slade’s love for his wife and for God, highlighting the eternal aspect of love. Juel Lane’s duet “Waiting,” performed by Lane and Jamal Callender, follows a gay relationship that gradually becomes more open as society becomes more tolerant. And David Norwood’s “Apollo Ghetto” explores a man’s many dimensions through emotional states such as anger, purity, strength and courage, combining poetry with a fusion of hip-hop and contemporary dance.

When Foster first came to Atlanta four years ago, he saw that most modern dance concerts were dominated by women. The roles he danced — often romantic duets with women — had little to do with his personal experience. “For the last 17 years I’ve been dancing and telling other people’s stories,” he said. “For one and one-half hours, I want men of color — white, black, Asian — to tell their stories.”