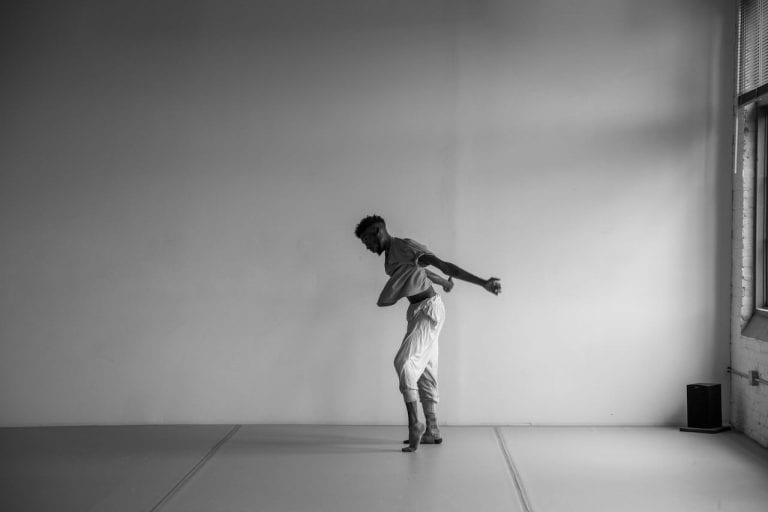 Okwae A. Miller will present “The g[R]ay Boi" at the MAD Festival. (Photo by Jamie Hopper)

Douglas Scott, creator of Full Radius Dance and the Modern Atlanta Dance Festival (MAD), fears losing the historical first person voice in Atlanta dance. For the past four years, he’s not only sought to identify the pioneers of the scene, but honor them during the annual festival, which will be presented this May 11 and 12 at the Balzer Theater at Herren’s.

For Scott, it’s about paying homage to the entire spectrum of modern and contemporary dance in the city, and acknowledging those who built the lasting foundations that so many dance leaders and organizations continue to stand upon. Past recipients include figureheads and forerunners Ruth Mitchell, Mozel Spriggs and Virginia and Bobby Barnett. This year’s Pioneer of Atlanta Dance recipient is Lee Harper, director of Lee Harper & Dancers and owner of Lee Harper Studios. Harper has taught, choreographed, directed, inspired and touched countless lives for over three decades.

“A number of dancers have come through her tutelage,” says Scott. “Lee brought strong modern technique and a sophistication to Atlanta modern dance, and was a pioneer in working with the orchestra. She continues to be a vital part of the Atlanta community.”

He adds that many years have passed since Harper’s company performed on MAD’s stage, recalling the work they performed, Crossroads, with the final image of company dancers covering Harper with tube-like props until her form disappeared from view. Her impact remains visible though, as ArtsATL’s Gail O’Neill profiled Harper as part of the Legacy Series. In addition to being presented the award on Saturday, Harper’s company will perform one of her works, Tristesse, in her honor.

Harper says she is humbled to receive the award, and to stage Tristesse, which she choreographed in memory of Robert and Caroline Shaw, the conductor and his wife who brought Harper from New York City and the Alvin Ailey American Dance Theater to work with the Atlanta Symphony Orchestra in 1975. In addition to leading her own company’s travels and school shows, Harper continued to choreograph more than 500 singers, dancers and musicians for the symphony until 2012.

“Robert was the reason I moved to Atlanta,” says Harper. “We haven’t done Tristesse for 10 years, so I resurrected it. It’s really fulfilling to do, and the dancers love it.”

The six dancers that will perform the work — Jenny Gould, Millie Rhodes, Dominique Fewell, Elaine Wadsworth, Laura Rossini and Katy Roelle — have shared the stage with Harper for many years. The company is a family, and Harper talks lovingly about each member, many of whom she has watched grow as movers or trained from a young age.

Similarly, the program for the 24th annual festival excites Scott, as it incorporates individuals and companies at every level of their artistic journeys — from Core Performance Company in its 32nd season to recent Emory dance graduate Ruchi Ahuja — as well as completely new voices to Atlanta. A panel of professionals outside the Atlanta dance community adjudicates selection for the festival. This year’s works were viewed and chosen by independent dance artist Alice Sheppard, University of Florida dance professor Trent D. Williams and Maura Garcia, who directs her own company based in Kansas and North Carolina. Adjudicated works aim to showcase Atlanta dance’s emerging and established artists.

“We do need a sense of history in Atlanta,” says Harper, who has proudly witnessed the city’s continual growth. “I applaud all these young dancers doing their own work and finding their own way.”

First time artists to MAD include Lauren Withhart’s withhart.dance.projects and emerging choreographer Meaghan Novoa. Host company, Full Radius Dance, will premiere too far this time to come back again, a precarious look at edges and how far one can be pushed. Okwae A. Miller & Artists will return to present The g[R]ay Boi, an interdisciplinary and collaborative work examining the “complexities of black gay men.” Sarah Arnett’s SWADanceCO is back for its fourth year with Refraction. Core Performance Company returns to the MAD Festival stage after more than a decade as well with an excerpt from Patton D. White’s July 13, 2016: 4:10 PM.

As Scott hopes to preserve the first-person perspective by spotlighting the city’s most influential voices, each choreographed work at this year’s festival continues to interpret and define Atlanta modern dance on the expansive canvas of a stage. Whether it comes from a personal or historical place, the result is a broad and lively palette of dancers, choreographers and directors.

Though she jests that being named a pioneer calls up images of building log cabins, Harper continues to strengthen the foundation of Atlanta’s modern dance community. As the current artist-in-residence at The Westminster Schools, she remains dedicated and unwavering in her mission to bring movement into the lives of as many young people as possible.

“Anyone can dance,” states Harper. “I love being around children and teaching children because dance builds your self esteem, and takes care of your body, your brain, your heart and your passion. Anybody can dance, and they should have that opportunity.”