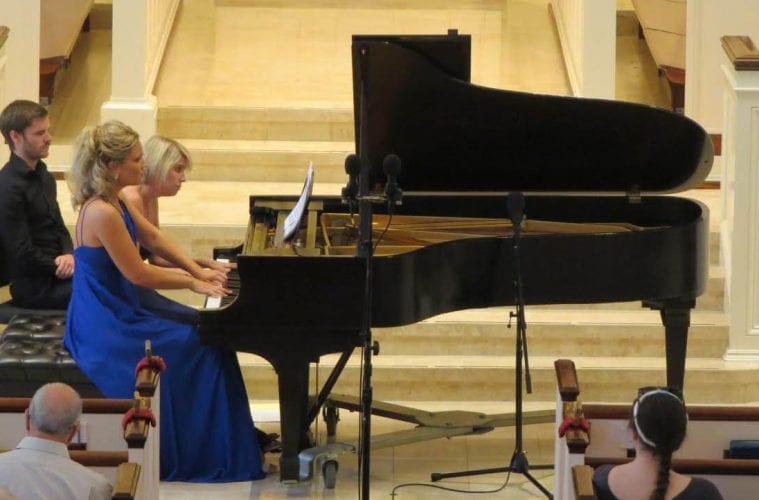 On Sunday’s warm and brilliantly sunny afternoon, the Georgian Chamber Players performed its final program of the season, a concert of music by Brahms, Menotti and Glazunov, with guest cellist Joel Noyes, at Trinity Presbyterian Church in northwest Atlanta.

Duo pianists Julie Coucheron and Elizabeth Pridgen opened the program with “Sixteen Waltzes,” Op. 39, by Johannes Brahms, followed with two of that composer’s Hungarian Dances, Nos. 5 and 6. Pridgen and Coucheron have become increasingly prominent as a piano duo in Atlanta’s chamber concert scene. Only one week before, they performed a complete program of four-hand works by Schubert, Dvorak, Strauss, Saint-Saens, Rachmaninoff and Ravel at the Amelia Island Chamber Music Festival in Florida.

Here, though, they delightfully turned to the wonderful waltzes of Brahms. It’s a delight to hear them played with an understanding of the composer’s phrasing and melodic gifts, without just dancing the music through the ballroom. The contrasting two Hungarian Dances followed, capping off the elegant waltzes with an earthy, rustic Gypsy fervor.

Coucheron was then joined by cellists Christopher Rex and Joel Noyes in a performance of the third and fourth movements of Gian Carlo Menotti’s “Suite for Two Cellos and Piano.” An Italian-American composer-librettist best known for composing some two-and-a-half dozen operas, and libretti for other composers’ operas (such as Samuel Barber’s “Vanessa”), Menotti nonetheless wrote a considerable number of works in other genres, mostly vocal and orchestra. The 15-minute “Suite for Two Cellos and Piano,” composed in 1973, is one of his very few chamber works.

Rex and Noyes chose to perform the last two movements of the work’s four. The mostly solemn dialogue between the two cellos in the “Arioso” third movement has its moments of emotive longing, and proved exemplary of Menotti’s gift for linear, voice-like expression even in instrumental writing. The spunky “Finale. Allegro” that followed contrasted greatly in its relentlessness of dialogue between the instruments, without feeling forced or excessive, and was more lighthearted than the pensive, gray-brown “Aria.”

Guest cellist Noyes, who is assistant principal cello of the Metropolitan Opera Orchestra, made for a good pairing with fellow cellist Rex, who stepped down from his long-time post as principal cellist of the Atlanta Symphony Orchestra in early February. Coucheron’s piano part served as an effective collaborative backdrop for the cellistic interplay.

After intermission, Rex and Noyes returned to the stage with violinists David Coucheron and Julianne Lee and violist Reid Harris to perform Aleksandr Glazunov’s String Quintet in A major, Op. 39. Written in 1892, the piece exhibits not only the composer’s glowing Russian late romanticism, but also his ability to reconcile the competing nationalism and cosmopolitanism of the generation of Russian composers before him.

Like Schubert’s famous String Quintet in C major, Glazunov added a cello to a typical string quartet to make his quintet, instead of the more common practice of adding a viola. That hardly diminishes the viola’s role in the work; on the contrary, the quintet opens with a prominent solo viola, unaccompanied for four bars, before the rest of the group enters, and which remains the dominant voice through the beginning of measure 12, where the second cello begins a brief exchange among the ensemble before the first violin takes the lead in the movement’s undulating 9/8 meter. The second movement, a playful scherzo, made extensive use of pizzicato technique. A more melancholy third movement intervened before the joyful, robust finale.

An interesting side observation is that Glazunov himself transcribed this quintet for piano for four hands, as was often the case with various orchestral and chamber works in the 19th century, to make their study and enjoyment possible in parlor of the typical bourgeois home. Given the makeup of Sunday’s concert, opening with piano, four hands, it would be an interesting experiment to hear the original Glazunov Quintet contrasted with his transcription, though I would not have wanted to give up the Brahms by any means just to do such a lab test. Leave that for another day at a concert-demonstration in a university. This one was meant for the pleasance of the listener on an equally pleasant spring afternoon.