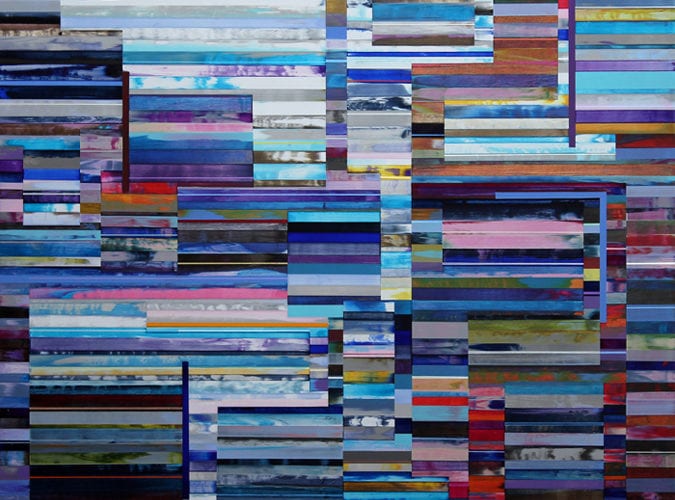 Sculpture, painting, photography, textiles and new media such as animation are represented in the exhibition, which runs through June 15. It opens with Scott Eakin’s A Clever Fiction (2018), an acrylic painting on wood with a gridded composition. Each rectilinear compartment shows a process of layering and scraping away, suggesting both order and chaos. It’s a useful introduction to the show, whose works range from analytical and conceptual to gestural and intuitive. Eakin is one of five winners of a jurors’ prize.

Other paintings veer from Eakin’s architectonic order, using loose nonobjective imagery instead. Notable examples are the tall, vertical Xenophobia (Black Paintings), a 2018 piece by Luke Buffenmyer, and a small, attendant work by Christina Kwan titled Privacy (2019). They hang together. His commanding work on wood and her acrylic ink on paper play off the other’s process: controlled, precise handling of materials that merge aspects of drawing and painting.

Two three-dimensional pieces — by Paula Reynaldi and Sean Haynes — won jurors’ prizes. Reynaldi’s small Duet and Expansion III (both from 2018) showcase sculpture’s potential to transform materials. Reynaldi creates vessels using intricately folded masking tape. Her work sets the humble material free from its utilitarian life. Haynes blurs the line between painting and sculpture in multimedia works. His Yebo Sawubona (2017) translates from isiZulu to “Yes, I see you.” It’s a meditation on the effects of Hurricane Katrina on his native New Orleans. The cacophony of forms — including a tiny chair and an actual birdhouse — suggest the storm’s dislocating impact. Paula Reynaldi’s Expansion III (2018), made of masking tape and measuring 12 x 6 in, is another of the five jurors’ prize winners. Another jurors’ prize winner: Sean Haynes’ Yebo Sawubona (2017), acrylic on wood with screws, a birdhouse and paper. The sculpture measures 23 x 47 x 5 in.

Some sculptures suggest overt, political content. In Armed for Purity (from 2017’s DUEL//DUAL series), Joseph Guay uses vintage military canteen filters in a gridded formation. The repetition of translucent gold-tinted mesh has a beauty that contradicts the violent situations in which it can be found. Terry S. Hardy’s Sweet Dreamers (2019) shows a chain-link fence in a small, cage-like rectangle. He puts an empty bed inside, evoking the plight of children held captive in Trump-era detention centers.

You’ll see both high naturalism and gestural expression here. Philip Carpenter’s exquisitely rendered AR 15 (2018) and Uzi (2016) are the former. They depict weapons dead-center against a white background. Carpenter, another jurors’ prize winner, draws with the authority of a scientific illustrator. By doing so,he evades clear condemnation or an embrace of weapons. A large, scrawled signature disrupts his clinical sensibility. Domesticated Crowd (2016) by Maggie Evans shows a similarly careful technique in its triangular accumulation of chairs against a blank space.

Eleanor Neal’s provocatively titled Am I Human (2016) is clearly gestural expression. We see a mass of scribbled graphite lines inspired by Andre Schwarz-Bart’s 1973 book A Woman Named Solitude. The work of historical fiction recounts the experiences of an enslaved woman from Guadeloupe. Neal, a jurors’ prize winner, suggests human presence and experience through accumulated marks instead of conventional figurative practices.

In Figment (2018) and Harvest Home (2019), Mary Anne Mitchell uses the 19th-century wet-collodion process to create anachronistic images of ghostly figures outdoors. Diane Kirkland looks at contradictions in the contemporary South. Her Unveiling of Sidney Lanier (2016) shows a portrait bust wrapped in white, suggesting both absence and presence. Behind Lanier are cropped images of white men, one in a cowboy hat, another in a gray suit, thus insinuating the monument’s potential disruption of the status quo.

Detail: Jerry Siegel’s Evah Destruction (from his 2018 REVEAL series) is a photograph with archival ink on metal. It measures 14 x 66 in.

Jerry Siegel’s horizontal photographs suggest the playful relationship between costume, makeup, drag and gender identity. Each shows a figure in seven stages of transition. In Evah Destruction (from 2018’s REVEAL series), the central photo shows Evah with a hirsute chest, heavily made up but still wigless and wearing nude tights beneath fishnets. Centering Evah between gender identities gives their nonbinary state visual and thematic prominence.

Kisa repurposes material to create parts of her elegant figurative sculptures. Ancestry and Magic nods to her Kenyan roots and suggests lineage and ancestry — an abstracted body with a stylized interior face that suggests the presence of forebears. Tinsley’s Forest Hug shows two humanoid creatures amid vivid colors. One figure reaches to the other, suggesting the artist’s relationship to her mother, who  struggles with a degenerative brain disease. Madeleine Soloway’s Dating/Algorithms/Identity (2018) and In Kyoung Chun’s House With Greek Salad and House With Green Apple (both 2018) create a similar dialogue.

Soloway uses adjectives culled from dating apps to question the terms’ viability. What does it mean to be “political,” “romantic,” “sex-driven” or “spiritual”? How useful are those words in finding a match? Chun’s sculptures suggest architecture and domesticity, subtly questioning social conventions and modern customs of social relationships.

Motion and animation factor into standout works by Drew Tetz and Derek Larson. Tetz’s Psychelangelo is a 3D printed phenaskistoscope (an 1830s animation device) that rotates on a turntable. Viewers use their smartphones to see images of the Virgin Mary’s head from Michelangelo’s Pieta (1498–99). Larson contributes three contemporary narrative animations in which cartoon characters investigate philosophical questions through dialogue that include literature and philosophy professors.