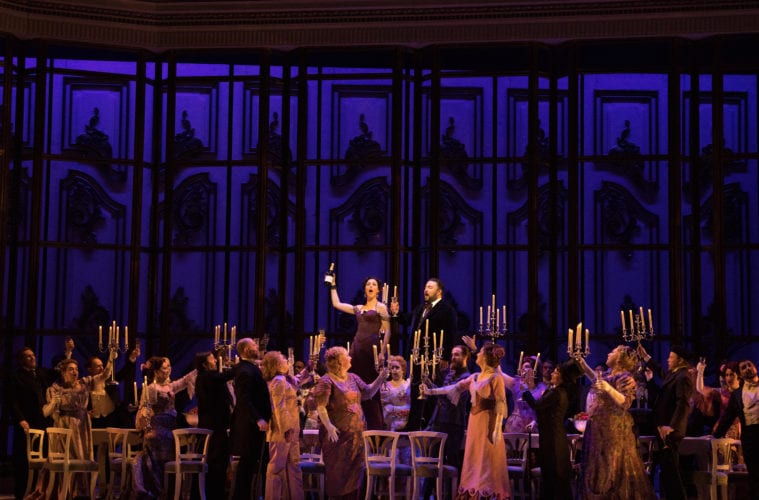 For a production that is staged with regularity around the world — with more than 850 performances last year alone — and embraced fervently wherever it plays, Giuseppe Verdi’s La traviata has not been mounted by the Atlanta Opera since 2013. An excellent new version of the perennial favorite runs through May 5 at the Cobb Energy Performing Arts Centre.

As one of Verdi’s greatest operas, it’s a story that has been told for centuries and inspiring the likes of Pretty Woman, Moulin Rogue and more. This version of La traviata is conducted by Arthur Fagen, the company’s music director. Fagen and his orchestra bring out the best in the celebrated, multi-layered libretto by Francesco Maria Piave, from haunting arias by main character Violetta Valéry (Zuzana Marková) to the numerous duets. Violetta is a courtesan who is sickly and dying of consumption, and via flashback we learn her full story. During a party at her salon, she meets Alfredo (Mario Chang), a young bourgeois who has moved to Paris and pined after Violetta, albeit from afar, for one year. Violetta has wondered to herself if she is capable of finding love, and in the arms of Alfredo, it seems to be a possibility. Three months later, after Violetta has decided to give up her lavish life for the comfort of domesticity, she receives a visit from Alfredo’s father, Giorgio Germont (Fabian Veloz), and is asked to end the relationship. Ultimately, Violetta decides to make a painful sacrifice.

Director Francesca Zambello, who has served as the general director of the Glimmerglass Festival since 2010 and as the artistic director of the Washington National Opera since 2012, initially collaborated with Atlanta Opera on last year’s West Side Story. She has a great vision of the work and provides a fresh look at the classic story. In the modified version, the setting is at the beginning of the 20th century, and the story opens with Violetta looking back on her life from her deathbed.

All around, this is very much a collective effort. Peter Davison’s beautiful, majestic set makes it all believable. After a quick few moments in the hospital, the action turns — almost instantly — to Violetta’s salon before segueing to a country house in Paris. The quiet of the country side — with fog rolling around the trees outside — is in stark contrast to the frenzied life of the pantry beforehand, and it’s here that the production really shines.

Jess Goldstein has come up with more than 100 lavish period costumes, while lighting director Mark McCullough effectively and dramatically sets scene changes. Also worth noting is the choreography by Parker Esse, particularly in the group scenes, complete with gypsies performing in Violetta’s parlor. Chang as Alfredo with Violetta

Soprano Marková is no stranger to the role of Violetta, but this marks her debut U.S. bow. These days, the character is looked at with much more compassion than she was originally, and Marková lets us see the inner turmoil her character is dealing with. Her presence is so strong here, both vocally and physically, that she comes close to dominating the production. If there’s any weakness here, it’s that there seems to be something of a disconnect between Violetta and Alfredo. Marková and Chang work together in exquisite form vocally, especially in “Sempre libera” as they contemplate a life together, but’s what missing is the passion and fire from Alfredo. In Chang’s characterization, Alfredo never seems to look at Violetta like someone he has secretly loved — and it lessens the overall impact.

In the opera’s most beautiful moment, Giorgio confronts Violetta in her new country home while Alfredo is away. Baritone Veloz’s carefully shaded Giorgio isn’t the easy villain, rather a protective father looking out for his family. The pivotal “Dite alla giovine, sì bella e pura” between Violetta and Giorgio is superbly rendered. For a show that boasts such splendor and all-around technical wizardry, this sequence has a startling intimacy where nothing seems to exist but these two making decisions about each other’s future.

La traviata closes a superb 2018–19 season for the Atlanta Opera, and the 39th year has been a grand one indeed. A bold take off, La traviata seems destined to please purists, as well as those who’ve never experienced the classic before.