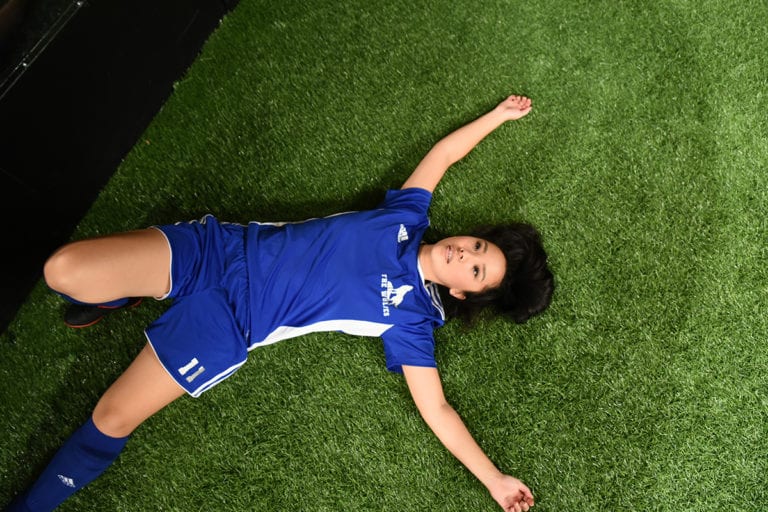 Michelle Pokopac carves a space for herself and other Asian actors

Michelle Pokopac has visited 18th-century England, Planet Soccer Girl and the Himalayas — without ever leaving an Atlanta stage.

The actor recently completed her run as #11 in Sarah DeLappe’s soccer-themed dramatic comedy The Wolves at Horizon Theatre. Each player in the 10-character piece was known by her number, not her name. On top of rehearsals, each performer spent up to eight hours a day, six days a week, perfecting soccer skills.

“I didn’t have to go to the gym for a while, that’s for sure,” says Pokopac, who’s in her mid-20s and from Lawrenceville. “The left and right brain were really fighting with each other,” she says of learning to listen and respond while dribbling or kicking a ball.

You may also have seen Pokopac in On the Verge, a meditative romp on life at Georgia Ensemble Theatre; in a whimsical adaptation of Sense and Sensibility at Synchronicity Theatre; and in several roles at the Alliance Theatre, including the title feline in Play the Play With Cat the Cat and Slur, in which she played three middle-schoolers — a best friend/bookworm type, a worldly alt-rock outcast and a gossipy popular girl.

She’s nothing if not versatile.

When she’s not onstage, she’s also a teaching artist, a part time Alliance box-office employee and a part time standardized patient — a common way for Atlanta performers to act and pay bills.

Since The Wolves closed, she’s focused on auditions for TV pilot season and getting film work. Also high on her to-do list: helping produce a second East by Southeast Festival, an event that supports and develops Asian artists in Atlanta. Pokopac, an only child, is Korean American; her dad is Caucasian, her mom from Seoul, South Korea.

She cofounded East by Southeast with director-educator Pam Joyce and actor Amee Vyas. Their first four-day festival took place last August at Horizon and Aurora theaters. It was designed, Pokopac says, to mix cultures of the East with cultures of Atlanta. It showcased theater, dance, music, spoken word, film and cooking from more than 50 Asian artists.

A second East by Southeast may be staged this summer.

Ethnicity often seems to play a part in when Pokopac is and isn’t cast. “I’ve been told many times that Asian Americans ‘don’t have the talent,’” she says.

In theater specifically, she sees fewer opportunities than others her age and tends to be cast mostly in shows about refugees or war, never as a non-ethnicity-specific “determined young 20-year-old.”

Change may be coming, though. “I was talking to a casting agent recently,” she recalls, “and she said if something called for an all-American girl next door, I would be submitted. That blew my mind.”

A kindergarten dance recital put Pokopac onstage for the first time, but she didn’t discover theater until her freshman year at Suwanee’s Peachtree Ridge High School. There she played mostly maids and ensemble roles but was cast as Donna Johanna (gender-swapped from Don John) in Shakespeare’s Much Ado About Nothing.

She graduated with honors from Columbus State University with a B.F.A. in theater performance and did more roles written for men — the lead detective in Martin McDonagh’s The Pillowman and the slave Caliban in Shakespeare’s The Tempest. The Alliance’s Cat the Cat was her first professional credit.

Her dream role is Susy Hendrix in Frederick Knott’s Wait Until Dark, a 1966 thriller. The character, played on Broadway by Lee Remick and on film by Audrey Hepburn, is a blind Greenwich Village housewife targeted by con men looking for heroin hidden in a doll.

For now, Pokopac is working on the pilot for an indie TV show about a range of American immigrants in their 20s; she plays a Korean pharmacist. She’s also looking to buy a house in town and maybe get a dog. Then, there’s soccer.

The actor, a sports novice until The Wolves, subbed into a league soccer game a couple of weeks ago, nearly scoring a goal. With art imitating life, she’s thinking a jersey just may find its way into her permanent wardrobe.