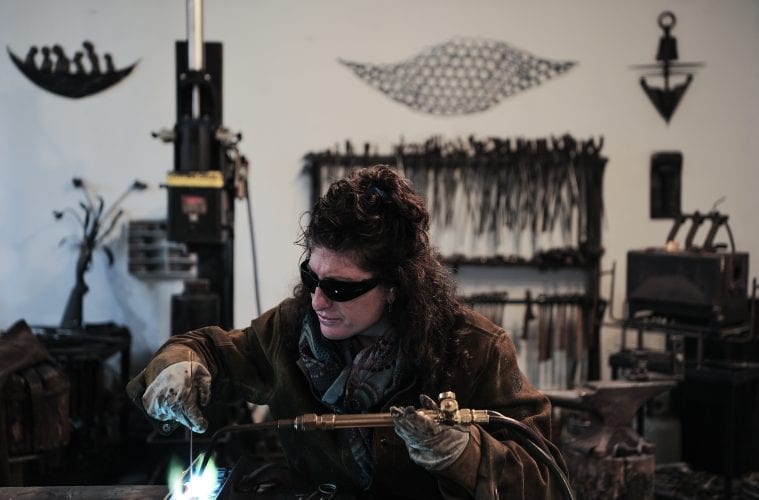 The title of Corrina Sephora’s full-gallery installation Between the Deep Blue Sea and the Universe implies a passage from the mythic depths to the farthest reaches of the highest, and the title is accurate. Inspired by experiences following the death of her mother, the show (which opens at Mason Fine Art on Thursday, January 10) is a symbolic journey that begins at the cellular level and ends at the edge of an imagined cosmos.

Sephora has long used symbols of transformation and ascent in her work, and the motif of the ladder, used often in her metal sculptures, recurs here — an emblem of spiritual transformation through effort as well as a link between lower and higher realms of being. The labor implied by the ladders contrasts, perhaps, with the effortless flight of the ravens that appear here in sculptural multiples. They symbolize spiritual messengers — a theme well known in the world’s religions, but one that reflects Sephora’s actual uncanny encounter with just such a bird on the day before her mother’s death from cancer.

The circular paintings ((tondos, to use the art historical term for a form known to Atlantans from past shows by Brooklyn artist KAWS and Lori Lejeune) that swirl upward on the gallery walls are clearly references to the starry heavens and may remind some viewers of the night-sky paintings of Vija Celmins, although Sephora refers specifically to the influence of Anselm Kiefer’s star maps inscribed on sheets of lead. 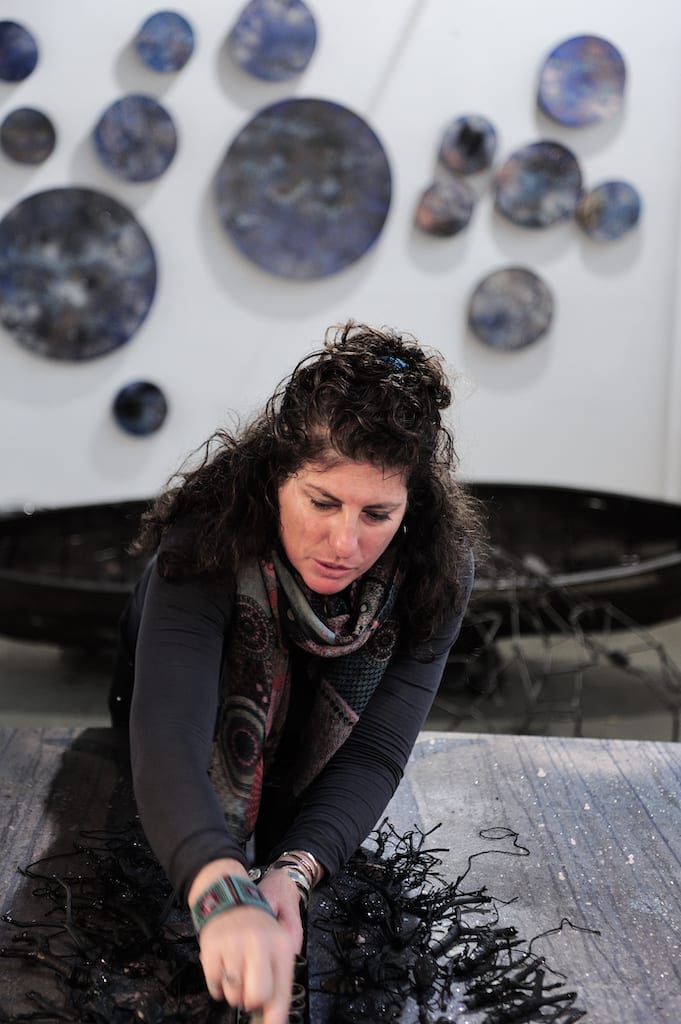 Whatever the influences, Sephora has incorporated them into her personal mythology, which is a blend of Native American spirituality (her father once lived with the Hopi, and she grew up experiencing sweat lodges in New Hampshire) and close observation of coincidences and significant occurrences that form an individual path, a road of alchemical or shamanic transmutation of the self from undeveloped rawness to higher states of being.

Her return to non-sculptural artistic media she never completely abandoned reflects a search for new depths and heights as well. And all this comes at a moment when her skill at sculptured metalworking is being particularly rewarded, with a commission from the City of Decatur only the most recent accolade.

But a meaningful response to the experiences of mystery and intuitive growth that followed in the wake of her mother’s death, she felt, required returning to old skills to take them in new and previously untried directions while continuing the symbolic practices for which she has become best known.

Sephora has described the exhibition as “a meditation in the making through midnight dreaming,” and it is exactly that — a meditation through the act of making combined with dreaming, an immaterial dream now made solid images suggesting imperceptible things. Surrounding us in the gallery, they invite our own imaginative participation in an invisible form of travel that begins in bodily experience and ends, at least in imagination, in what Sephora calls “a realm where the physical and spiritual intertwine.”