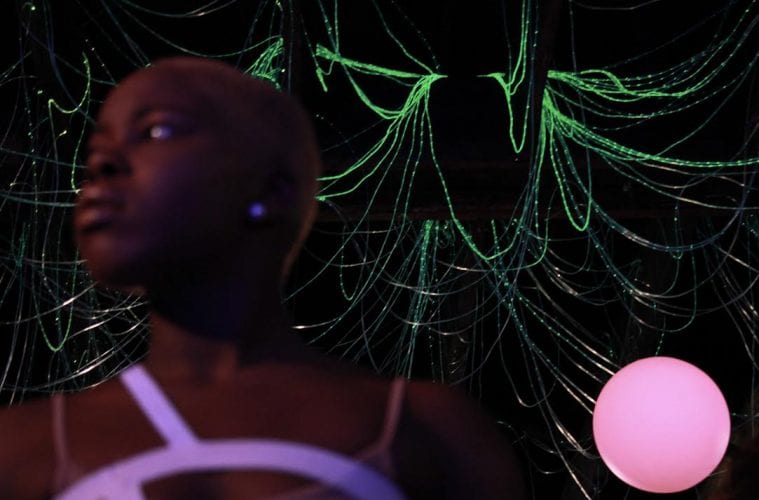 In the fall of 2017, Spelman College unveiled a new department of dance performance and choreography. Led by department chair T. Lang, the department also has a new mission: to develop the next generation of dance students into industry-leading creators and innovators. A newly built-out studio called the Dance Lab, located off campus in the West End neighborhood, offers students the chance to interact with and engage the Atlanta community around them. These young dance-makers will have the chance to showcase both their prodigious talent and their newfound neighborhood connections in Meet Me on the Porch, a performance installation set on the porches of three South Gordon Street residences on March 24 and 25. The performance will include choreography by Spelman dance faculty Kathleen Wessel and Julie B. Johnson, along with students Kibriya Carter and Qadry Manns.

On a recent Wednesday afternoon, a small class of Spelman College women sat in a circle on a vinyl dance floor, papers and notebooks spread in front of their outstretched legs. Led by Wessel (Full disclosure: Wessel is an ArtsATL contributor), the women passed their writing assignments to the left to begin a feedback session. Wessel was unobtrusive yet encouraging as she guided the readers to assess each writer’s voice, tone and potential audience. Without judgment, she asked, “Are you interested in reading more?”

One of a series of informal writing assignments for this Critical Writing for Dance class, these short pieces were intended as first blog entries. Refreshingly personal in their point of view, these writings covered a wide range of topics: the choreography of Bill T. Jones; surviving breakups and stress; racism in dance competitions; how to decide whether to be a doctor or a dancer. This last dilemma, about how to make a living in dance post-graduation, is both a question posed by young people all over the country and one that the faculty of this dance program aim to answer. In 2016, T. Lang, then a tenure track professor in the department of drama and dance as well as artistic director of her own local company T. Lang Dance, got the call to form her dream team for Spelman. She immediately gathered together Wessel (who has taught there since 2008), Dr. Veta Goler, Dr. Julie B. Johnson, Omelika Kuumba and Victor Rojas (currently on tour with Lady Gaga).

The impetus behind the new department and bachelor of arts degree came from a professional reality that this group found hard to ignore: the demands on modern artists require more than just the great dance technique taught in traditional conservatory-style programs. Versatility, exceptional communication skills and an aptitude for technology are now skills as essential as flexibility, musicality and coordination. Responding to the gender and racial privilege gap in the arts, the new rationale seeks to develop the women of the African diaspora beyond mere dancers into creative leaders, able to alter the current landscape.

Spelman College was founded in 1881 as the Atlanta Baptist Female Seminary. At a time when many historically black colleges and universities struggle with enrollment and finances, Spelman’s mission to educate and empower women of African descent remains vibrant and relevant, in part through new programs like this.

The philosophy of the program rests on a strong foundation of black feminist theory. Using this lens, the works of notable black writers and activists, such as bell hooks (the pen name of Gloria Jean Watkins) and Audre Lorde, ground and motivate these women of color, helping to develop critical-thinking skills and a sense of identity both inside and outside of the studio. For Kibriya Cater, class of 2018, Lorde was an inspiration: “Knowing what I know about Black feminism and what it means to be a woman of color in dance makes me feel obligated to continue the work of the pioneers who have paved the way for me and continue to create that avenue for Black dancers.”

The references to cultural pioneers reach further and wider in Lang’s Dance Technique class, where students grappled with maintaining both a one-leg balance and a deep curve of the spine. Lang weaved through them, calling out to one woman, “Here is your Martha Graham moment.” Making the note more contemporary for another, she pushed, “Crump it out here.” When the students broke down a leap, arms flinging back behind them, she shouted, “This is your ode to Kyle [Abraham].” They learned phrases as Lang improvised movement. Then, through a process that included “workshopping” — investigating the movements on a deeper level and finding them in their own bodies — they performed in groups.

“How many ways can you be black? How many ways can you be free?” Lang asked before she switched the music from R&B to an ambient electronic soundscape. Similar to the writing class, the dancing excelled as it became more personal and individual. There was a range of ability in the room as one might expect with a liberal arts program that does not require auditions like a conservatory. Yet, once more improvisation was layered in, the playing field of talent leveled at a higher bar. Toward the end of the class, Lang winnowed them down to duets, and the dancers worked on connecting with a partner. Those not dancing grabbed their phones to record videos.

While most of the dance students are degree candidates, the program also attracts some who are not, like 19-year-old Thulani Vereen, who is a computer science major. “Algorithms are made of steps and taking ballet barre feels like the same procedure, just physical,” explains Vereen. “Humans are basically like computers.”

While Vereen has used movement to help her build an app for a computer science competition, she has inspired Wessel to think about choreography in new ways. This fertile mix of expertise and alternate paths adds to the networking possibilities for future graduates and enables the department to incorporate creative use of technologies. Plans are already in place for a new Center for Arts & Innovation so art, technology, entrepreneurship and science can better converge on campus.

Later, at an interactive performance showcase called Studio Sessions//Draft 3, videos taken from rehearsals inside and outside in the surrounding neighborhood were projected on the walls of the main dance studio. In an anteroom studio, an audio interview with a neighbor on adjacent Gordon Street played, her family’s genealogy serving as a soundtrack for dancing and mingling. The young women were confident as they responded to prompts from Wessel and Johnson, dancing in a pop-up fashion in close quarters with the audience.

Two student choreographers observed from a makeshift sound booth. In between dances, the audience participated by answering questions of what home, community and gentrification meant to them with sticky notes. As the evening drew to a close, an emerging sense of experimentation, of how dance can utilize both history and technology to become a source for community engagement, and mostly, of excitement for the future of these artists, pervaded.