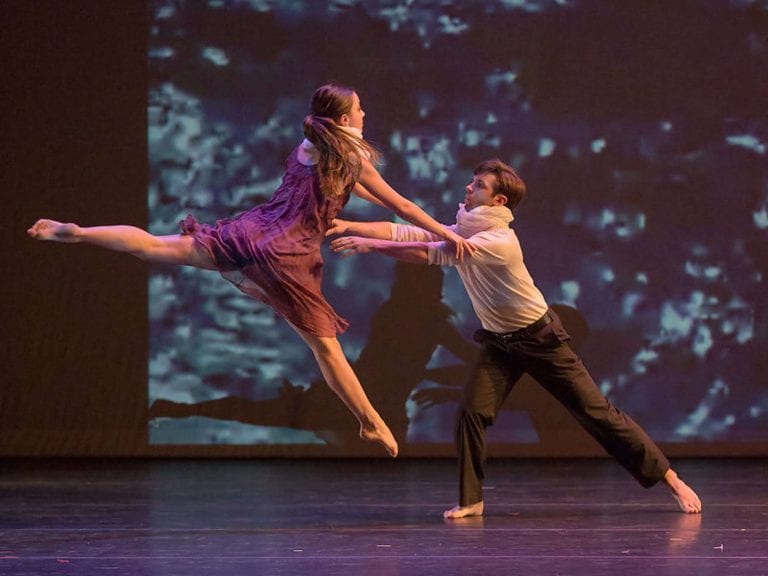 To celebrate its 10th anniversary, Dance Canvas invited back choreographers from its past. (Photos by Richard Calmes)

Dance Canvas will celebrate 10 years as showcase for emerging choreographers

In a Midtown studio, dancers are straddling ballet barres, clumped in hushed semi-circles, eyes alive or closed with headphones plugged in. The bonds of the dance rehearsal are clearly felt — body to body, choreographer to dancer and director to program — especially six months into a process of feedback and showings.

Angela Harris, executive artistic director of Dance Canvas, which embarks on its 10th anniversary this year, upholds this collaborative environment as a larger ideal for the city’s growing dance scene. When Harris began the company a decade ago as an emerging artist herself, she sought to fill a gap for other local choreographers and performers.

“Every other industry has an entry level position where you can work your way up once you have the skills,” says Harris. “Choreographers don’t have an entry level place. They are relegated to unconventional spaces or working on students, and oftentimes there is no way for independent choreographers to have work presented on a large stage. An organization like Dance Canvas helps to make that affordable.”

Harris started small. She asked a few friends to be part of a choreography showcase, found them rehearsal space and dancers and presented their work to an audience of 150 at the Fourteenth Street Playhouse. The company has weathered and grown with venue changes and funding struggles, and has witnessed its fair share of successes, given Harris’ tenacity.

By the numbers, Dance Canvas has provided jobs to about 40 working artists per year. The organization has produced 78 choreographers, premiered 92 new works, reached out to over 5,000 students and performed for 10,000 people.

Envisioning how to commemorate such an explosive 10 years, Harris invited 10 choreographers from past seasons to present work on March 23–24 at the Ferst Center for the Arts at Georgia Tech.

The program is as diverse and expansive as the city that surrounds it. Harris, in tandem with Vanessa Chisolm, will present a pointe and tap piece emphasizing collaboration across dance forms. The new voices of Lindsay Fritz, a 2017 Dance Canvas choreographer, and Lara Davis, a DC NEXT alumnus, will appear alongside works by acclaimed choreographers such as Lonnie Davis.

There are also the hard edges and hive-mind driven movement of Britt Fishel, a screen dance artist and codirector of the Atlanta Dance Collective, a company Dance Canvas first presented in 2014. Incorporating wall projections and screen technology with sociological research on health and codependency, Fishel says the space and resources at Georgia Tech afford her an opportunity she wouldn’t have otherwise.

Many of these returning choreographers represent how Harris sees Dance Canvas supporting and launching choreographers into the national spotlight. Annalee Traylor, named in Dance Magazine’s 25 to Watch in 2012, will debut an all-men’s quintet, cheeky in its theatrical presentation of masculinity. Dance Magazine has also named Juel D. Lane as one of 25 to Watch in 2013. His piece Moments of Dis was performed by Atlanta Ballet in 2012, and he recently debuted work on Ailey II at the Rialto. He will appear as a featured dancer during NBC’s Jesus Christ Superstar Live in Concert this April.

“Through Dance Canvas I’ve been able to face my fears as a choreographer,” said Lane. “I’m able to cook it up and put it out and if people don’t like it, I’m going to keep working on the ingredients.”

Lane’s movement for this showcase was inspired by artist Ernie Barnes’ The Maestro and features live accompaniment onstage from Munir Zakee. In rehearsals, Lane’s soloist, Rebekah Pleasant, catches finger wisps inside a soft piano score, until it all comes unspooled with jerks, shakes and legs split apart, hovering millimeters above the stage. Pleasant holds onto a tenuous thread, pinching viewers between her thumb and forefinger.

Dana Woodruff’s Vectors stampedes in with a playground of suspension, balancing Marci Lefkoff’s tender duet between Full Radius company members Demarco Sleeper and Mckenzie Beaverson — Sleeper brushing his fingertips along the marley to meet the back of Beaverson’s neck as she falls blindly backward.

A women’s trio arrives in a flurry of motion for Rebirth by Jennifer Davis. Crumpling the upper body, circling the torso, the women’s hands make hard stops to push away from the body, or perhaps push onward to the future. It’s peppered with the lamentations and pleadings of Martha Graham, revealing what immense strength is required in moments of strain and struggle in women helping other women, skirts released in liberation, silk carved from stone.

Davis, artistic director of City Gate Dance Theater, debuted with Dance Canvas in 2009, which served as a launchpad for the company she created alongside late husband and Atlanta dance icon Robert E. Mason II. She sees what a community can achieve through honest and open feedback, and eagerly anticipates the continued vibrancy of Dance Canvas and its ripple effect on Atlanta’s dance community.

“I see all these different creators coming together and it is really starting to create a culture down here,” says Davis. “It’s like how we were all sitting in that room engulfed in one piece. We were all just enjoying that one piece and left feeling a different way. I see in five or ten years from now so many more people from the Atlanta community being able to feel that way.”

For Harris, no two years of Dance Canvas resemble one another. Walking out onstage to give her post-show speech, she does not rest on the company’s laurels, but buzzes with an urgency to continue evolving and spur audiences to engage with all the variety Atlanta dance offers up.

“One thing I tell our audiences is that you might not like all the pieces,” says Harris. “You are going to leave and comment on each of the pieces, but that is what makes you a part of this performance. That is how we get the conversation started.”