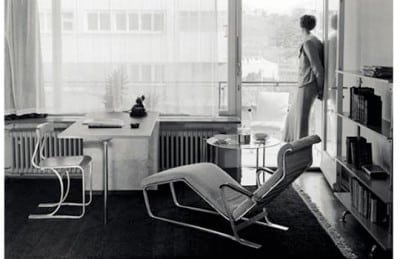 Review: In two locations, a retrospective on Marcel Breuer, a godfather of modern design

Marcel Breuer was in his 20s, working at the Bauhaus in Germany, when he created the chairs still admired as icons of modern design. He was a venerated American architect by the time Atlanta’s Central Library, his last commission, opened downtown in 1980.

“Marcel Breuer: Design and Architecture,” a retrospective hosted by the Atlanta-Fulton Public Library System and the Museum of Design Atlanta, examines those bookends and the fruitful career in between.

It vivifies his achievements through vintage furniture, architectural models and plentiful photographs. But just as importantly, and in contrast to the High Museum of Art’s brochure-like John Portman exhibition, it analyzes them. The curators point out Breuer’s creative principles and propensities, offering insights that help the visitor understand his work, both individually and collectively.

Organized by Germany’s Vitra Design Museum, the traveling exhibition is divided between the two hosts. Although this arrangement makes for a somewhat choppy experience, it does enable viewers to actually experience a Breuer building in three dimensions.

To see the show somewhat chronologically, start at MODA, which houses the tubular-steel furniture that is arguably his most enduring legacy. The text says Breuer “invented” the type. The idea, however, was in the air. He was clearly influenced by the 1918 Reitveld Chair (on view at the High Museum), in which Dutchman Gerrit Reitveld reduced the chair to component planes, emphasizing space as opposed to mass. And several other designers were experimenting with tubular steel at about the same time.

Perhaps the point is that Breuer’s elegant Wassily and Cesca chairs became the “It” versions: classic embodiments of modernist principles. They are still in production, and their DNA is evident in generations of ensuing designs.

Breuer carried the values the chairs represent — the form-follows-function ethos, lightness, cantilevers — into the houses that were the first chapter of his architectural practice, which started in earnest after he emigrated to America in 1937.

MODA’s upstairs gallery, which represents this work through four projects, presents architectural motifs that will recur throughout his practice, such as the “lying rectangle,” whose long skinny proportions are a leitmotif evident in cabinetry, ribbon windows and even the proportions of structures.

By the 1950s, his career had expanded to larger commissions in the wide array of building types surveyed on the main floor of the Atlanta Central Library. Among the most interesting are Breuer’s Midwestern ecclesiastical projects, which are persuasive expressions of his ability to manipulate concrete to sculptural and textural effect.

The Atlanta library — like its antecedent, his 1966 Whitney Museum of American Art in New York — is “Egyptian,” to use Breuer’s term, in its solid volumetric form. Breuer reduces the mass by strategic nips and tucks and punctures it with carefully placed and variously shaped windows. The muscular concrete staircase off the lobby typifies his sculptural approach.

Yet it’s a composition best appreciated (and best-looking) as an object and from a bit of a distance, a view that one has to make a special effort to find on the narrow streets surrounding the building. At ground level, the Atlanta library can seem spartan and forbidding, which puts it at odds with current values of street-friendliness and openness.

Hence the lack of fondness for the building, which Fulton County Commissioner Robb Pitts exploited to help make a case to build a new library. Breuer admirers worry that the building might be razed. According to library system Director John Szabo, the recession and lack of support have all but killed the prospect of a new building.

The issue of submitting to the vagaries of fashion remains, however. Remembering the many bulldozed buildings that we now mourn should help gird against the vicissitudes of taste.

So should exhibitions like this. Even if this show doesn’t change one’s emotional response to the library, it can lead viewers to appreciate its value through a better understanding of the building, its architect and their place in history.

P.S. If you are in New York between November 8 and January 25, you can see Breuer in the context of his peers at the Museum of Modern Art, which is organizing “Bauhaus 1919-1933: Workshops for Modernity.”