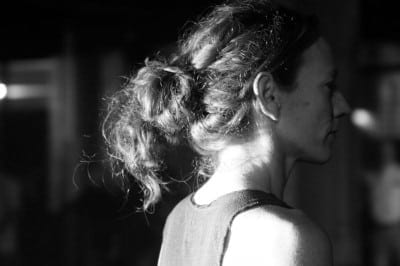 Since the site-specific work’s premiere at the multi-arts Le Flash-Atlanta event, “pour” has created a buzz around town. I reviewed it for ArtsCriticATL here (and don’t miss the smart discussion in the comments). Talk has spread to New York with last week’s premiere of Stallings’ “The Plum Line” at the Wave Rising Festival in Brooklyn.

Later this month, Stallings’ “First Person” will premiere in an event called “Chakra,” an evening of faculty and guest choreography performed by students at Kennesaw State University. And not yet announced: gloATL will perform a new chamber work at the High Museum of Art on Dec. 10.

Recently, Stallings took time out of a full schedule to reflect on “pour.”

CBP: About “pour” — people would like to hear your perspective on the piece and the process of creating it.

LS: When I think about it now, my bones actually ache a little. With every creative process, there’s a sense that you are opening yourself up to the unknowns, and with “pour” this was certainly the case. It was extremely challenging on every level — interior and exterior forces, with the hands quite full.

I had a sense that gloATL was going to go through a bit of a growing spell during the creation period, to pull the inseam — that which holds us together — apart just a little. For what we are beginning to reflect on in our work is the oxygen level — in the lungs, the loins. We are finding that these levels are constantly shifting, which is morphing, changing the language of movement. The awareness of this happening has much to do with the Gaga [dance technique]. And I sensed that we were going to experience this new level of oxygen, of inhaling and exhaling, a sustaining of efficiency.

Prior to beginning rehearsals, I [usually] spent some time in the area we would be creating with and in — alone time — which I do with every work. This was different. Immediately I felt something crawling up my back, which I would subsequently feel during the entire process. As the artist, the moment I chose to be intimate with the space, I felt something cling to my lower spine and start finding its way up. Possibly that’s what came out in the work. And this sense that something was “clung” to my back was not always uncomfortable. It is the energy that’s tied directly to the history of Castleberry Hill, “Snake Nation.”

CBP: How did that history or those energies affect your choreography?

LS: We’re talking about energy inside a very specific community that’s being altered, energy from the past, and the now of that energy. With Castleberry Hill we are talking about a large shift in population, a shift in demographics, a huge change in landscape in a very short amount of time. This is going to morph people. And it is going to bring up a lot of internal thoughts, questions. The fascinating thing is how people deal with those thoughts.

And I don’t know the answer to that, for everyone makes their own choices. But I know how I utilized that enormous reservoir of energy. In Castleberry Hill, you have a sense that there is authenticity — underneath a lot of stuff, there are seeds. And I think we found ourselves moving around those seeds, those energy sources. Naturally, sometimes there was conflict, sometimes there was harmony.

Some of the practical factors that are involved in creating site-specific, three-dimensional art, as in the space you create in, the needed time, the neighborhood citizens you share the creative space with…there were challenges, indeed great big ones…change of original location (that I [had been] insanely in love with) days before the premiere, police being dispatched by neighborhood residents to find out who we were, what we were doing dancing in the alley just three days before the premiere. Fascinating. And there were more.

But that is all a part of creating work that is a fresh, new way for a community — Atlanta — to experience art, dance, movement. They are all learning curves, as the curators and I would later discuss wholeheartedly. As long as everyone learns from these things, moves forward, I am willing to risk the arduous moments — issues that gloATL’s work conjures up — in order to move forward inch by inch as a community.

We do what we do to dissolve the contradictions. We make the work we do, understanding that it’s going to lend itself to a lot of questions and passion. That’s what Gaga does. It’s this crazy, delicious movement system of mapping the flesh and bones.  And the human senses are literally connected to everything that is happening, not only for the participant [dancer], but the onlookers. This is going to bring up a lot of human expression.

When distractions arise in a creative process, the artistic aim cannot alter inside of a work. It has to be consistent. There’s too many people that depend on you, and you’re working with youngsters, with the next generation of extraordinary artists. Depending on the creation, my creative arrows can be soft and pliable, able to make their way through wind, cut and slice and get around corners, yet very fluid and organic. And then there are those processes where you’re like, “I need to be in Pittsburgh, and I need to get the best steel. Because this arrow here has to be the thickest steel one can find.”

That was the arrow for “pour.” There was no way anyone was going to bend it. I had to do that in order to survive, so to keep everyone in the boat.

(Read part two of this interview tomorrow on ArtsCriticATL.com)