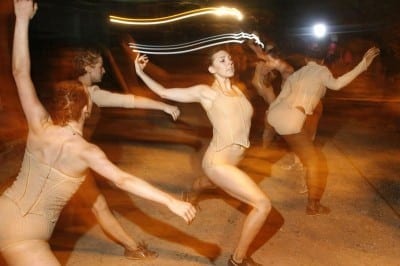 Interview (Part 2): Choreographer Lauri Stallings on dance, gravity and the wonders of Atlanta

Yesterday, we began an interview with Atlanta choreographer Lauri Stallings, focusing on her dance company, gloATL, and on “pour,” a site-specific work that was part of last month’s Le Flash-Atlanta and broke new ground in the urban Castleberry Hill neighborhood. Here’s the second and final part of that conversation:

CBP: How was “pour” received?

LS: I just couldn’t say enough about this city and its ability to open itself to gloATL. We’ve been extremely fortunate. But we understand that we are responding and hence we’re a part of a [universal] cultural re-definement. And certainly, we’re just a very small part. But we’re a part of it. And we are aware of it. We’re passionate, and we’re willing to do the work and willing to do the laboratory, and we trust it. This glorious city, they understand. I know that the time is now for this. (At top: Nicole Johnson, photo by Julie Jones.)

CBP: In the process of making “pour,” what did you learn?

LS: This was one of those that you walk away with some — well, let’s just say that the toolbox grew. And actually, some of the tools were taken out — they’re not necessary anymore. There was a deep re-evaluation. My sense of gravity dropped about three and a half inches. It’s at a much lower place inside of me. In the past, I was taught to shift gravity around in the body, almost like a bouncing ball, and at any given time the point of gravity can be in the fingertip or the left eye or down in the right sitting bone. But post-“pour,” I decided that maybe it was just as important that I keep that center of gravity in one spot for a while. And it is a much lower spot. That’s a big deal for dancemakers, because basically what we do all day is work with gravity. (“Blurred corsets” photo by Adam Davila.)

Always, the intent is fundamentally to create an honest work, but you have specific intent. With “pour,” all of those “specifics” had enormous detours along the way. And I don’t know that one found a route that they could remain consistent with during the process. I was constantly having to morph and work through and around things, and that was a huge challenge. Daily, as the dancemaker, I was having to make spatial, musical, flesh alterations. I mean it was just constant. So what have I learned from that? (Bottom photo: Lauri Stallings wields her own camera to capture “pour.” Photo by Julie Johnson.)

I guess people see our work as tending to blur the lines; they think the works are brave, and very forward motion. But, realize that we are just doing and being who we are. We are available for it all.