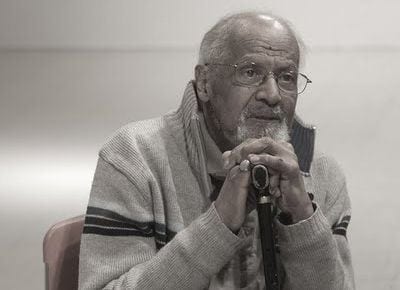 Photographer Roy DeCarava, who made Harlem his beat in a long and decorated career, died October 27 at the age of 89.

Making photographs was not DeCarava’s only contribution to art. He was founding director of the Kamoinge Workshop, formed in 1963 to address the underrepresentation of black photographers in the art world, and mentored a generation of aspiring African-American artists.

In fact, Edward S. Spriggs, who wrote me shortly after his friend’s death, noted that DeCarava never missed an opening for one of his charges during Spriggs’ tenure (1969-75) as director of the Studio Museum in Harlem.

Here follows a heartfelt remembrance from Spriggs, whom you may know as founding director of the Hammonds House in West End:

“Roy’s one-man show, ‘Thru Black Eyes,’ utilized a portrait of his longtime friend Norman Lewis as its signature piece. Both shared a deep sense of social commitment since their grounding in the Harlem art workshops of their youth. Both were living bridges between the artists of the sixties and the WPA and post-WWII generation.

“Here’s to Roy DeCarava, who, over the years, was an aesthetic beacon and the basis of a definitive Black photographic canon. His impact extends way beyond the New York-based core Kamoinge Workshop. It extended to an unsung field of art photographers such as Jim Hinton, Bobby Senstack, Fundi Billy Abernathy, Bob Greene, Dough Harris, Rufus Hinton, Coreen Simpson, Carrie Mae Weems, Dawoud Bey, C. Daniel Dawson — and the list could go on. His through-the-viewfinder composing-editing principle guided a virtually unsung generation of photographers.

“I think about his artistic and business integrity and wish more visual artists could have been exposed to him and understood his uncompromising commitment to craft, work ethic and ideals.

“One does not have to proclaim that his work is greater than that of [Gordon] Parks or [James] Van Der Zee. Above all else he made Art, not documentary photography or sociological statements. He remained true to himself and trusting of his insights.

“May his Ancestors welcome him into their realm and he continue to bless our journey.”