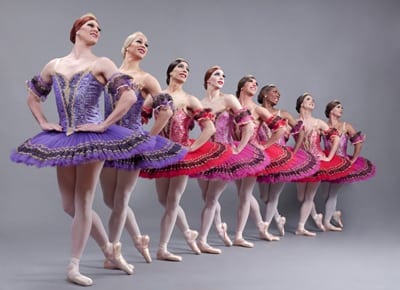 When Tory Dobrin joined Les Ballets Trockadero de Monte Carlo in the early 1980’s, friends warned the dancer that the all-male travesty troupe was a “career killer.” Formed in 1974 as an expression of the gay liberation movement, the company was at that time attracting older male ballet dancers set on finishing their careers dancing the Trocks’ broad parodies of ballet’s over-the top mannerisms and outmoded conventions. Back then, the ballet spoofs — like the dancers’ delicate tutus and oversize pointe shoes — were custom made for the troupe. Today, there’s no need to tailor ballets for the Trocks, and dancers like Atlanta native Calvin Gentry, who will perform with the Trocks on Sunday evening at the Ferst Center for the Arts, seek the touring company as a professional destination.

In a preview of the Trocks for the AJC, I wrote, “Gentry is an example of the younger, stronger, classically trained dancers [that] the 36-year-old comedy ballet company has attracted since the early 1990s. This surge in skill has enabled the troupe to perform bona fide stagings — in parody — of ballets from the classical canon.”

The company’s current repertory reads like a list of essential classics, including “Paquita,” after Marius Petipa, “Swan Lake, Act II” after Lev Ivanov and “Les Sylphides” by Michel Fokine. Recently in Monte Carlo, the Trocks danced Léonide Massine’s glamorous “Gaîté Parisienne” in the same opera house where the Ballet Russe de Monte Carlo — the troupe’s namesake and beloved subject of parody — gave the ballet its premiere some 70 years ago.

Sunday, in addition to their signature send-up of “Swan Lake,” the drag company will spoof Merce Cunningham and John Cage with “Patterns in Space,” as well as play up the charms of 19th century balleticized folk dancing in “La Vivandiere” and flirt with a hot, Cuban style of classicism in “Majisimas.” For the Trocks, artistic quality is escalating due to artistically and technically challenging ballets like this — expertly coached and performed with skill, reverence and enthusiasm.

Gentry commented on how exciting it’s been to learn and perform the great ballets he’s grown up on. He especially enjoys dancing the female roles. When I asked what he enjoys about them, Gentry replied, “You’re a guy, and you’re in this character, and you’re portraying something that you’re so … not — physically and everything. You’re vulnerable, but it’s exciting, because there aren’t the pressures of having to be perfect. We’re allowed to be funny and bring something extra to it that you would never see at the Kirov or the Bolshoi. So that’s what makes it fun, being able to bring who you are and your ballerina character to it.”