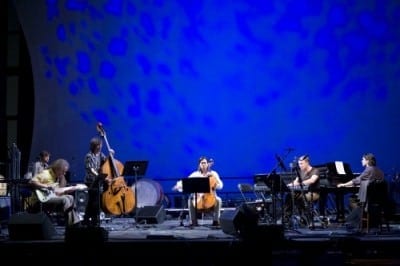 Review: Bang on a Can All-Stars and Wilco’s Glenn Kotche at Emory’s Schwartz Center

The Bang on a Can All-Stars brought an inspired show Friday evening to Emory University’s Schwartz Center and, like the ghosts of Christmases past, present and future, it came in three distinct parts that told a wider story.

As I wrote in an overview before the concert, “Bang on a Can was founded in the mid-1980s by three composers — Julia Wolfe, Michael Gordon and David Lang — who were then outside the symphonic mainstream. In their music and their presentations, they tapped the style and mood of elegant Minimalist masters like Steve Reich and Philip Glass, but brought a scruffier, grungier, rock-inspired aesthetic to the culture. The organization was soon presenting festivals and annual 12-hour marathons of contemporary music. It formed its own record label, Cantaloupe Music. A touring ensemble, the All-Stars, took the stuff around the world in live performances.” 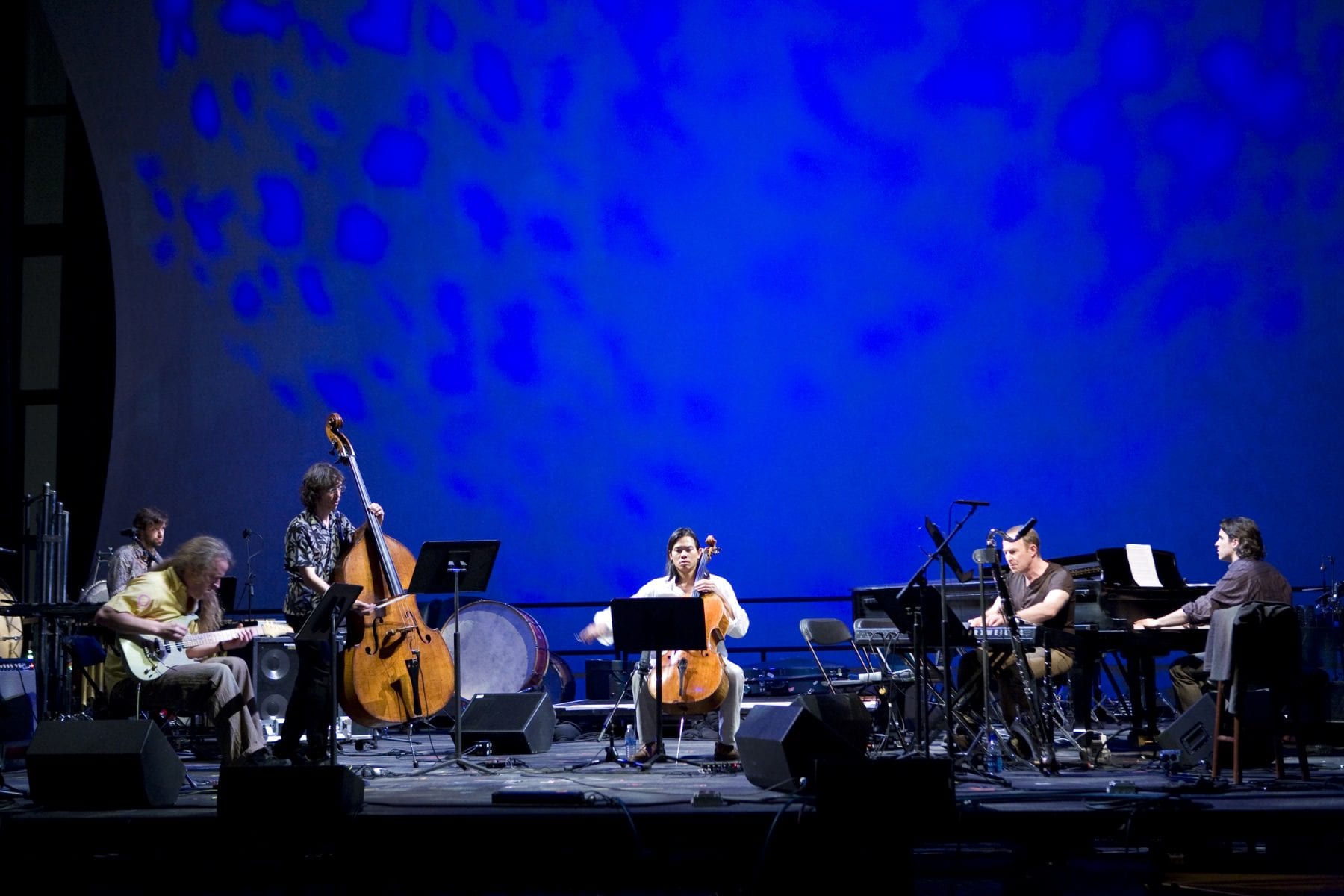 Bang on a Can All-Stars, in performance from 2007. Photo by Stephanie Berger

The Friday show’s first half brought forth the Ghost of BoaC Present with music by its chieftains. Evan Ziporyn is the group’s stellar clarinetist, an M.I.T. professor and noted composer. He also acted as emcee, introducing each work. They opened with a suite from his “ShadowBang,” a gorgeous, time-suspending shadow-puppet opera infused with the sound and spirit of traditional Balinese gamelan but scored for the All-Stars’ idiosyncratic combination of clarinet, electric guitar, cello, double bass, piano and percussion. 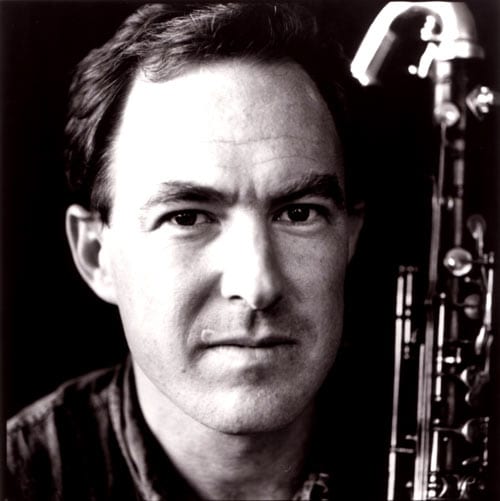 The “Angkat” movement unfurled as sultry clarinet lines that were as liquid as a virtuoso bird’s song and backed by a jazzy, asymetrical bass line. Sweet dissonances over drip-drip-drip chords from the piano and electric guitar imbued “Ocean” with the atmosphere of a nocturne. The third movement, “Meditasi,” rang out serenely with the low gongs of an unfathomably ancient culture. Rock ‘n’ roll drums kick in for the finale, “Head,” which was louder and more powerful and also more predictable.

Bang co-founder Michael Gordon’s “For Madeline” is an eight-minute lament for his mother. As a composer, Gordon usually takes as much from the Sex Pistols as from Conlon Nancarrow — with cleverly abrasive sonorities, clashing polyrhythms, unstoppable momentum and a cheerful (and perhaps self-conscious) fuck-you attitude. 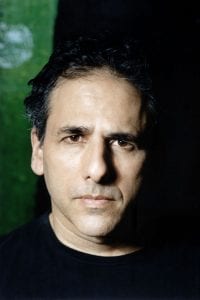 “For Madeline” comes from someplace else. Gently repeated piano, metallophone and cello chords set the clock ticking till the sound grows hazy, with rapid chatter in the background. The clarinet brings a klezmer-rich accent to the mix, and suddenly you realize there’s a life journey in the music, including low bass rumbles and in-the-distance droning sirens, the sort associated with 1940s air raids and the Holocaust. The narrative — if that’s what it is — grows thicker, more anxious as the music speeds up and slows down simultaneously (Nancarrow would be impressed). The abrupt stillness flitters with the metabolism of a hummingbird, and the work fades to darkness. It’s a small masterpiece.

(And mark your calendar: Sonic Generator, an Atlanta new-music ensemble, will perform Michael Gordon’s music in a free concert Feb. 8 at the Woodruff Arts Center. I’ll interview the composer on stage.)

Before launching into “Sunray” — music by David Lang, another BoaC co-founder — Ziporyn quipped, “David wrote this piece for us back when he was a nobody. That was, like, three years ago.” Everyone on stage laughed merrily.

The joke tells us as much about the BoaC mindset as about the group’s reputation. After a couple of decades on the fringe, Bang on a Can has somewhat recently been certified as a major player in the classical music establishment — at least since Lang premiered his heart-breaking cantata “The Little Match Girl Passion,” which won the 2008 Pulitzer Prize for Music and was a hit recording on the Harmonia Mundi label. (For more on this, read ArtsCriticATL’s recent interview with David Lang.)

“Sunray” starts as an intricate spiderweb, glistening in the morning light. It’s a long moment eternal — exotic and out of time — but eventually inflates into a hard-rockesque anthem. Its problematic ending seemed designed to elicit a “Dude, you rock!” response and felt like the solution to a problem — how should this work end? — more than an organic conclusion.

After intermission, a newer wave of Bang on a Can composer took the stage — perhaps a Ghost of its Future. Glenn Kotche is a conservatory-trained percussionist and the drummer of Wilco, a popular Chicago indie-roots-rock band. As Lang told me, “One of our goals from the beginning was to find people outside our world and invite them in, musicians from folk and jazz and rock. Glenn seemed like a natural fit.” 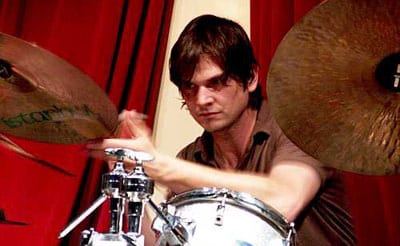 He’s a great catch, to be sure. Kotche (above) was billed as the concert’s headliner the way a hunter displays an eight-point buck. Yet Kotche’s “Mobile” and “Snap” both offered an initial visceral charge but, when that wore off, they felt like the least compelling works on the program. One was a sonic goulash that seriously lacked salt; the other started as a lovely watercolor with layer upon layer of color and rhythm and texture added till it all sounded brown.

The older generation was represented by two spins on Steve Reich: “Clapping Music Variations” listing authorship as Kotche-Reich, and a two-drummer version of Reich’s “Music for Pieces of Wood,” arranged by BoaC percussionist David Cossin.