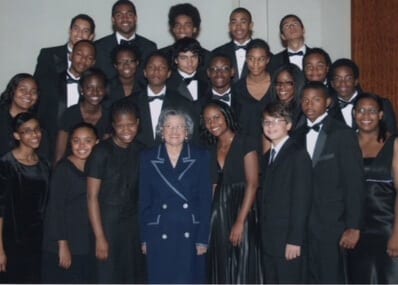 As a handful of musicians leave an early rehearsal at the Woodruff Arts Center on a weekday morning, the sight of a petite, elegant woman crossing the lobby in a high-collared white lace shirt, navy blue pantsuit and black flats provokes stares and whispers. The object of the attention and adoration is Azira G. Hill, who remains mostly oblivious to the buzz she’s creating until a pair of musicians break rank to give her the rock-star treatment. The more extroverted of the two embraces her, while a more reserved Nathan Zgonc, associate principal trombonist with the Atlanta Symphony, introduces himself and thanks her for founding the Talent Development Program (TDP).

“One of my students just got accepted to Juilliard!” he exclaims. “And another will be heading off to Curtis next fall. My wife is setting up a similar program for inner city grade and middle school children in Atlanta, and we already have a space set up. Can she contact you?” Clearly touched by Zgonc’s enthusiasm, Hill swaps numbers and promises to keep in touch.

The encounter is far from isolated. The transformative TDP program was established in 1993 to identify and develop highly gifted African American and Latino students, groom them for acceptance to top music programs and prepare them for careers as classical musicians. The 10 musicians of the inaugural class were admitted based on teacher recommendations and auditions: the same criteria applies today for the 25 students admitted annually. All participants receive weekly private lessons with Atlanta Symphony members, funding for music camps, exposure to concerts and chamber music recitals at the Symphony and opportunities to perform live. When necessary, TDP even provides transportation to classes or gives stipends to help students purchase clothing for concerts.

The class of 2018 includes three tuba payers, a trombonist, a clarinetist and a cellist. All six received at least one full tuition scholarship, and one got a full ride plus a stipend at Juilliard. “That particular story is heartwarming,” says TDP’s development director Toni Paz, “because when this musician’s family couldn’t afford the instruments needed for college auditions, an anonymous donor offered to match what the student could raise. That student wound up leaving a summer music program early to come home, find a job and work to contribute what he could to the effort.”

For all the resources and time poured into TDP by the ASO, its board, volunteers and the community, Zgonc confirms the truism that the gift of being a mentor — whether watching a young charge soar during a command performance for President Barack Obama in the Oval Office, or locally, during any of the yearly Spring Recitals — is a two-way street. “It’s hard to sum up in just a few words what Azira Hill has done for us, but I think changing the course of history is probably a good start,” says ASO executive director Jennifer Barlament. “The fact that she’s one of only six life directors at the Symphony [since its inception in 1939] is not only an expression of gratitude for the tremendous impact she’s had on the institution, but an expression of how important TDP is to us. If it weren’t for her steely determination, which I’m sure you picked up on after five minutes of talking to her, even at age 90-something, that program wouldn’t have come into being in the first place. And I’m sure it would have faltered at some point in the past because it’s a huge commitment.” Hill cultivated her steely determination growing up in Holguin, Cuba, as one of only two girls in a large, close-knit family of nine siblings. She was seventh in birth order, and not as naturally outspoken as her brothers and sister. “I was introverted, but [having] a bunch of boys always telling me what to do, and a busy mother, I learned to speak up for myself and grow,” she says.

Life was happy, she says, and the children grew up surrounded by music. Most played at least one instrument, if not two or three. The house in Havana was the site of Sunday afternoon rehearsals and concerts every week. They were exposed to the works of Latin America’s most important writers, poets and composers and were expected to become fluent in the classical canon. There was no TV, and the radio was only turned on when baseball games were being broadcast. The steady drumbeat of her mother’s wisdom and encouragement rounded out Hill’s primary education.

“My mother was a great influence,” she says. “She taught me that there was nothing impossible . . . that I could do and achieve anything I put my mind to. ‘You’re pretty,’ she’d say, ‘but you’re not just occupying space here. You are here for a purpose and you must find your purpose.’”

Hill found her purpose after migrating to the States at the age of 15, alone, to attend high school. Following graduation, she enrolled at Bethune Cookman College, before transferring to nursing school at Grady Hospital. While attending church on her first Sunday in Atlanta in 1955, she met the man she would eventually marry, Jesse Hill. “If I’d stayed home, I never would have gotten married because my brothers didn’t let anybody near me,” she jokes. But her face drops when recalling the injustice of being forced to live under Georgia’s segregationist rule of law. Azira Hill was 15 years old when she arrived in a segregated Atlanta. She describes those times as lonely and difficult. (Image courtesy Azira Hill)

“My early days in Atlanta were difficult and lonely,” she says. “I could not believe I would have to live the rest of my life like this. I cried a lot, worked at Grady for a short period, started my family and became involved in the Civil Rights Movement through Jesse, an actuary at the Atlanta Life Insurance Company who went on to serve as president and CEO. He was the first African American chairman of the Atlanta Chamber of Commerce and a founding director of MARTA, who encouraged me to get engaged.”

After becoming a US citizen in 1960, Hill felt it was her responsibility to make things better. She served on boards at the Martin Luther King Jr. Center, St. Joseph’s Mercy Care, Center for Puppetry Arts and Southeastern Flower Show. Her lifelong love of music led her to volunteering at the ASO, where she co-chaired the Atlanta Symphony Associates’ (ASA) Action Committee for Audience Development in the Black Community with Mary Gramling under the leadership of ASA President Marcy McTier. Members of the Action Committee, which included leaders from Atlanta’s business, education and arts communities, were unified in their belief: it was imperative to make the ASO and its programs more representative of the diverse metro Atlanta community.

Initially, they experienced pushback. “When we asked why there was so little participation among children of color in the Youth Symphony Orchestra, we were told, ‘Most blacks don’t know how to audition,’” says Hill. Undaunted, she followed up with a logical question: Why not teach them?

“There were so many changes going on, and we thought the Symphony should change, as well,” says Hill. “Yoel Levi was the conductor at the time . . . and it took us three years to convince the orchestra to change with the times.”

Like-minded patrons campaigned to diversify the Symphony, kick-start the annual King Celebration in collaboration with the glee clubs of Morehouse and Spelman colleges and invite guest artists to harmonize with the ASO’s 225-voice All-Atlanta Chorus for its Gospel Christmas special concerts.

Convincing musicians to forfeit free time to mentor students, however, was another challenge. When ASO members asked why they should have to do something no other orchestras were required to do, Hill replied, “Because this is Atlanta, and Atlanta is different. It is the right thing to do.” Baby steps led to full commitment. Just five years after the mentorship component of TDP was formalized, one of the musicians, Ralph Jones, a principal bass player, collected money for his mentee to attend a summer conservatory camp. When the child’s life changed as a result of the six weeks of intensive, concentrated study, the ASO established the Azira G. Hill Scholarship Fund to provide financial assistance to allow students to attend prestigious national summer music programs.

Angelica Hairston, a professional harpist and former TDP scholarship recipient, says the exposure was life altering for her. “I really believe the instrument chooses the musician, and the harp chose me,” she says. But it wasn’t until she attended Boston University’s Tanglewood Institute one summer that she understood how an avocation could also be her vocation. “I had a chance to work with Ann Hobson Pilot [former principal harpist of the Boston Symphony Orchestra and the Boston Pops],” says Hairston. “She was the first African American woman to hold a principal position in a major symphony in the US. It was a visual I’d never experienced before. She understood my experience and was sitting in a place where I could, potentially, see myself. I still get goosebumps when I think about it. Had it not been for that experience, I really would not have been able to see myself having a viable career in the arts.” Though Hairston does not play in an orchestra full-time, she says the skills imparted at TDP still serve her as artistic director of the Urban Youth Harp Ensemble at East Lake and as the founder of Challenge the Stats, an initiative to create diversity in the performing arts. “I learned how to speak before performing a piece of music, connect with an audience, write critical essays about the music I was hearing, was taught the value of showing up on time, and how to advocate for myself.” She says the tradition of passing those lessons on to her 86 harp students at the Drew Charter School has been an honor.

Barlament calls the cycle that Hill initiated of musicians like Hairston paying it forward a “holy obligation.” “Most musicians grew up in a system where they wouldn’t be where they are if not for some individual, generally a music teacher, who took them under their wing and showed them the glory and the challenges of playing an instrument and becoming a classical musician at a really high level. If it weren’t for TDP, a lot of our graduates wouldn’t have had the opportunity to know what it takes.”

For TDP alum and founder of the program Play On, Philly!, Stanford Thompson, his introduction to Christoper Martin, the ASO’s principal trumpet player, was a game-changer. “Chris was one of the most important teachers in my life,” says Thompson. “He was someone who, every single week that I saw him, was encouraging. He taught me how to work really hard and persevere, how to check my ego, take rejection and listen. He believed in me more than I believed in myself. And he did that consistently for five years.”

Thompson eventually realized his dream of performing at Carnegie Hall and playing under the baton of some of the greatest maestros conducting internationally, yet he says there is nothing more gratifying than helping children reach their highest potential.

“Everybody who goes through TDP ends up with a deep sense of responsibility to give back, donate money, teach workshops and master classes and give advice to younger students,” he says. “I hope Mrs. Hill realizes that the hundreds of kids we touch in Philadelphia alone are the beneficiaries of her positive example, and that none of us would be where we are if it was not for her.”

Tickets for the Talent Development Program Spring Recital this Saturday and Sunday, April 14 and 15, are free, but must be reserved in advance at atlantasymphony.org or at the Woodruff Arts Center box office.