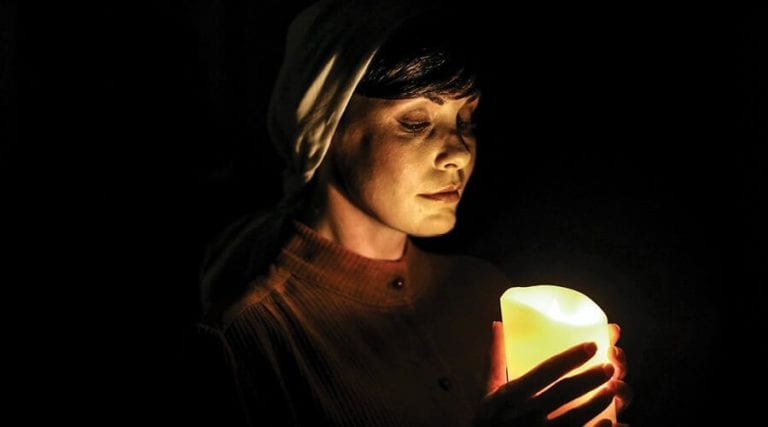 “Out of Darkness” is a brilliant, haunting watershed for the Atlanta Opera

The bold Atlanta Opera world premiere of Out of Darkness: Two Remain debuted Thursday. The story of two Holocaust survivors — one Jewish and one gay — is told with powerful theatrical strokes. ArtsATL managing editor Scott Freeman and theater critic Jim Farmer both saw the performance and agree that the production represents a high-water mark for Atlanta Opera. They share their thoughts on the opera, which continues Thursday night and runs through Sunday at the Balzer Theater at Herren’s.

Scott Freeman: Jim, you sat directly behind me on opening night of Out of Darkness, and we both seemed to have similar reactions. We were actually both pretty speechless afterwards. This production is not always easy to watch; it is deeply emotional and deeply moving. It lingers with you long after the performance. And for me, those are hallmarks of great art. I have to give strong props to Tomer Zvulun, the Atlanta Opera’s artistic director, for staging a production as impactful and provocative as this, and also for the care he brought to it in his direction. This is a vastly different Atlanta Opera under his charge, and I love his sense of daring. Now that you’ve had a few days to reflect, what did you think overall?

Jim Farmer: I was tremendously impressed. This show has been workshopped, but the Atlanta staging is the world premiere. It’s a bold piece of work from Jake Heggie and Gene Scheer, and one that feels really alive. One of Zvulun’s great gifts is how theatrical his works are. Both segments here are haunting and impeccably staged and performed. This is a major achievement for the Atlanta Opera.

Freeman: I completely agree, Jim. The setup is deceptively simple. Both acts are focused on Auschwitz-Birkenau during the Holocaust, and are true stories. Act One is about Krystyna Zywulska, a Jewish woman who cloaked her identity and was imprisoned as a political prisoner and survived. Act Two shifts to the story of Gad Beck, who survived the Holocaust while his first true love, poet Manfred Lewin, didn’t. The simplicity of that premise allows for a deeper story to be told, and for the audience to really connect with the main characters. I thought the location, the intimate Balzer Theatre at Herren’s — home to the Theatrical Outfit — really added to the experience.

Farmer: You’re so right, Scott. The two pieces are detailed but not overly complicated. They both work well on their own but also beautifully complement each other. And you nailed one of the show’s major assets. The Balzer is a perfect home for this. I think in a bigger venue it would not have been as successful, but in this intimate setting, the audience is literally right there in the action. At times some of the performers are in the aisles, which gives this such an atmospheric feel. It’s a production that’s hard to shake.

I was impressed by the entire cast, including Maria Kanyova as the older Krystyna — sharing her sad story — and the younger version, played by Bryn Holdsworth. Ben Edquist is the ghost of Manfred, and he’s an electrifying presence. The most pleasant surprise for me was Tom Key as Gad. I’ve watched Key onstage for a long time; this is not the kind of role I’ve seen him play before, and he flings himself into it. It’s a passionate, heartfelt performance. He only sings at the end but conveys an incredible amount of emotion, of loss and longing.

Freeman: Tom Key was probably the least surprising part for me. He’s one of the icons of the Atlanta stage, and deservedly so. But that’s also my lone criticism of the show. He’s a professional actor and most of the other key players are opera singers; there were a couple of moments of a bit of disconnect because Key was acting and the others weren’t always capable of going there with him. But he made his character so easy to empathize with. I could feel Gad’s deeply rooted, unresolved anguish on a deep level — especially that moment when he talks about what life was like for him after he was released. I was also moved by Maria Kanyova in the other lead role, and by the understated performance of Ben Edquist. Jim, was there a scene that especially stood out for you?

Farmer: Yes, Tom Key is definitely an icon. I don’t know that any one scene stood out for me. There are such vivid moments throughout, such as the interactions between the young women in the concentration camps in Act I and then the wonderfully seedy world of Berlin created in Act II as Gad and Manfred fall in love. I must say, the song “A Hundred Thousand Stars,” which deals with the large number of LGBT people killed as part of the Holocaust, hit me pretty hard. Something else that impressed me was how much of a collaborative effort this seemed among disciplines and Atlanta-area talent. What did you think of the melding of so much local artists?

Freeman: I thought it was a brilliant move. Zvulun brought in former Atlanta Ballet artistic director John McFall to choreograph the four Atlanta professional dancers he used: Miriam Golomb, Nicole Johnson, Brandon Nguyen and Joshua Rockliffe. They didn’t do traditional dance, but they did bring very precise movement to the production that was evocative and often haunting. They added atmosphere and depth to the production, and all four took nonessential roles and made them essential. And I must applaud the smart — and again, simple — set designed by Christopher S. Dills, along with the performance of the six-piece orchestra, who always complemented without intruding.

What was it that stayed with you after this performance? I was certainly struck by the survivor’s remorse shown by both lead characters: why did I survive when my friends didn’t? It also hit me on a personal level; my father was a paratrooper who helped liberate one of the women’s prisons at Dachau at the end of the war. He gave me a sense of what that was like for him when they broke through the back gate, but this production really drove home the tragic insanity of what happened in those camps. And I don’t think I’ll ever forget the image of what I thought at first were falling snowflakes.

Farmer: Those snowflakes were amazing. For me, it felt like a production that came together on so many levels, from the technical aspects (what a moody, efficient set!) to the choreography to the acting to the wonderful music and libretto by Heggie and Scheer, who are frequent collaborators. You asked what stayed with me after the performance. I will say, it’s such a personal work. I will readily admit that I am not someone who has been attending opera all my life. I wrote an article about Zvulun a few years back and caught his Romeo and Juliet in 2016. I’ve been a huge fan ever since, relishing the company’s takes on Silent Night, Turandot and The Flying Dutchman. This is an opera that is completely different in feel and scope from all those, told in a succinct fashion, but one that’s just as unique and powerful. The work Zvulun is doing is world-class. I am thrilled at the sheer theatricality and energy he brings to his projects.

Freeman: I’m also impressed with what he is doing with the company. Before he came, it was in financial trouble and seemed creatively moribund. This company now seems transformed. And to be premiering something like this? That’s impressive. Part of Zvulun’s vision is to introduce opera to people who have never been fans of opera, to make it more accessible and inviting. I’m one of those people. And a production this good makes me eager to see what’s coming next.

Freeman: There was a talkback after the show, and someone asked that very question. It’s difficult to imagine it being staged at the Cobb Energy Centre. The Balzer seats 200, and I could envision it translating reasonably well to a 500-seat house. But I agree with what you said earlier: the intimacy the audience had with the performers was such a strong part of the experience. Any final thoughts, Jim?

Farmer: This was fun, Scott. Maybe our paths will cross at the Atlanta Opera’s upcoming version of Carmen later this month. And hats off to this entire creative team for such a courageous work.