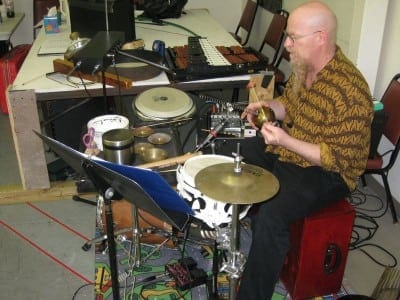 If you go to shows at Eyedrum or to theater around town, you’ve probably seen Klimchak. He’s an Atlanta composer spotted in a crowd by his foot-long reddish goatee, bald head and groovy shirts. Musically, he’s best identified by a certain Asiatic aesthetic — the same impulse that levitated Debussy’s harmonies and eliminated the flow of time à la Satie and found strength in Cage-style attraction to unfamiliar sounds, whether by randomness, improvisation or “discovered” instruments.

Klimchak wrote incidental music to Georgia Shakespeare’s “A Midsummer Night’s Dream,” with sound effects and scene-change music played by the actors themselves. (Read Wendell Brock’s and Steve Murray’s reviews of that show.) Klimchak didn’t appear in the production for budget reasons — in addition to a composer’s fee, he’d get a performer fee — according to Georgia Shakespeare Producing Artistic Director Richard Garner. (“I actually work cheap,” the composer-performer confides.)
But on Thursday night, in costume and on stage, Klimchak will premiere his music for the company’s bloody “Titus Andronicus,” one of Shakespeare’s earliest plays and likely his first “revenge tragedy,” a crude form that appeals to the mob (in 1592 and 2009) and which he later made subtle and psychological in “Hamlet.” I wrote a short profile of Klimchak for Sunday’s AJC.

In performance, accompanying a play in the theater, Klimchak’s music serves many functions. It can be almost subconscious — akin to expert lighting design in helping to create a mood and succeeding if unnoticed — or it can define a scene before the actors appear on stage, such as the unmistakable sounds of timeless ritual or martial brutality. And he achieves this in novel ways, never resorting to movie clichés. Most often, though, his music forms in a pool of lovely or jarring or weird timbres — at play with the color of sound. To hear and see for yourself, visit Kimchak’s MySpace page.

I snapped the above picture at a “Titus Andronicus” rehearsal a couple of weeks ago. The cast would act through a scene, with Garner offering running commentary and direction and Klimchak improvising all the way, trying to match the music to text to its underlying emotion and motivation. In pre-rehearsal conversations, Garner and Klimchak decided to dwell in “ritualized sounds where you couldn’t tell what culture they were from,” the composer told me, “so I figured a lot of sustaining instruments would get us there.” In the picture he’s holding an instrument he invented for this production of “Titus,” a Golden Apple, he calls it, which is a brass bowl with a steel spring bolted onto it. He strums it with a wooden stick, and the sound is, as expected, unique.