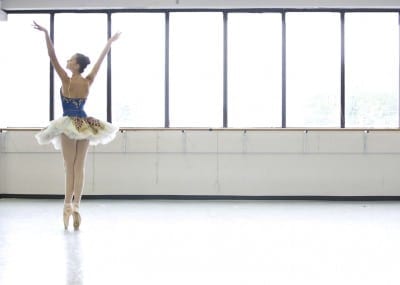 In a large ballet studio in Midtown, a piano pounds out an insistent waltz at a slower-than-comfortable tempo. With pointe shoes on bare feet, about 30 young dancers repeatedly spring into the air with legs interlacing. They nail multiple turns and leap with legs scissoring. They repeat the phrase — higher, stronger — each time adding clarity and finesse. They’re trained to dance full-out in a crowded space without colliding and to stay focused without showing signs of fatigue, even when exhausted or in pain. Wish I could bottle that motivation, desire and commitment — as palpable as the room’s warm, sweaty air — and give it to every teenager.

These professional-level students are in the Atlanta Ballet Centre for Dance Education’s Summer Intensive program, ages 16-23, and they hope to land coveted jobs with professional ballet companies in the next few years. It won’t be easy. Of the 30 or so — chosen by audition and representing 17 states and Canada — Atlanta Ballet’s artistic staff will invite a few to join the company’s fellowship program, the first step toward joining the company.

On July 30, this group will reveal their talents in a performance of ballet, modern dance and jazz works in a free show at Kennesaw State University’s Stillwell Theater at 4 p.m.

Observing the class is master teacher Gretchen Ward Warren, who wrote the book on teaching classical ballet technique — literally — with her 1989 “Classical Ballet Technique.” This summer, she’s staging variations from Michel Fokine’s “Les Sylphides” for the upcoming show. A professor at the University of South Florida, Warren stepped out of the studio recently to talk about the special talents required to dance Fokine’s masterwork.

Warren says she first met Atlanta Ballet artistic director John McFall in 1982 when he created a ballet on American Ballet Theatre II. As the junior company’s ballet mistress at the time, Warren helped recruit young dancers from across the country. Casting “Les Sylphides” again calls on her eye for talent.

Unlike the late 19th-century classical ballets, “Les Sylphides” has no story line, but evokes a mood of poetic reverie. Dancers must transcend what’s purely technical and dance intuitively to Chopin’s music. The ballet’s ethereal, buoyant style hearkens back to early 19th-century romantic ballets. (Third picture: Cortney Funk.) Warren describes the special gifts dancers must bring to Fokine’s choreography. Beyond a natural sense of coordination, flow, and musicality, Warren says, “they have to have a unique quality about them that draws your attention, that makes you interested to learn more about who they are as a person and artist when you watch them dance.”

Warren sought dancers who had not only technical mastery, but “who, when they danced, looked like they were completely self-involved.” In “Les Sylphides,” Warren continues, “you’re not performing for the audience. You’re so caught up in the poetry of the music — it’s just about you and the music.”

“That’s the ultimate area of talent — to draw us in,” Warren says softly, “because you are so personally invested in what you’re doing, that we’re fascinated watching you do it.” Warren adds that we’re drawn to beauty, but “not the beauty of a vacuous high fashion model. It’s an inner beauty that reveals itself when you’re dancing.”

Also on July 30, the group will show a wide span of talent in the premiere of Ivan Pulinkala’s contemporary ballet “Succubus”; the pas de deux from August Bournonville’s “Flower Festival,” staged by Paige Fulleton McFall (John’s wife); a jazz piece by Sharon Wong of the Alvin Ailey School; and new works by Christian Clark, Jarrod Kentrell and other guest faculty. Next season, a handful of these young hopefuls will reveal their talents with Atlanta Ballet on the Cobb Energy Centre and Fox Theatre stages. I wonder, which ones?