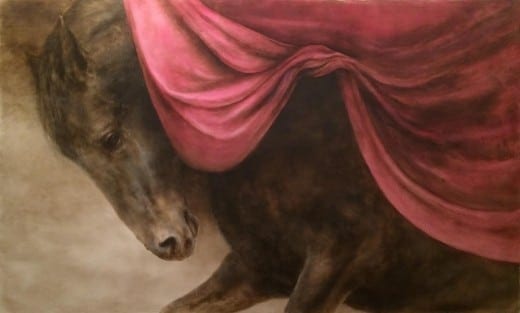 Departing slightly from her Named for . . . series, in which animals become surrogates for underappreciated historical social activists, this group of paintings pays tribute to inspirations that have guided her throughout her career. One is the legacy of Charles Willson Peale, the colonial Philadelphia painter, naturalist and founder of the Pennsylvania Academy of Art, which Javens attended. The other, the animals themselves. “Great and courageous” creatures show up in her sleep, she says, surprised and grateful each time they appear. The Turtle, for example, came to her in a “mossy dream” (hence the greenish color of the drapery) and was “very nimble and could hop like a rabbit.”

Javens’ painstaking and exquisite rendering of each animal conveys their noble character and her deep respect. It harks back to Peale’s belief that physiognomy, the widely practiced art of discerning a person’s character from his facial characteristics, could also be applied to animals. Javens similarly identifies admirable human qualities and behaviors in her paintings. In No. 3, for the Rev (2015), the only painting in this group identified with a specific individual, a soft lamb contentedly curls up next to gray drapery in the right foreground. Like the Reverend Linnette C. Williamson, an African American woman who established parks and desperately needed social services to assist struggling communities in Harlem, the lamb reveals inner strength and resolve, despite its sweet and gentle nature.

As before, each painting is a meticulously rendered animal centered before a neutral background. However, these creatures emerge from behind thick drapery as if onstage. A direct reference to the deep scarlet curtain that divides the space in Peale’s 1822 self-portrait, The Artist in His Museum, it is her tribute to the man who founded and curated the first natural history museum in the United States in the Peale Museum.

Though theatrical, the pompous grandeur often associated with velvet-curtained, old-fashioned theaters is counterbalanced by the paintings’ presentation. The large paintings, on unstretched canvases, are tacked directly to the wall, and cropping the animals’ limbs convey a snapshot immediacy that makes them accessible, despite the formality of their stagelike presentation. As the ordering of natural specimens in museum cases transforms them into didactic models, the re-presentation of natural objects and artifacts with simple modifications in Christian Bradley West’s Alchemy transforms Wood’s project room into a cabinet of curiosities.

His interest in alchemy is both spiritual and metaphorical, rooted in his genuine belief in the evolutionary potential of human society, and realized in his skillful and sometimes surprising transformation of natural and man-made items into objets d’art.

At first the room seems like a haphazard accumulation of the found objects and photos the Atlanta artist has long collected. Tree branches, tiny old photographs, bones and other natural remains are placed on shelves, window sills, in a rustic vitrine or unceremoniously stuck to the walls.

A closer look reveals that the photos stuck to the wall or collected in a vintage cigar box are actually deftly rendered graphite, paint and ink replicas of found photos. Hunter and Grandson (2015) shows a man wearing loose trousers and suspenders leaning against the tail of a 1950s car, holding heads of deer he presumably shot held by the antlers. The faint figure of a young child can barely be seen peering at the spectator over the man’s right shoulder. West has skillfully replicated the grimy smudges and fading that frequently obscure the subjects of old photographs and lead to ambiguous, and possibly troubling readings: Is the young child standing on top of the car? Where is the hunter’s gun?

Across the room another tiny photo-replica, The Magic Hatchet (2015), is stuck to the wall between an antique hatchet and an antique axe. Their metal heads have been painted with gold leaf, transforming the old tools into precious, aesthetic objects.

The piece in the center, The Magic Hatchet, presents the startling image of a young man about to behead or dismember a limp young woman held across his knee. Despite the tiny gold dots that sparkle around the blade in West’s re-presentation, the magic of this trio seems dark and disturbing.

West makes reference to earth, air, water and fire, the four alchemical elements. A shelving unit holds gilded antlers, a tree branch with porcelain blooms and Rainshower (2015), a three-inch-square graphite, acrylic and ink drawing. In the corner stands Memento Mori #1 (2015), a log charred in a Japanese Anagama kiln, on which a pristine cast porcelain bird perches.

Medieval alchemists believed that gold was the most evolved of the metals. West uses gold leaf to signify the parallel notion that individuals can better themselves and reach their maximum potential.

His tiny photo-replica Letting Go (2015), which shows a young man releasing magical gold bubbles into the air, is a hopeful foil to his disquieting drawings.