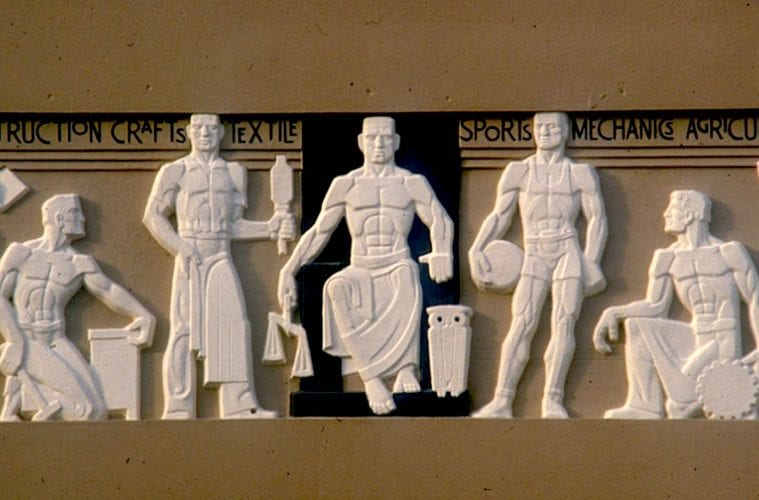 Julian Hoke Harris’ works stand, or fall, as monuments to another era’s ideals

About seven miles from Reidsville, in southeast Georgia, stands the Georgia State Prison, an imposing edifice that has housed some of the most dangerous criminals in the state’s history. Built in part with federal Public Works Administration funds between 1934 and 1936, it opened in 1937 with modern penological aspirations of vocational rehabilitation of inmates, intending to replace the state’s infamous and nationally criticized prisoner camps. It became the first prison to become accredited by the American Correctional Association for Adult Correctional Facilities.

Designed by Atlanta architects Tucker & Howell in a monumental but reductive “stripped classical” modern style familiar to so much Depression-era government architecture, it is similar in feel to Atlanta’s Federal Post Office Annex completed five years earlier (now known as the Martin Luther King, Jr. Federal Building on Forsyth Street). Nevertheless, the formidable structure that is Georgia State Prison bears above its main entrance a work of art that expresses that era’s ideal of restoring inmates to society as productive, useful members through work.

Entitled Rehabilitation, the frieze depicts a seated male allegory of Justice, flanked by six male figures depicting various vocations. The sculpture was created by an artist who had returned to Atlanta and opened his freelance artist studio not long before construction on the prison commenced, and after just a year in the city was sculpting full-time. He quickly became in demand for public and institutional sculpture and architectural art, and he was one of the most prolific creators of public art in Georgia, even if today many people who might be familiar with his art don’t recognize his name: Julian Hoke Harris.

Harris was born in Carrollton, Georgia, in 1906. He graduated from Georgia Polytechnic University, now Georgia Institute of Technology, in 1928 with a B.S. in architecture. Two years later, Harris moved to Philadelphia to study sculpture at the Pennsylvania Academy of the Fine Arts, returning to Atlanta after graduating. He became licensed by the State of Georgia as an architect, which enhanced his value as a creator of architectural sculpture. In 1936, Harris began teaching architecture at Georgia Tech and continued to teach there for another 36 years, all the while pursuing his work as an artist. He remained based in Atlanta until his death in 1987.

Harris’ works for the Georgia Tech campus include the bronze gate of the Naval Armory, the stained glass window in the institute’s Gothic-style Brittain Dining Hall, along with 10 stylized busts of famous engineers and scientists that leer out from the hall’s stonework like architectural grotesques. In the course of his career, Harris created architectural sculpture for over 50 buildings, including Animal Husbandry and Farming (1954) for the Georgia Department of Agriculture building and, guarding the entrance to Grady Memorial Hospital, Hygeia and Hippocrates representing the medical profession. Harris also produced more than 20 medallion designs  including the official inaugural medal for President Jimmy Carter, a commemorative medallion for the Centennial of Atlanta Public Schools and a United States Bicentennial medal representing the State of Georgia. The works readers are most likely to see firsthand, however, are those that can be viewed from Atlanta’s city streets.

Across the street from Grady Memorial Hospital, at 99 Jesse Hill, Jr. Drive, stands a building that housed the Fulton County Department of Health and Wellness for nearly six decades. The building was vacated in April of last year. A pair of unique cast aluminum bas-relief sculptures by Harris have adorned the face of the building since 1959. On the left end is Keeping Away Death, depicting a male human avatar of health holding off the skeletal grim reaper, and Keeping Away Old Age, a female human allegory for hygiene and medicine fending away Father Time bearing an hourglass and a mask of tragedy.

Although earlier plans were for the building to be renovated, county leaders instead sold it to Grady Health Systems. It is now on track for demolition. Rather than embedded in the wall, these reliefs are mounted on it, hanging several inches in front, so could be removed with relative ease. At this juncture, their fate is uncertain, though Harris’ design for Keeping Away Death has been emulated in uses elsewhere, from medical business logos to tattoos. It would be a shame for the originals to be destroyed or otherwise lost. 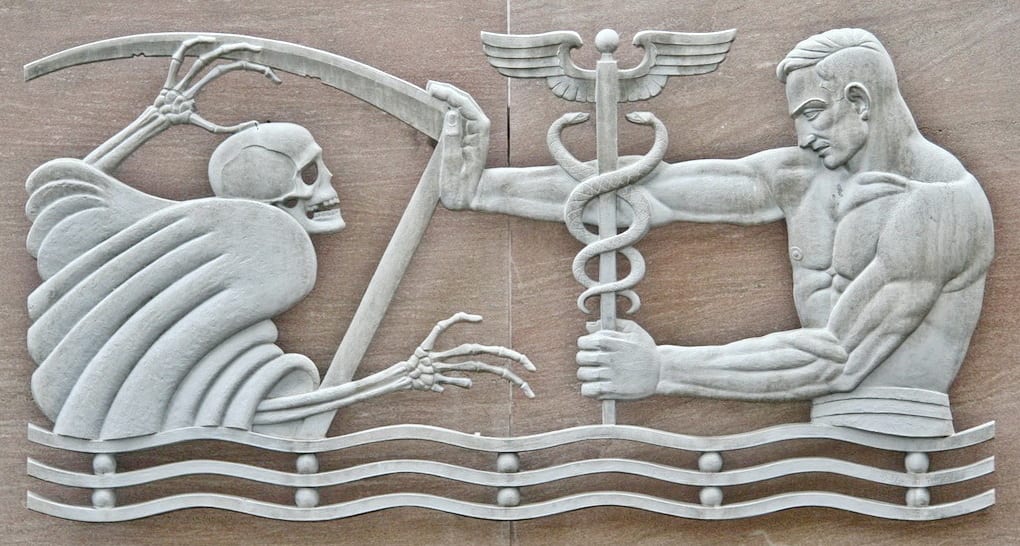 Last year, Curbed Atlanta reported that demolition of a mid-century building at Grady Memorial Hospital had uncovered an intricate Harris relief sculpture hidden for decades within hospital walls, created for Grady when it was built. It was entitled New South, a term coined by Henry Grady in the late 19th century. The report suggested Grady will retain the work “as a focal point for a new entryway garden.” The new Marcus Trauma Center now covers up the place where the sculpture had been. A companion piece, Old South, appears to have not met such a happy fate. A large broken chunk of its remains was spotted last year by architectural history aficionado Terry E. Kearns (who contributed some photography for this article), discarded by unknown parties on a street corner beside a parking lot. 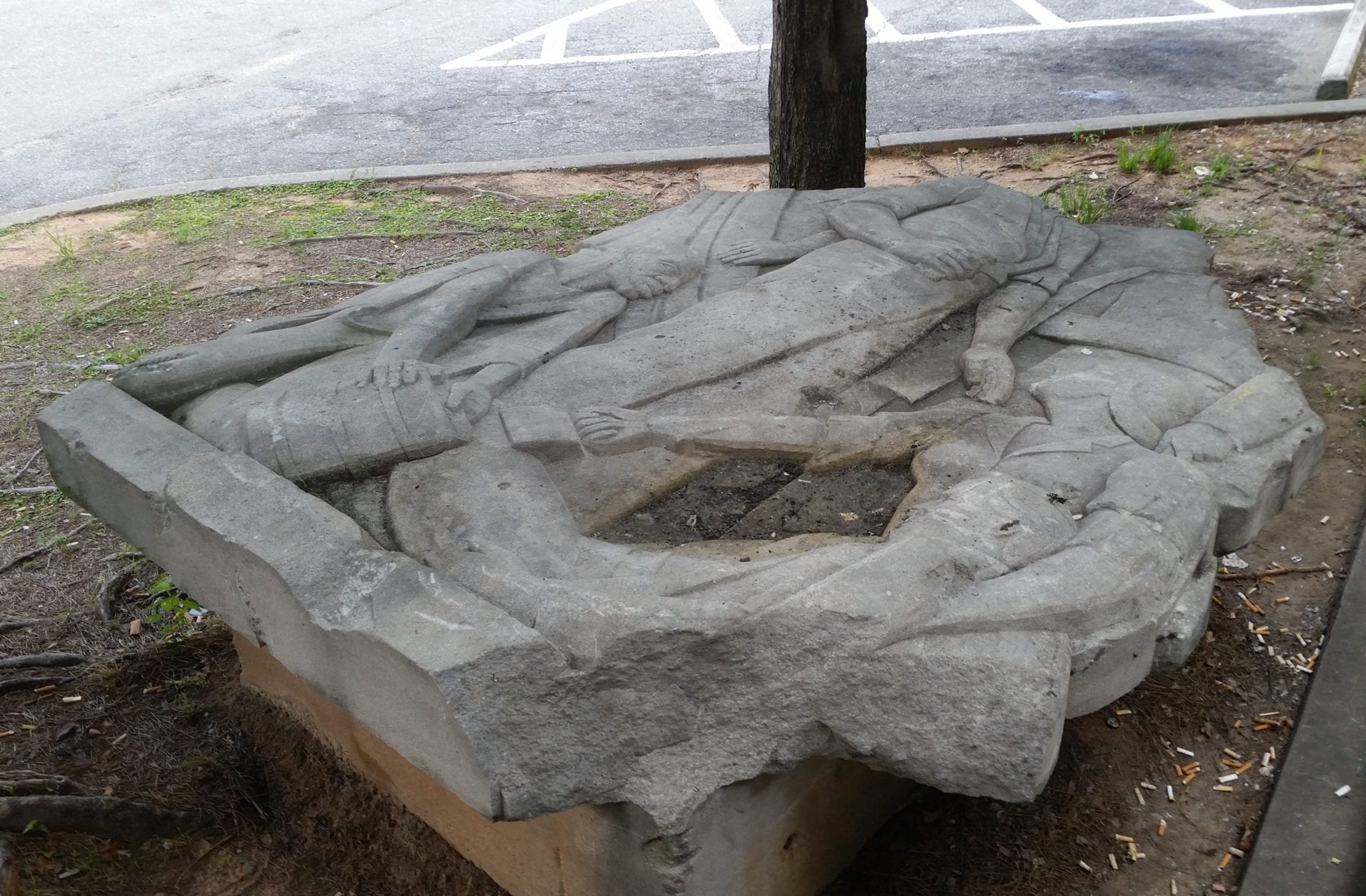 That loss begs the question of who owns “public art” and whether that art is indeed “public” or only “publicly viewable.” Who bears the rights or responsibilities for that art’s preservation, location, viewability or even destruction? How much are “public” artworks a resource held in the public trust, regardless of private property ownership? Does it matter, and will we miss them?

The questions also apply to another pair of architectural sculptural reliefs. At the far end of Zoo Atlanta is the World of Reptiles building. Until the Zoo’s Scaly Slimy Spectacular exhibit opened nearby in 2015, the World of Reptiles was the oldest building in the Zoo grounds still used for public exhibits. Designed in the late 1950s and opened in 1962, on either side of its entrance are bas-relief sculptures in which Harris depicted both mythological and cultural relationships between humans and reptiles. They were originally bare stone, but alas, in the interim, someone decided to paint them, a regrettable “improvement” that was in no way the artist’s intent.

Sometimes, however, works of “public art” are so embedded in our collective subconscious that they can go unseen, even when in plain sight. Take the case of another pair of Harris reliefs on the court square in downtown Decatur carved into the cut limestone blocks on what was once First National Bank of Decatur, which opened in 1951. A renovation by F.P. Smith, a colleague of Harris at Georgia Tech, of a building built in 1925, the bank is itself long gone. Today the building houses a Starbucks on the corner and the Little Shop of Stories at the main entrance. On either side of that wide entryway, above the building’s Dakota Mahogany granite base, are reliefs carved in limestone that are at once influenced by a “sunken relief” style drawn from ancient Egypt and evocative of Depression-era social art of the Works Progress Administration.

The panel on the left depicts workers representing industry and agriculture, a large figure surrounded by smaller ones representing farming and diverse trades. The one on the right symbolizes aspects of education and culture, with a young scholar in academic robe and mortarboard, encircled by a handful of figures representing religion, law, philosophy, science and art. They are so readily accessible to pedestrians that one can closely examine Harris’ “sunken relief” technique by touch as well as eye.

Another important set of works by Harris, especially for children and fans of literary history, happen to be freestanding rather than reliefs, although they no longer reside in Atlanta. The Critters, three sculptures of five characters from the African American folk tales collected by Atlanta author Joel Chandler Harris (no relation to the sculptor) are currently located in front of the Morgan County Library in Madison, Georgia. 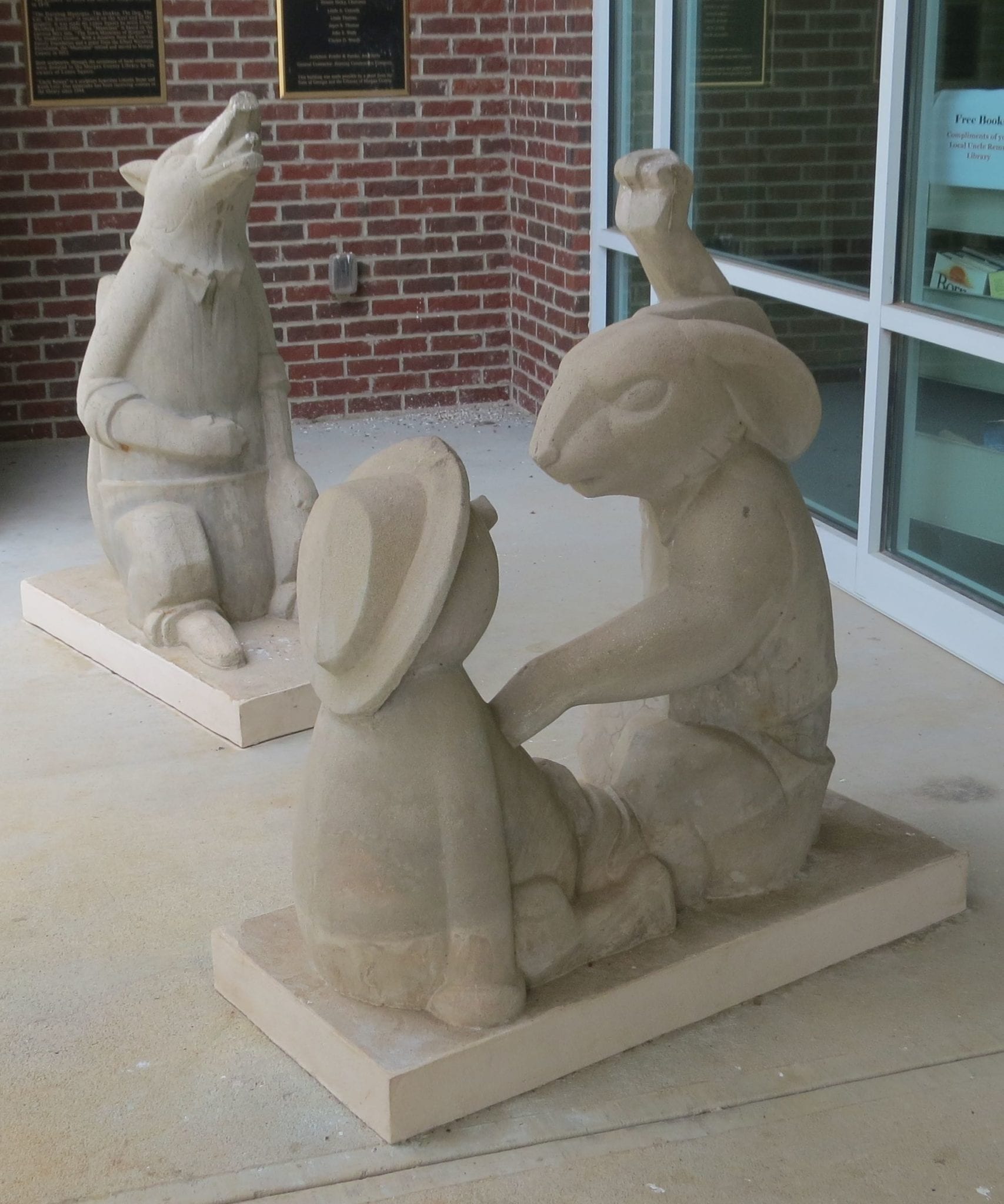 Originally created in 1959 for the then-new open-air Lenox Square shopping mall, The Critters triad respectively depicts Br’er Bear and Br’er Frog, Br’er Fox, and Br’er Rabbit fighting the Tar Baby. With subsequent upgrades of Lenox over the years, The Critters got moved to Madison, where they enjoy the guardianship of the library, part of the Uncle Remus Regional Library System.

For many older Atlantans who were children at the time these whimsical characters still called Lenox their home, The Critters remain Julian Harris’ best remembered sculptures, though their admirers may not have ever known the name of the artist who created them, nor his larger impact on public art both in Atlanta and around the state.