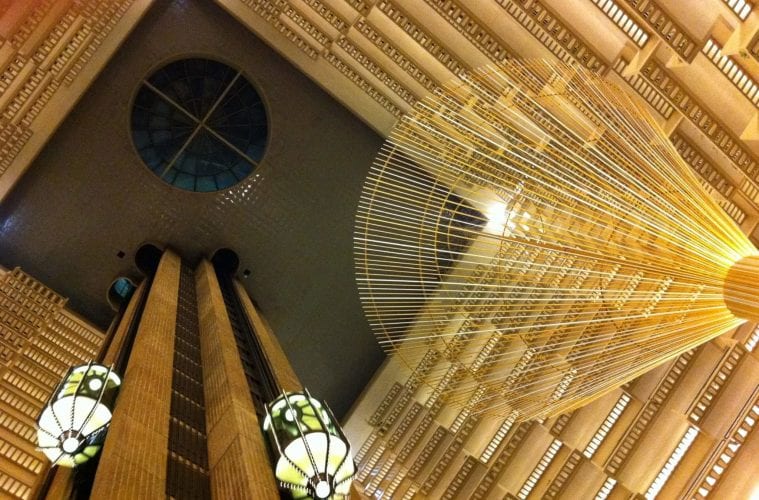 John Portman’s designs reshaped his hometown of Atlanta, and changed the world

On Friday afternoon, nearly 1,000 Atlantans — among them a “who’s who” of politicians, CEOs and cultural leaders — came together in the atrium of the AmericasMart in downtown to remember the life of John Portman, Jr., FAIA.

Portman, the man who shaped downtown Atlanta, passed away December 29 at age 93, leaving a towering legacy behind. The soaring atrium could not have been a more fitting venue for the occasion; the light-filled volume was a favorite design feature in Portman’s buildings, including the neighboring Marriott Marquis and SunTrust Plaza Garden building — where the architecture firm he founded 65 years ago is based today.

Portman, who designed and developed the Peachtree Center complex — including the Hyatt Regency, Westin Peachtree Plaza, Marriott Marquis, AmericasMart and SunTrust Plaza — was not only an architect but a developer and artist as well. Through more than six decades of work, he redefined downtown, bringing new industry and density to an area few others invested in during the 1960s and 1970s.

The combined title of “designer and developer” was nearly unheard of, and incredibly controversial, when Portman began his career after graduating from Georgia Tech. While design-build is a common means of delivering a building today, and many development firms have design professionals in their offices, at that time, design was viewed as something that should be created independently from the development of a project. Portman didn’t follow convention. 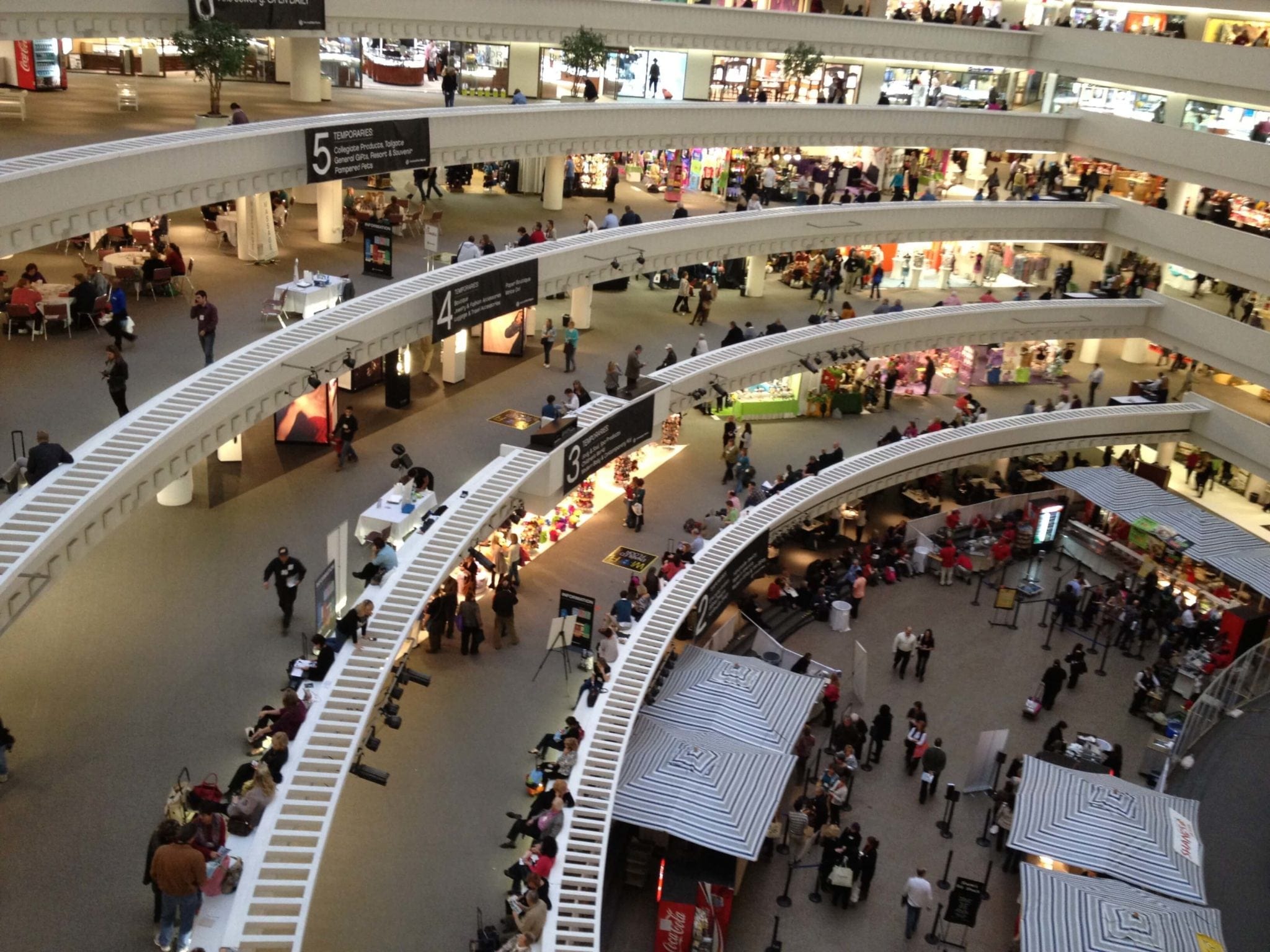 In 1957, Portman began his major influence on downtown when he founded AmericasMart; in the subsequent decades, he grew the trade mart into one of the largest of its kind in the world, covering four blocks and drawing tens-of-thousands of visitors to the city each year. Portman saw the Mart as a key economic engine for the burgeoning city, and its success caught the attention of city leaders. Building off his success, and the infusion of visitors to downtown, fueled by the Mart, Portman designed the Hyatt Regency — and in doing so, revolutionized hotel design.

While hoteliers were skeptical of the radical, soaring atrium, the hotel proved to be a major success, helping put Hyatt — and Atlanta — on the map. The design would go on to be replicated by Portman in locations across the country, eventually being picked up by other architects and imitated the world over. From there, Portman’s success grew. 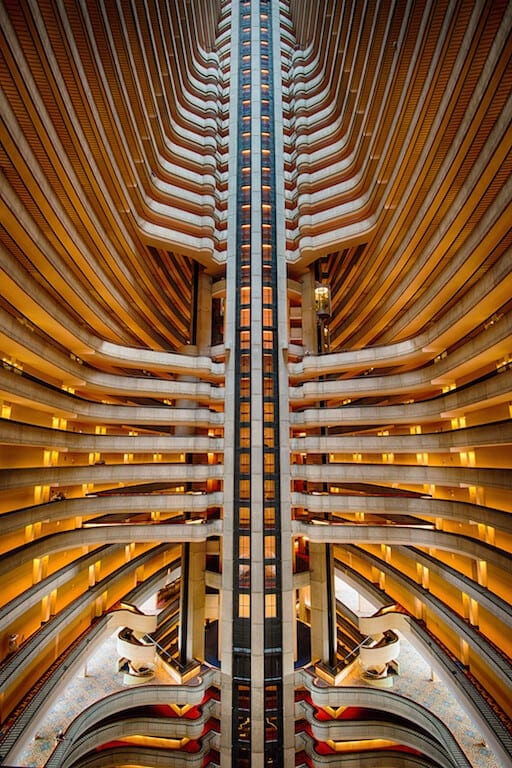 A new take on downtown

While downtowns across the country suffered from continued suburban flight and the rising dominance of the car — and the need to park those cars — Portman saw an opportunity for investment and renewal in Atlanta and afield. A year after the opening of the Hyatt Regency, construction began in San Francisco on Embarcadero Center, which would ultimately grow to encompass nearly 5 million square feet. Simultaneously, he began to build out the similarly sprawling, and borderline brutalist, Peachtree Center in downtown Atlanta; today his master-planned vision covers 14 blocks, connected by tunnels and skybridges.

Peachtree Center, Embarcadero Center and Detroit’s Renaissance Center all embodied Portman’s bold vision of large-scale, self-contained cities within cities. Portman focused on the human scale within, creating moments of compression and release into grand atriums. It’s a design technique he mimicked from one of his idols, Frank Lloyd Wright.

However, while the interior spaces were — and are — astounding, critics took issue with his insular, fortress-like designs, which turned blank walls to the street in favor of cloistered, curated experiences. While the professional reception was often critical, the spaces he created were popular with the public.

While his style may be controversial, the impact of his contributions to the city is indisputable. It’s no overstatement to say Portman shaped the physical form of downtown Atlanta more than any other single person. In a matter of a decade, Portman almost singlehandedly reshaped Peachtree Street and the Atlanta skyline.

By the late 1970s, Portman made a leap across the world, opening an office in Hong Kong at the end of the decade. Portman Holdings, in collaboration with AIG and Kajima, were the first western developers to work in China following its opening to the west. But the firm’s work wasn’t limited to China. 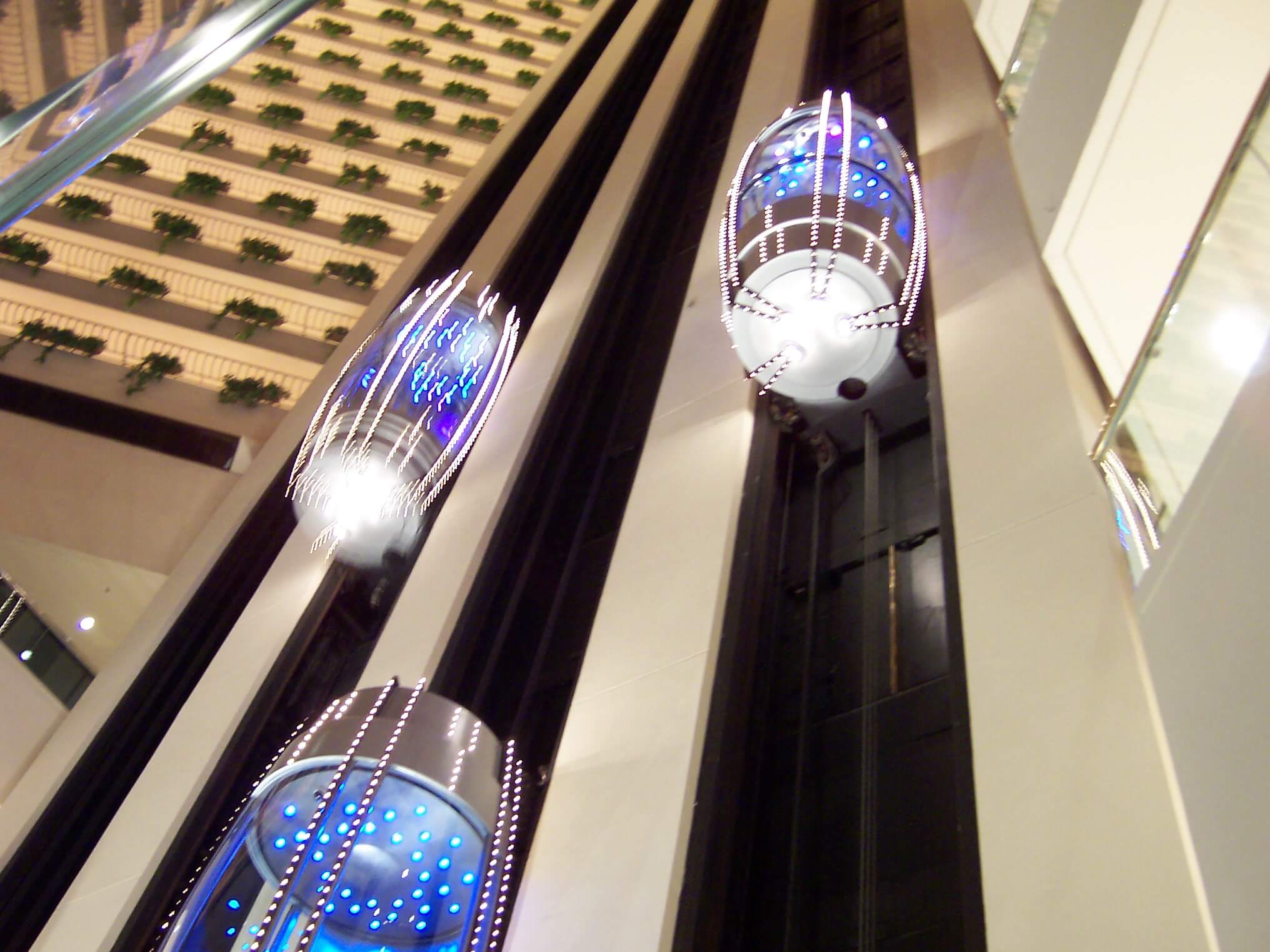 From South Korea to Singapore, Portman’s architecture and development firms worked to fuse nature and local culture through the design and construction of mixed-use developments, offices and hotels. During the 1990s, much of Portman’s time was spent designing and developing projects in Asia, though he always maintained his office in Atlanta. 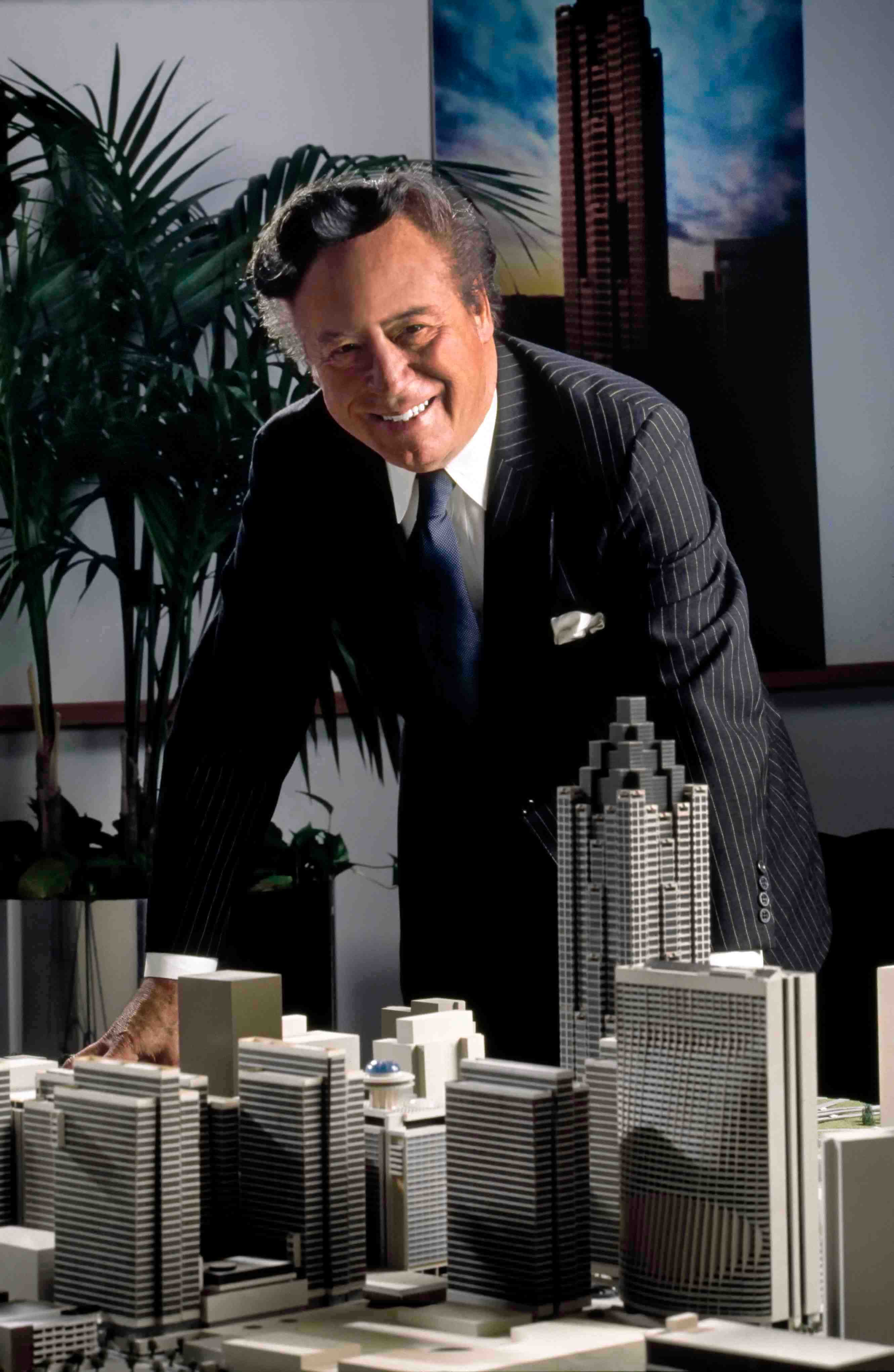 John Portman (1924–2017), shown here with a model of his signature project, Peachtree Center in Atlanta (Photo by Tom Hamilton/Courtesy JohnPortmanFilm.com)

Throughout the decades spent designing around the world, Portman stayed true to his roots. Atlanta is the city he loved, and Peachtree Center was, for him, a never-ending project. The last building Portman designed in his hometown was SunTrust Plaza Garden Offices, which opened in 1999, adjacent to Portman’s iconic SunTrust Plaza, which had opened in 1992. Today, his firm’s offices are housed in the building, which includes his signature light-filled atrium, complete with plantings to bring the outdoors in.

After a long hiatus, Portman’s firm has returned home, so to speak, with a new project under construction and two more planned. Coda is rising from a prominent site at Tech Square, while work is slated to soon begin on a new office building for Anthem on the adjacent block. Plans are also in the works for a new Intercontinental Hotel at the airport.

Fittingly, Portman was recognized last month by the Atlanta chapter of the American Institute of Architects (AIA) with a Presidential Citation for his work, which “energized the City of Atlanta with groundbreaking projects.” Though Portman is gone, there is no doubt his legacy will live on in Atlanta for generations. His built works provide a backdrop for everyday life in the city, and the architecture and development firms he founded will continue to shape the city as it grows. Also carrying on Portman’s legacy of design development will be his children, who include developer Jarel Portman of JPXWorks and Jack Portman, who serves as the vice chairman of both John Portman & Associates and Portman Holdings.