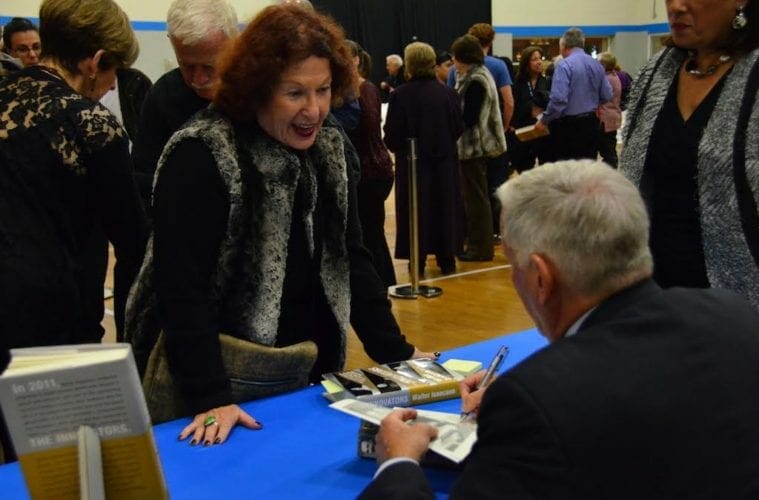 The book festival had humble beginnings with six authors over five days; it now has over 50 authors and lasts nearly three weeks.

These events happen before the festival officially begins October 30 with Henry Winkler and his coauthor Lin Oliver in conversation with CNN’s Holly Firfer about their latest children’s book, Alien Superstar.

What began over two decades ago with just six authors over five days of programming has since bloomed into one of Atlanta’s preeminent literary events, hosting roughly 50 authors and nearly three weeks’ worth of readings, discussions and more. The subjects of the books are as diverse as the authors themselves, an intentional programming decision, says book festival director Pam Morton, as they seek to serve “the largest population possible.” The size of the author lineup and the crowds coming to events has increased since the festival was founded.

Some of this year’s authors and guests include Adam Rippon, national figure skating champion and author of the memoir Beautiful on the Outside; and Preet Bharara, former federal prosecutor and author of Doing Justice: A Prosecutor’s Thoughts on Crime, Punishment, and the Rule of Law. Heather Morris, author of the bestselling The Tattooist of Auschwitz, will present her newest novel, Cilka’s Journey; bestselling Practical Magic author Alice Hoffman is back with her latest novel, The World That We Knew; and Akbar Gbajabiamila, host of American Ninja Warrior, will present his book, Everyone Can Be a Ninja.

“Akbar’s is an immigrant story, which I think is very important today,” says Morton. “His parents were Nigerian immigrants who wanted a better life for their children. That story resonates very deeply with us.”

The Marcus Jewish Center book festival also offers a popular lunchtime program. This year’s lunch event will be held on Wednesday, November 13, at 12 p.m. and will feature acclaimed chef and restaurateur Einat Admony in conversation with Ligaya Figueras, senior food editor at the Atlanta Journal-Constitution, about Admony’s new cookbook, Shuk: From Market to Table, the Heart of Israeli Home Cooking. Lunch, featuring recipes from the cookbook, will be served.

There are also the big marquee events — what Morton calls the “frosting on the cake.” In addition to Henry Winkler and Lin Oliver, they include Hillary Rodham Clinton and Chelsea Clinton speaking about their latest book, The Book of Gutsy Women, with Valerie Montgomery Rice, M.D., president and dean of Morehouse School of Medicine.

Individual tickets to the Clintons’ closing-night event sold out in record time, and if there were a specific theme running through this year’s festival, the popularity of Hillary and Chelsea Clinton’s reading perhaps speaks to it — this notion of powerful, inspirational women working to make big cultural changes.

“I would definitely say it’s the Year of the Woman for us,” says Morton. “We have so many strong, exciting female authors.” Those include Pulitzer Prize winner Jodi Kantor, who cowrote the juggernaut She Said: Breaking the Sexual Harassment Story That Helped Ignite a Movement with fellow Pulitzer Prize-winning reporter Megan Twohey. Pat Mitchell will also be sharing her book, Becoming a Dangerous Woman, at this year’s festival. Mitchell is a Georgia native, the editorial director of TEDWomen and was the first female president of both PBS and CNN Productions. Chelsea and Hillary Clinton’s closing-night event has sold out. (Photo by Joe McNally)

According to Morton and Profis, it wasn’t intentional, their packing the programming full of courageous women adept at breaking through stereotypes. But they do, when planning the book festival each year, work hard to make sure that the authors and events are a reflection of the topics people care about most.

“It really happens organically,” Morton says of planning for the festival. “It’s the most talked-about topics. That’s really what we’re looking for.”

Morton, Profis and the committee chairs at the festival recognized that the important cultural conversations people were having today were being led by women and were about women.

“Every year things skew a little bit, depending on what’s the topic of the day,” Profis says. “I noticed this year that there are a lot of women’s voices, and I think that’s because in this day and age, with the #MeToo movement, we’re hearing a lot more about women. I noticed we had a lot of books that kind of talk to that.”

Whether you’re looking to be inspired by change-making women, want to know about Israeli home cooking or are interested in politics and pop culture, the festival truly offers something for everyone, says Profis.

“You don’t have to be a reader to come and enjoy the book festival, because the topics of conversation are so compelling and interesting,” Profis says. “It’s just a wonderful way to spend an afternoon or an evening. And if people walk away with their next favorite author, that’s all the better.”