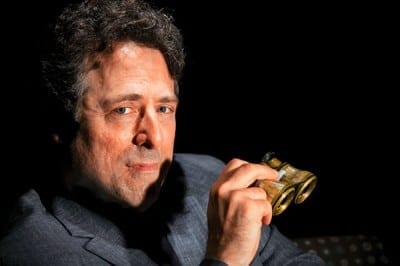 Skibell (at left), who will give a reading on Monday, February 7, established the streak of magic realism that defines his work in his debut novel, “A Blessing on the Moon” (1997). Told à la “Sunset Boulevard,” it opens with the death of its Jewish protagonist shot to death during the Holocaust (in which the author lost 18 relatives) and proceeds with his soul restlessly wandering the earth. “Blessing” was lauded in The New York Times Book Review as “rich with emotion, humor and invention.” It was followed by “The English Disease” (2003), a modern-day novel about an angst-ridden academic wrestling with Jewish traditions. (Photo by Jeffrey Allen.)

Skibell’s latest book, “A Curable Romantic” (Algonquin Books), has been blurbed as “intellectual comedy of the highest order.” Time-tripping and comprehensive in its treatment of the Bermuda Triangle of the human heart, it concerns Jakob Sammelsohn, a fin-de-siècle intellectual whose every attempt to find love is thwarted by fate. Over the course of its epic 593 pages, Sammelsohn is haunted by a dybbuk, mentored by Sigmund Freud and Ludovik Zamenhof (founder of the Esperanto movement), and visited by angels while suffering in the Warsaw Ghetto in 1940.

Skibell’s talk, at 6:30 p.m. in the Jones Room of Emory’s Woodruff Library, will be followed by a book signing.

ArtsCriticATL: Is the act of writing a pleasure or a chore?

Joseph Skibell: That’s a very interesting question. They say that writing is a fairly unnatural act. As a consequence, it’s not really very physically pleasurable — unlike drawing, painting, music or dance. Or even acting, I suppose. It’s more like a discipline, like running or lifting. Sometimes the pleasure comes in the middle of the work, and sometimes only after you’ve done the work — because you’re glad you did it, even though you didn’t actually really enjoy doing it. When I’m doing first drafts, I try to keep my page amount and my time at my desk very short, so that the joy doesn’t leach out of the project. When I’m rewriting, it’s less stressful, and I can spend whole days doing the work. ArtsCriticATL: Who would play Jakob in “The Curable Romantic” movie?

Skibell: Forty years ago, I’d have said Dustin Hoffman. Now, I’m not quite sure.

ArtsCriticATL: How many years of research went into the novel? Specificity bleeds from every page.

Skibell: Well, I did the research while I was doing the writing, trying to stay one step ahead of myself. I studied the early days of psychoanalysis. I learned Esperanto — many of the primary texts I used about Esperanto are available only in Esperanto. I immersed myself in memoirs from the Warsaw Ghetto. I felt I had to know more about the time period than I actually needed for the book. I wanted to know what I was saying as much as what I wasn’t saying. Novels from the time period were a great help. I read a lot of [Arthur] Schnitzler, for example. In a novel that’s contemporary with the time you’re writing about, you get a sense of how people think and feel in a way that you don’t from a history. In any case, I spent about five years writing the book and one year editing it, and the research took about the same amount of time.

ArtsCriticATL: Great writing is a result of discipline, research and inspiration, I would think. How do those things play out for you? (And is there some ingredient I have left out?)

Skibell: Luck. It’s a lucky day when your abilities, your interests and your inspiration all come together. At a certain point, once you’ve reached a certain level of technical proficiency — you’re no longer struggling with the aspects of craft — then the real question is, “Is this concept or character or plotline meaningful enough to explore?”

ArtsCriticATL: This story is so fantastical, but of course also grounded in Jewish experience. I wonder where you see yourself in Jakob’s story.

Skibell: Emotionally all through it. Although in all three of my novels so far, I’ve named a character after myself in a foreign language or in some other tricky way. A bit like Alfred Hitchcock’s cameo appearances in his films. Or a page of “Where’s Waldo.” But I don’t think anyone has noticed.

ArtsCriticATL: Where did you get your sense of humor? Were you born with it or did life’s caprice and cruelty drag it out of you as a coping mechanism?

Skibell: I come from a very verbal and comical family. My mother had a very dry wit. My father liked to tell jokes. As kids, my sisters and brother and I all competed in making comical asides. My sister Cindy, if she’d had the ambition, could have performed on “Saturday Night Live.” My extended family — cousins, grandparents, great-aunts and -uncles — all were funny people. Still, when we’re all together as a family, there’s nothing but laughter.

ArtsCriticATL: You were born in Lubbock, Texas. Was that a good place for a writer who happens to be Jewish to grow up?

Skibell: Well, Lubbock is a very flat high-plains sort of place, and as the great group of musicians and artists who come from Lubbock can attest, a 360-degree horizon seems to be good for the imagination. As for the Jewish part … well, it’s hard to say. Is growing up as “an exotic” good for a writer? Is it good for anybody? I suppose it gives you a certain ironic distance that might come in handy as a writer, but …

ArtsCriticATL: Who are the writers who inspired you as a kid and who inspire you now?

Skibell: As a kid, I was very much inspired by those great singer-songwriters of the 1970s, the true poets like [Bob] Dylan and Jackson Browne. That was the first indication to me of what a person might be able to do with words. There are lines of Jackson Browne’s that I carry around in my head to this day that just knock me out. As for novelists, the list is very long. I try to steal from everybody I can. And there are writers you might not expect. Chinua Achebe, for instance, the Nigerian writer. His work is very helpful for a Jewish writer.

ArtsCriticATL: In addition to your impressive gifts as a novelist, you are also the director of the Richard Ellmann Lectures in Modern Literature at Emory. Last year you brought the impish and utterly entertaining Margaret Atwood to Emory. Can you give us any hints about who’s next?

Skibell: Not really. There’s a short list, all really impressive people. We’ve never really had an American writer before — we’ve had American academics in the early days of the lectures — so I asked the selection committee to concentrate on American writers. That’s all I can say.

ArtsCriticATL: What is a writer’s greatest vice?

Skibell: Sloth. Envy. Greed. Lust. Et al. They all interfere with connecting, in a pure way, to the work.

ArtsCriticATL: Was there any noticeable spike in sales or in attendance at book signings after Oprah included “A Curable Romantic” in her eponymous magazine?

Skibell: What I noticed is that my aunts were really impressed, and some of my sisters’ friends started treating me a little better.