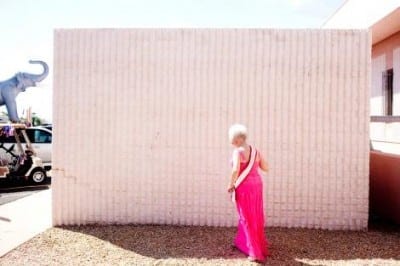 “The fourth wall” is a theatrical term for the metaphorical barrier that separates the performers on stage from the audience down below. It’s a wall that is never ruptured and allows the magic of the performance to unfold seamlessly. But it’s the wall between the spectator and the spectated that photographer David Walter Banks takes great joy in dismantling in the Jennifer Schwartz Gallery show “Escape,” running through February 26. Both Banks and his partner and fellow photojournalist Kendrick Brinson tackle the notion of “escape” by creating visual travelogues of modern life. Banks’ “The Fourth Wall” series looks at tourism and alternative realities, including wax museums, Florida’s Weeki Wachee mermaids and museum dioramas, via photographs taken in locations from Atlanta to Jerusalem. His fourth wall is the suspension of disbelief (that deer is stuffed, that palm tree is painted) we adopt in order to have fun.

Banks’ images catalogue our willingness to surrender to an alternative reality no matter how artificial or contrived. In “Wax Blessings,” popes rendered in wax offer ersatz absolution to a group of spectators. And in “Pardon Our Progress,” an enormous tarpaulin painted with a tropical scene has been draped over a building to disguise the work going on beneath. It is simulacrum in the extreme, where nothing is quite real, from faux jungles and topiary dinosaurs to antebellum plantations and zombie-haunted Johnny Rockets (at right). The images have the pared-down punch of political cartoons, conveying an idea in one quick gesture.

Brinson escapes into a different alternative reality: the retirement community of Sun City, Arizona, whose residents have created their own town, customs and lifestyle reminiscent of, but apart from, our own.

Sun City is a paradise, but it’s a paradise — like the one in the film “Never Let Me Go” — with a catch. Like some sci-fi Stepford, everyone is alike (old) and life appears to have a tamed and tidy sameness. Brinson captures that sense of order and routine in “Aerial,” a view of the carefully laid-out community whose homes radiate like rings around Saturn from the community center and social space at its center. The price of all that tranquilizing comfort: separation from the world of the living. And maybe, just maybe, that’s not such a bad thing. Brinson’s Sun City project allows you to see the fun of this world, its celebratory quality. (“You only live once!” is the refrain no one is speaking but every garland of plastic flowers and sequined costumes is screaming.) It is a “real” world in micro, with its own parades (to celebrate 50th anniversaries), beauty pageants (for a generation that the American beauty standard obnoxiously writes off as past her prime) and rituals of airborne balloons (though these are released at memorials, not toddler birthdays). The images are oddly comforting: people look happy.

Brinson documents a couple, “Velta and Gene,” in square dance-garb. The fabric of the epaulets of the husband’s shirt matches his wife’s dress, suggesting the extreme domestication and psychological surrender of long-married men at a certain point in their lives.

The Sun City photos are genuinely captivating, if only for illuminating the sad choreography of our own lives, whether 8-year-old or octogenarian, of having a grand old time in a succession of parties and activities that gussy up our own trot to the eventual dirt basement. The images at times tread a very fine line into comedy. An elderly man “walks” his little dog using his golf cart in “Dog Walk.” The firm, panty-hose-encased behinds of hottie grannies rehearsing a gymnastic routine take center stage in “Sun City Poms Perform.” But Brinson for the most part keeps snark on a leash.

Not to strike discord between Brinson and Banks, who both exhibit great talent, but juxtaposed side by side, the Sun City project comes off better. The specificity of this type of documentary project and Brinson’s ability to get us to think deeply about what we expect of aging (that it be dignified and joyless) tend to trump Banks’ clever mining of the ersatz/simulacrum that has been documented, often ad nauseam, by contemporary scholars and artists.

On a table in the gallery accessorized with vintage luggage is an arrangement of snapshots for a budget-conscious $5. The images turn the two photographers’ cameras on themselves: shots of each other, of motel stops and pretty vistas. They offer the ellipses, the more personal moments between the work documented on the walls.