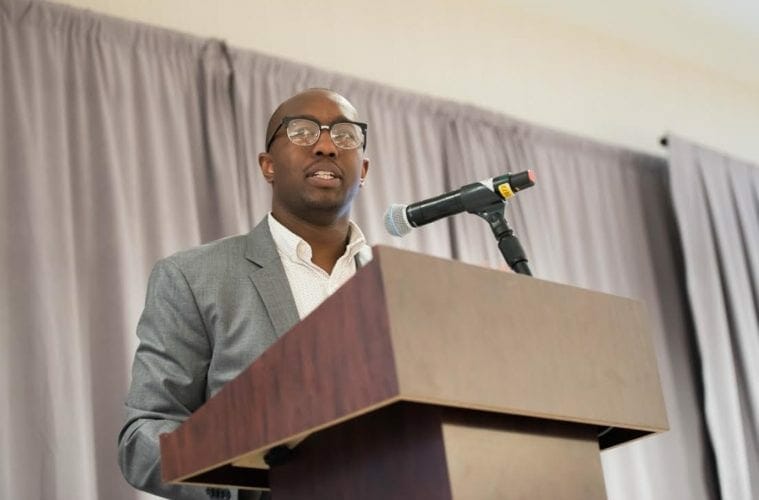 In Our Own Words: Jamil Jude, artistic director of True Colors Theatre Company

Once again, I find myself observing the weight of the opening paragraph of W.E.B. DuBois’ famous speech, delivered to the first Pan-African Convention in the summer of 1900. He states: “The problem of the 20th century is the problem of the color line, the question as to how far differences of race . . . will hereafter be made the basis of denying to over half the world the right of sharing to utmost ability the opportunities and privileges of modern civilization.”

The first time I wrestled with this idea was in high school after being introduced to his writing. I was no stranger to the privilege of access given to white people and the stacked odds faced by Black folks. In my hometown of Tallahassee, Florida, train tracks created a boundary between those with and without the privileges that Mr. DuBois speaks to. Yet, at 16, I became aware of the divide in a more profound way. I began to question the reasons for the disparity and the systems that created it. In hindsight, I realized that this first encounter with these words set me on a course to lend my hands in helping to bend the arc of the moral universe.

One hundred and twenty summers have passed since that speech, 17 summers since my quest began. I have cause to believe that while the work of so many has contributed to bending the stubborn arc, the fiendish and tireless work of the few to straighten and nullify our efforts is winning. It’s winning because far too many treat justice like a New Year’s Resolution — kickstarted into action by the swell of emotion from a shared experience, like watching the giant peach drop or seeing the deaths of so many Black and Brown trans and cis men and women. As the calendar turns, the buzz of the moment starts to fade, our resolutions turn into dreams deferred. But the arc straighteners get to work.

I don’t profess to have the solution to solve the persistent problem of the color line, but I posit this — if we all, especially white people who have the most “opportunity and privilege,” don’t actively work to root out the systems, unseat the politicians and rewrite the laws that got us here, the sun will set on far too many more summers before those of us on the sweet end of the color line will gain access to the abundance of the American experiment.