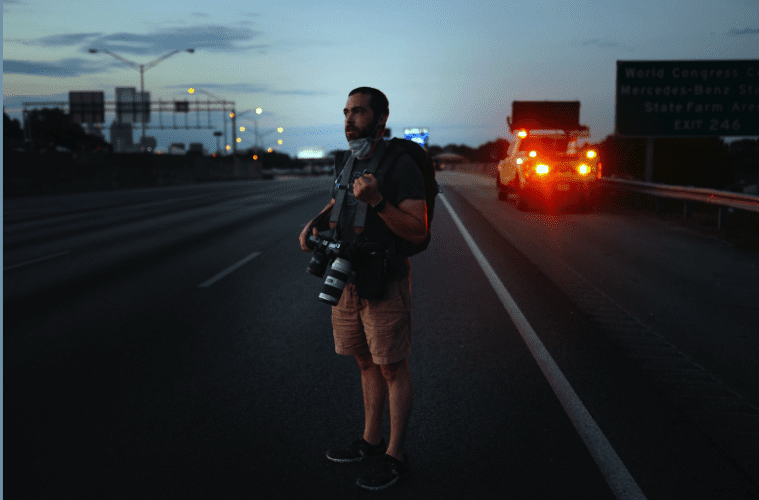 In Our Own Words: Dustin Chambers, an Atlanta photojournalist and filmmaker

Dustin Chambers’ photos of underrepresented communities in Atlanta and the Southeast reveal the invisible, elemental threads that unify us all. Chambers, an Atlanta native, has held staff positions at Creative Loafing and CNN, and his work has been published by The New York Times, The Wall Street Journal and Reuters. (Photo by Elijah Nouvelage)

On May 8, 2020, I documented a demonstration organized by Ahmaud Arbery’s family at the Brunswick courthouse. As the rally came to a close, his aunts Thea Brooks and Carla Arbery led protesters in a booming rendition of Stevie Wonder’s “Happy Birthday” to celebrate what should have been Ahmaud’s 26th birthday. Coincidentally, it was my 33rd birthday. A few months later, Atlanta Magazine commissioned me to photograph Thea and Carla. I wanted to show their resolve in the face of injustice, so we planned to meet at the small memorial where their nephew — whom they called “Maud” or “Quez” — was gunned down. I arrived early to scout the location, but the pain that emanated from that strip of asphalt was so palpable I texted the aunties a new location, several houses away, to spare them the agony of having to make small talk on sacred ground. We talked about the bugs, masks, the heat in greeting each other. Then Thea pointed over my shoulder and said, “. . . that’s one of their houses.” My stomach rose to my throat when I realized that the squat beige house overshadowed by massive oak trees draped in Spanish moss was the home of Ahmaud’s killer. A lichen-covered sign that read PRIVATE PROPERTY was nailed to one of the trees.

For most of my adult life, I have believed that photography was a tool purely for good — a universal language that could evoke empathy by reflecting the world back at itself. But photographic technology also has been used to debase and claim ownership of cultures, races, entire societies by imperial powers “cataloging” their material and human plunder, and white supremacists selling postcards of lynchings. The result is harmful, long-lasting stereotypes used to justify the continued policing of Black and Brown bodies. I can count on two hands the mistakes I’ve made in the field that are big enough for me to have recognized. I have no doubt that there are others that flew over my head. I’ve learned that as a white male photojournalist, it is imperative to be constantly aware of the balance between the societal importance of showing the truth of tragedy and re-traumatizing those who live in constant danger, as well as the irreparable harm that photographs made with unchecked privilege can inflict. That necessity of awareness should never be seen as a burden. It is simply the correct way to do the job.

If I were approached with this assignment again, I’d have a very serious conversation with my editor about why I was chosen and question whether Black photographers were considered. I will certainly be questioning my editors in the future. I say all of this because it feels pathological to not acknowledge the precarity of this balance considering the work that I do and the world that we live in. And it’s my mission to continue to grow in my own work in telling stories that matter and actively support Black photographers in my community. I want to grow my understanding of when to hold them and other photographers from marginalized communities up and when to simply get out of the way. Resources, mentorship and gear are things I can provide, but I also want to ask those photographers: “What, if anything, would be valuable to you?”