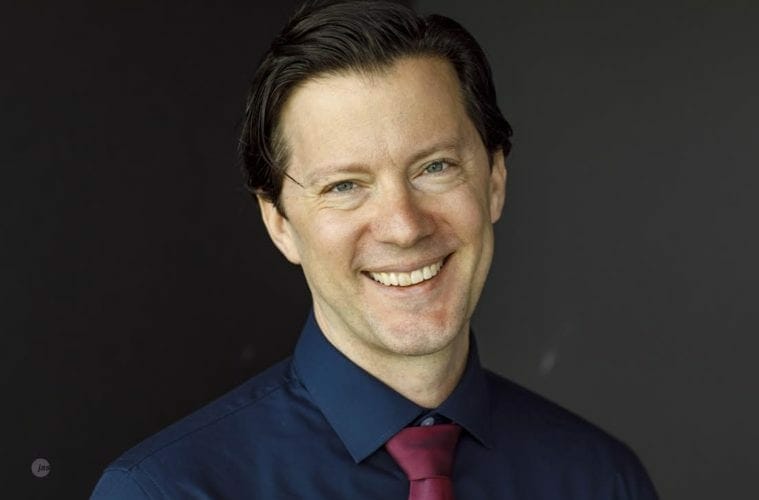 In Our Own Words: Adam Fristoe, an actor and director and educator

Adam Fristoe is a screen and stage actor, director, dialect coach and teacher. He has worked on most Atlanta stages as well as such the TV series Sweet Magnolias, The Walking Dead and Teen Wolf. Fristoe was co-artistic director of Out of Hand Theater until 2019, when he became a professor of performing arts at SCAD Atlanta. (Photo by Josh Stringer)

I grew up in a small South Georgia town, one that to this day welcomes passers-by with a giant Confederate flag flying over I-75. The road my family lived on was cut in half by a state highway. Our side was paved, with large houses built on foundations, owned by their white occupants. On the other side, the road was dirt, most of the houses were manufactured and rented mostly by Black families. Disparities in school were crystal clear as well, with the “gifted” classes being disproportionately white. I remember being punished in eighth-grade history for insisting we talk about the fact that the Founding Fathers were slave owners. Our churches were segregated and still are. Our entertainment was segregated and still is.

I say all this to acknowledge that the racism built into the fabric of our country has been clear to me from a young age. At the same time, I must acknowledge that I, a white man living in a society designed to favor me, lose sight of it. And I make mistakes, overlook disparities, fail to include everyone, use the wrong words, make the wrong decisions. Big events — the murder of George Floyd, the beating of Rodney King, the Crown Heights riots, the tragic gun death of a friend in middle school — always bring me back to activism, marching, responding with storytelling, re-examining and retooling. And these actions matter. But if I’m not vigilant, I become complacent. It’s this sort of complacency that thwarts change.

Is there hope? Oh, yes. The protests have been powerful and have moved many people’s hearts and minds. The Atlanta theater community has been engaging in serious reflection and reckoning. It has been painful and messy and will bring real change as long as we stay vigilant.  In the film and television world, we must prioritize stories that will change the way we think about ourselves as Americans, that bring truth to our racial history and create opportunities for reconciliation. Hollywood producer Scott Budnick’s incredible work and leadership, forging meaningful prison reform across the country, is a great example to follow. In our colleges, we must re-examine our hidden biases, ask who’s not at the table, check and double check our methods and materials, and dismantle harmful ingrained practices. I’m particularly hopeful for the collaborative work happening in Out of Hand’s Equitable Dinners: Lift Every Voice monthly program, featuring new plays by BIPOC authors and performers, speakers who are major thought leaders in the field, facilitated conversation on difficult subjects, and a partnership team of powerhouse social justice organizations.