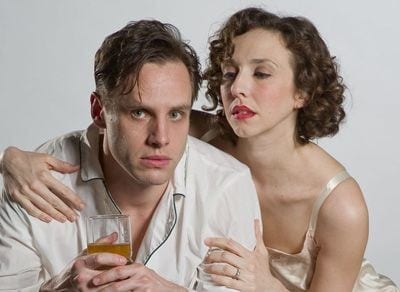 Launching its 24th season, Georgia Shakespeare represents a cool cultural oasis in Atlanta’s summer heat. It wasn’t always so. The company began its initial, four-week run in 1986 in a sometimes-stifling tent on an Oglethorpe University athletic field within honking distance of Peachtree Road.

“People nostalgically think, ‘Oh, the tent was so nice,’” producing artistic director Richard Garner says. “But usually, it was too hot.” Hot for the audience, scorching for the actors. Garner recalls the late, beloved Atlanta actress Suzi Bass, cooling down behind the stage: “We had fans set up in back. I remember walking back there one of those hot summer nights, and she had her dress hiked all the way to her thighs, spread-eagled, with all the fans blowing on her.

Heat was just the start of it. In those first few summers, Georgia Shakes was as much a M*A*S*H unit as a theater. Like sweaty physicians, its actors labored to deliver live, vital Shakespearean performances while contending with mosquitoes, the earth-shuddering chug of trains on the far side of Peachtree, the drone of planes to-and-fro’ing from PDK airport… and yes, the occasional monsoon and cataclysmic lightning display.

Performances would come to a temporary halt while crew members dug trenches for flooding and made sure the canvas roof wasn’t pooling with rainwater. Garner himself would make an appearance, playing the equivalent of a high-arts flight attendant downplaying turbulence.

“My job,” he says, “was to calmly walk from backstage, so the audience could see me, with a very calm look on my face.” A look that said, Fear not, this is nothing, we’re used to lightning. (And please forget that all these metal tent poles are basically a bunch of lightning rods!)

Until the mid 1990s, the future of Georgia Shakespeare (which then had “Festival” appended to its name) sometimes looked as shaky as its stage. “It was so hand-to-mouth, financially, the first few years,” Garner says. Nowadays, far from the upstart status of its early days, Georgia Shakes is now an institution, nestled for more than half its existence in the permanent theater on the Oglethorpe campus.

The persistence of Garner, a recurring roster of directors, and those dozens of sweaty actors paid off. The company now includes nearly 50 artistic associates, some more than 20-year veterans. The effect for longtime theatergoers is a little like a reunion, a chance to see familiar faces in unfamiliar roles.

The season kicks off with the June 12 opening of “A Midsummer Night’s Dream,” directed by frequent Georgia Shakespeare director John Dillon. (Allison Leigh Corke and Joe Knezevich, in Renaissance garb, as Helena and Lysander. Photos by Bill DeLoach.)

“Cat on a Hot Tin Roof” follows on June 25, helmed by former Actor’s Express artistic director Jasson Minadakis. (In pajamas, Daniel May as Brick and Courtney Patterson as Maggie.)