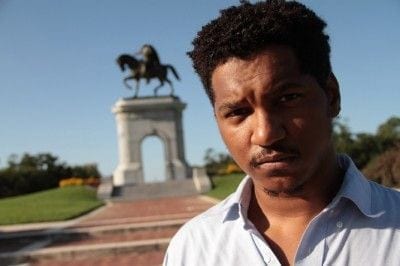 Angelbert Metoyer, an American artist of Creole descent, is best known for seductive mixed-media works that make use of a fluid line, sumptuous colors and gestural brushstrokes. References to African and Western myths, mathematics and astrology, not to mention doubled images and animals, create the aura of cosmic meditation. Metoyer attended the Atlanta College of Art and has built a following here.

Charlie Koolhaas, a globe-trotting Dutch photographer, is fascinated by 21st-century cities shaped by an ever-shrinking world. Her eye, a good one, is informed by a background in sociology and a sophisticated awareness of urban systems that she couldn’t help but have absorbed from her architect father, Rem Koolhaas, himself a global phenomenon. A recent exhibition, “True Cities,” explored the connections among seemingly disparate urban centers: Dubai, Lagos, London and Guangzhou, China.

The newlywed couple has begun a collaboration. Their mixed-media works are the centerpiece of “Global Static,” an energetic if disjointed and ultimately disappointing exhibit at Sandler Hudson Gallery.

The collaboration includes collages, mirrored glass constructions and mixed-media photo-based pieces. In the latter, digitized versions of Metoyer’s drawings overlay Koolhaas’ monumental photos. In “Global Static: China”, his drawing of a group of expressionless men who are compacted into a cube floats atop Koolhaas’ view of the backside of a Guangzhou tenement. In “Global Static: (Golden Wood) Lagos Market,” a drawing that is barely discernible but clearly doubled like a Roschach test spreads like lace over a colorful market scene.

From what I gathered at their artist talk, the themes Koolhaas staked out in “True Cities” were the starting point. The figural group in the China piece, which reappears elsewhere in the show, might symbolize the migrants, crowds and nomads who are interchangeable pawns of the global economy. One might read the Lagos piece as that the material world is caught in an unseen web — the global static of the title.

These pieces have a poetry the others lack. The mirrored hypercubes are gimmicky and hard to see. The collages, though formally adept, use text in a simplistic way.

And the rest of the show, Metoyer’s works on paper — his “Songkeeper” is pictured here — is such a hodgepodge that one can imagine that he grabbed a fistful of pieces on the way out of his studio and pinned them to the wall in order to fill the gallery. “Global Static: Bank Note,” the largest piece, is a slapdash collage, devoid of his usual finesse. Furthermore, it reminds us of the debt he owes to a former classmate, Atlanta artist Radcliffe Bailey.

Perhaps Metoyer, who also makes film and music, has lost his enthusiasm for the kind of work that has been his bread and butter. It might be that we are catching him at a moment of transition. Judging from the YouTube footage of “True Cities,” it appears that Koolhaas’s work has more impact on its own. Perhaps the collaboration will bear fruit in the future — for both of them.