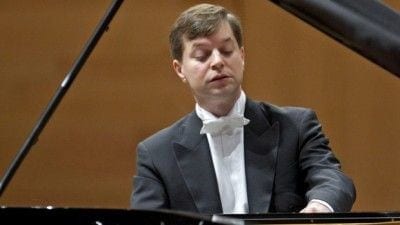 CD review: Bach for kids, played by a master

Blake’s perception of “the universe in a grain of sand, and heaven in a wildflower” applies equally to Bach’s Two- and Three-Part Inventions — those domestic studies written to teach his kids how to play two lines of music sounding together, and then three lines sounding together.

These pieces typically last only a minute or two. But they yield continual insights of how creative genius — operating with only the slightest materials — can make much from almost nothing at all. Played routinely, as practice exercises, the Inventions sound like exercises; performed well, they belie their simplicity and offer stabbing emotional rewards.

Till Fellner, an Austrian, is the latest pianist to enter what has become a crowded field. His recording of these pieces, on the boutique German label ECM, is marvelously articulated and colored, and decorated with ornaments that never clutter Bach’s immaculately clean lines — but add wit and point to Bach’s tightly bound structures. Fellner accords each piece its own distinctive character. Some sound like fleeting, diaphanous Schumann or Grieg miniatures. Others trade phrasing, dynamics, and glinting rhythmical figures in relaxed conversational formats that end as soon as their content has been logically traversed.

All of it sounds like Bach and no one else, but that impression owes much to Fellner’s brimming technique and highly intelligent musicality. Rounding out the disk is a piquant French Suite No. 5.

How does Fellner stack up with the competition? Canadian pianist Angela Hewitt (on Hyperion) gets even better sound and is easily Fellner’s equal in the bigger pieces. The most emotionally freighted of the bunch is the F-Minor Three-Part Invention, which Fellner plays superbly but not so well as that other Canadian pianist, Glenn Gould, in his ancient 1964 recording (on Sony, now remastered). His wreck of a piano remains infuriatingly unresponsive and inadequate. Still, this is Gould at his most passionate, searching, and virtuosic, and his CD features complete performances of three-part inventions released for the first time, plus fascinating studio takes of the same three pieces recorded at the same 1955 Goldberg Variation sessions that put Gould on the map. In spite of the piano — and yes, the ubiquitous Gould humming — you may conclude that this is some of the greatest Bach playing by anyone, ever. But if Gould’s rampant idiosyncrasies drive you up the wall, Fellner’s poetic explorations, in notably fine sound, provide a stunningly attractive alternative.