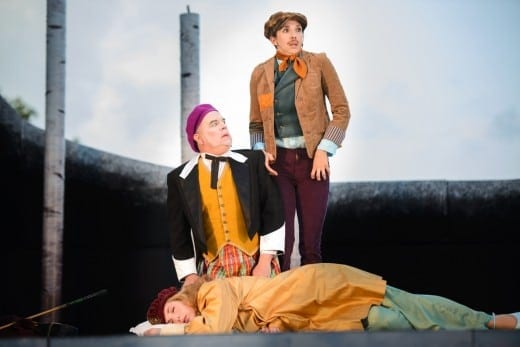 Review: The leads, the music and the spiffy setting — all likeable — in “As You Like It” 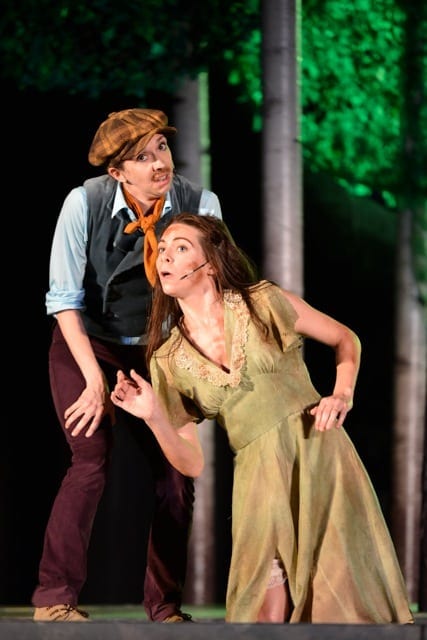 Courtney Patterson, left, as Rosalind, and Ann Marie Gideon as Phoebe in Georgia Shakespeare’s As You Like It at the Conant Performing Arts Center until June 29. (All photos by Greg Mooney)

In a weird way, the Geller Girls are back on stage — the practical, sensible, aspirational Rosalee as well as the passionate, impulsive, dreamy Louisa.

Atlanta actresses Courtney Patterson and Anne Marie Gideon memorably played the two sisters from turn-of-the-century Atlanta in Janece Shaffer‘s hit play The Geller Girls at the Alliance in January. Now they are back on stage in Georgia Shakespeare‘s production of As You Like It, with Patterson taking the lead role as the incisively intelligent, witty, pragmatic Rosalind and Gideon playing the smaller role of Phoebe, the shepherdess who impetuously falls for Rosalind in disguise as a boy. 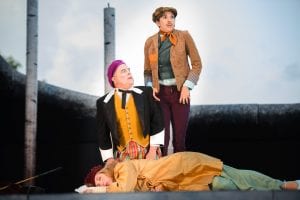 Molly Coyne, foreground, as Celia, Allan Edwards as Touchstone and Courtney Patterson as Rosalind in Georgia Shakespeare’s As You Like It.

The two shows don’t share a whole lot in common, I suppose, but audiences eager to relive the charms of the two leading ladies from Geller Girls supported by fine casts will find no shortage of funny, winning scenes in As You Like It, which runs through June 29. It was a production that premiered in Piedmont Park for Georgia Shakespeare’s annual Shakespeare in the Park performances in early June but has now moved to the Conant theater on the campus of Oglethorpe University in Brookhaven.

As You Like It tells the story of Rosalind, the daughter of an exiled duke, who upon being exiled herself decides to disguise herself as a boy and run off with her closest friend and the court fool (it all sort of makes sense): they end up in the forest of Arden, where her father has been hiding out, leading an Edenic life in spite of the caustic observations of the embittered courtier Jacques (here played by Chris Kayser as a sort of world-weary individualist, a melancholy philosopher with little use for the world).

Overall, the production is a colorful, stylish, smartly paced confectionary. It’s not a production in which viewers will be drawn to contemplate the depths of Shakespeare’s characterization or his barbed satire of the tropes of the pastoral genre, but when the fun stuff is right on target, who cares? Brian Kurlander as the paranoid tyrant Duke Frederick and Joe Knezevich as the equally jerky Oliver are great villains; Patterson is a witty, easy-to-love Rosalind (her scenes with Gideon are among the play’s best); and Allan Edwards turns the fool Touchstone into a fussy and observant, if eccentric, pragmatist. 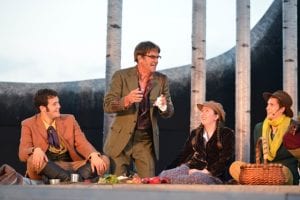 Antonio Mantica as Martext, Chris Kayser as Jacques, Meghan Wallace as the Shepherdess and Patrick Wade as Forester.

Shakespeare’s comedies are full of music — they’re actually musicals — and it’s lovely that this fact is not forgotten here. The music is given a wonderful life in arrangements by Kendall Simpson and interpreted nicely on-stage by all involved, but especially by young actress Paige Keane playing acoustic guitar.

New this season is the spiffily redone outdoor picnic area with festive hanging lights, new picnic tables and globe lights placed around the garden. With everything exactly as you like it, it’s hard to imagine a better summer evening at the theater.