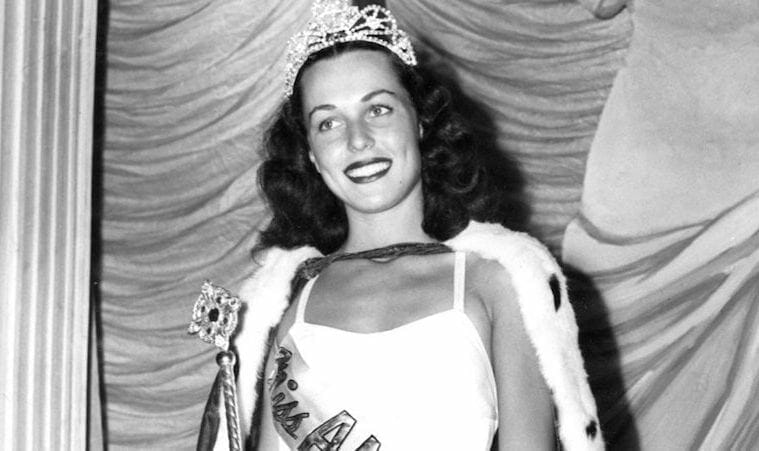 Bess Myerson, the newly crowned Miss America, in 1945. The documentary "The One and Only Jewish Miss America" (51 minutes) screens at 1 p.m. Friday.

The Cobb International Film Festival has been around for several seasons, but this year’s edition may have more eyes than usual on it, as organizers present a rare live event in the midst of Covid–19. The festival runs Thursday–Sunday (July 30–August 2).

The event, now in its sixth year, uses the Strand Theatre on the Marietta Square as its hosting venue.

Richard Tavernaro, a former teacher and counselor, decided to try acting and filmmaking in 2010 and has succeeded. His credits include a role in the 2013 baseball movie 42 (shot partially in Macon) and serving as screenwriter for 2017’s Slaw, a parody of the Saw films. His Long Shot Productions has a movie coming out in the fall, a family film titled Game Changer, and he’s joined the Producers Guild of America.

As Tavernaro was sending his films off to festivals around the world, he realized that Cobb County didn’t have one of its own and saw the Strand as a perfect venue. The theater dates to 1935, when it began showing movies, closed in 1979 and reopened in 2009 after a $5 million renovation. Organizers of festivals often rent the cheapest thing they can find, Tavernaro says. He called the Strand’s Andy Gaines and asked why the venue had never held a festival.

No one had ever planned one, Gaines told him, so Tavernaro volunteered. The two began collaborating shortly after the inaugural fest, a one–day event called the Marietta International Film Festival, in 2015.

Many recent film festivals have gone virtual, but Tavernaro decided to hold a traditional event with in-person screenings (with Covid–19 safety precautions). He says he’s not aware of any others that have done this. “Filmmakers are not real happy with the digital format,” says Tavernaro. “I said, ‘We are going to do this in person in the theater or we are not going to do it this year.’ I don’t think it’s fair to have films online. My board wasn’t sure at first that we were going to be allowed to do it, but there was never a discussion about going digital.” “There was never a discussion about going digital,” founder/executive director Richard Tavernaro says of the Cobb fest, which will screen 69 features, documentaries and shorts.

The festival has a Covid–19 protocol plan that exceeds the state’s requirements for theaters. “We are trying to take an overindulgence of caution,” Tavernaro says, “because we are in uncharted territory.”

All attendees must wear masks. If you don’t bring your own, one will be provided. Volunteers will take filmgoers’ temperatures and social distancing will be enforced. A maximum of 200 people (capacity: 600) will be admitted and ushers will escort patrons to their seats. Groups of up to six can sit together. The Strand will be cleaned twice between screenings on Saturday and Sunday. Many events that require groups or close proximity, such as breakout sessions, have been nixed this year.

Tavernaro says he’s gotten positive feedback from filmmakers and some patrons who plan to attend.

The festival will include 69 films — 10 features, eight documentaries and 51 shorts from 15 countries. Seventeen are from Georgia. Among the higher–profile selections are The One and Only Jewish Miss America (2020), a look at how Bess Myerson — later a politician, model and TV personality — won the crown in 1945, and the thriller Dark Harbor (2019) with Joel McHale. (Complete lineup HERE.)

One film that won’t screen is Bring Me a Dream by Atlanta director Chase Smith. When the lineup was announced, actor Libby Blanton took to Facebook to share negative experiences she had on-set with Smith’s Creature Feature (2015) and Dark Roads 79 (2017). Atlanta art director and activist Molly Coffee followed with a call to protest the festival. Tavernaro says he wasn’t aware of the issue before it was brought to his attention. He spoke to Smith, who asked to pull the film.

“My focus is my festival and making it the best possible experience for the filmmakers and fans who attend,” Tavernero says. “If it’s possible that what we are doing can lead to others doing the same, great.”