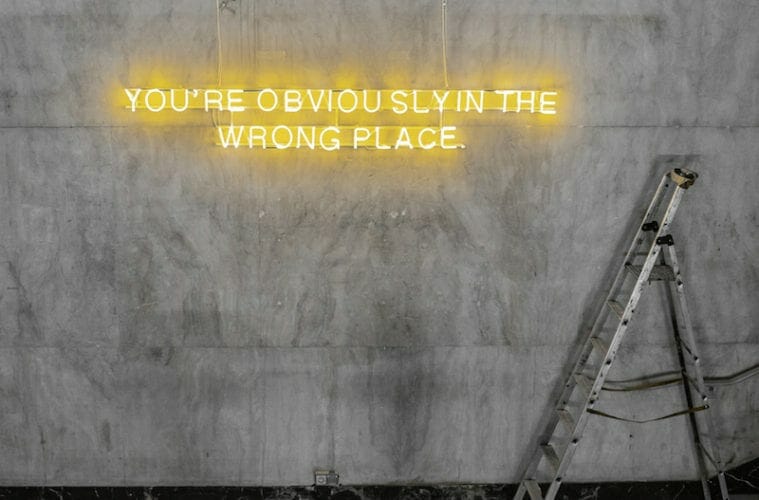 “Figures of Speech” at the High tells “the story arc of my career,” says Virgil Abloh

Virgil Abloh grew up near Chicago to Ghanaian immigrant parents. He knew his father wanted him to be an engineer, so he studied civil engineering and earned a master’s degree in architecture, figuring it was the least he could do to repay the man who selflessly put him in a position to flourish.

Once Abloh indulged his eclectic interests, however — everything from hip-hop to skate-punk subculture, to analytics, aesthetics, fashion and design — he managed to will into fruition a life that far exceeds anything his father might have imagined. 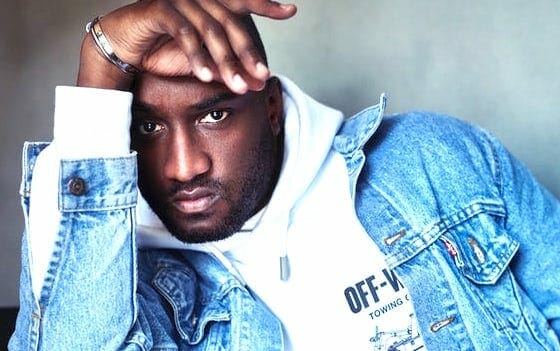 Architect. Graphic designer. Kanye West collaborator. DJ. CEO/founder of the Off-White fashion label. Creative director of Louis Vuitton’s menswear division. Virgil Abloh, who grew up with Ghanaian parents outside Chicago, is all this and maybe more. (Photo by Christian Anwander)

When Virgil Abloh: Figures of Speech opens November 12 at the High Museum of Art, the 20-year survey will pull back the curtain on Abloh’s process as an architect, graphic designer, DJ, Kanye West collaborator, CEO/founder of the Milan-based Off-White fashion label and creative director of Louis Vuitton’s menswear division. He seems to personify the word “influencer,” and, in fact, Time magazine named him one of the most influential people in the world in 2018. The High exhibition is one of the most notable events on Atlanta’s Art + Design calendar this fall and winter.

Figures of Speech was organized by the Museum of Contemporary Art, Chicago, where it became the third-most attended show in museum history. It runs through March 8 in Atlanta and includes most of the work seen in Chicago and a few pieces new for Atlanta. Among the offerings are video documentation of Abloh’s most iconic fashion shows, furniture designs for IKEA, ballerina-inspired dresses he made for Serena Williams during last year’s U.S. Open and the neon sign from a 2016 Off-White runway show that reads YOU’RE OBVIOUSLY IN THE WRONG PLACE (the line spoken by a condescending saleswoman to Julia Roberts in Pretty Woman). 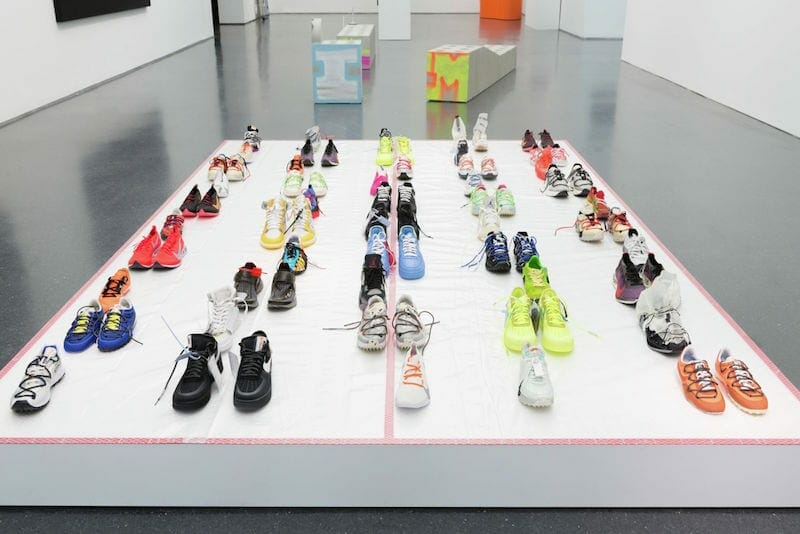 “Shoes,” from the “Figures of Speech” exhibition in an installation view from the Museum of Contemporary Art, Chicago (Courtesy of the museum)

Abloh, 39, announced in September that he was slowing his travel schedule. He spoke to ArtsATL via email about his arc as a self-starter in fashion, the inevitability of cultural appropriation and curating the kind of exhibition his 13-year-old self would have begged to see.

ArtsATL: Growing up outside Chicago, you were heavily influenced by indie, rock and hip-hop music and skate culture, but you’ve described yourself as “the opposite of a rebel type.” How have you reconciled that duality as an artist?

Virgil Abloh: I don’t have angst. My point of view as an artist is more of a side-eye of reality. As an adult, I question notions I assumed as fact as a child. I find all of my freedoms come from the fact that I seldom believe in absolutes.

ArtsATL: How has Marcel Duchamp’s art-making practice inspired your approach to fashion design?

Abloh: More to the fact that Marcel Duchamp changed the physical world. For me, it changed everything, not limited to fashion design. 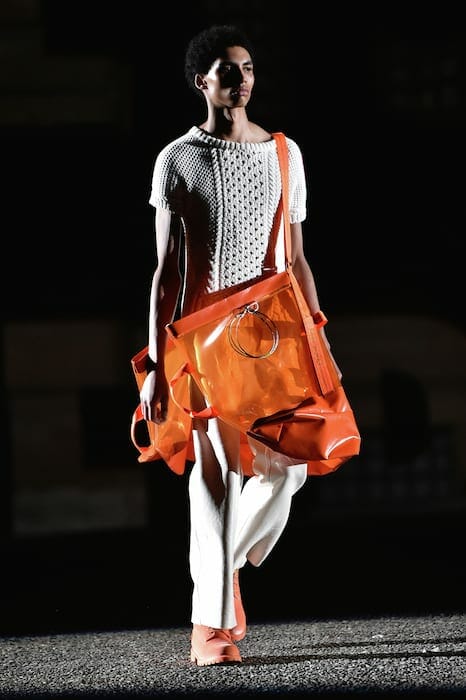 ArtsATL: Nobody wants to be accused of cultural appropriation, but you own the fact that a lot of street fashion is an appropriation of high culture. Can there be innovation, within any genre of art, absent appropriation?

Abloh: The world doesn’t exist in a test tube. Humans have existed for 50,000 years. I’m often confused at the notion that ideas in art aren’t built on “ideas” just before and the overall context. I do understand the lust for genius of making something absolutely new. To me, it says a lot about man’s quest to be a creator. When it comes to things like street fashion, it’s all just clothes. What makes me interested is the perception of “high culture” and the reality of it. In reality, everything affects everything, so for me, keeping things in different silos is a myth.

ArtsATL: You often use the phrases “tourist” and “purist” to describe your approach. What do these terms mean, and how do they impact the way we experience art and design?

Abloh: In my survey of the world, I have identified two tribes of people when it comes to “high culture” and its impact on the masses. A “tourist” is someone who is eager and interested to seek out new information and learn — ultimately driven by seeing. They travel to Paris and go to the Eiffel Tower to see and take pictures of it figuratively. They absorb art, fashion, music — i.e., culture — the same way.

A “purist” is a learned individual who is equally important but is guarded by their knowledge. They can tell you histories of any art movement, the logic of it, et cetera. They prop up the very idea of “high culture.” The walls of the art world, fashion world, et cetera, are made by this network of knowing, borderline constructive snobbery.

I have, in my research, found that dialogue between these two sets of people is the most important. I strive to make artwork and ideas that force those two subsects of people to cross paths. That’s my artistic premise at a glance. 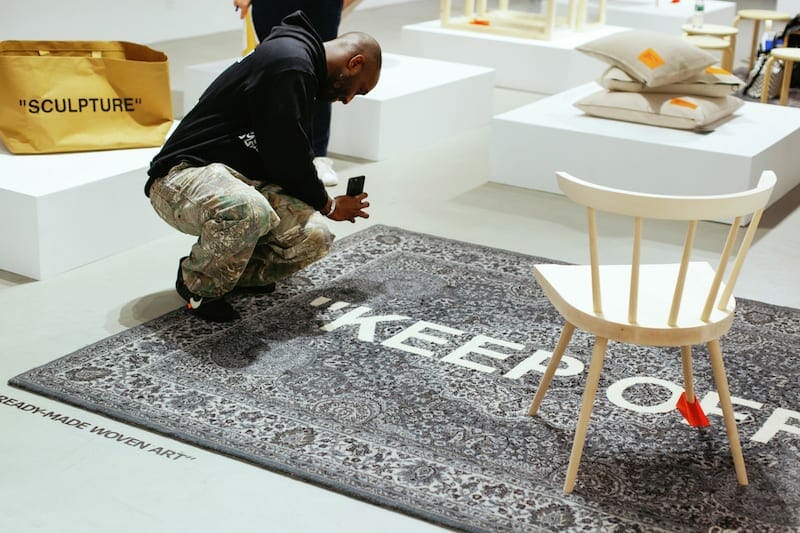 ArtsATL: You’ve been quoted as saying, “Michigan Avenue had what we were looking for — Nike, Louis Vuitton — but not the art museum.” What was it about fashion that interested you as a teenager? What was it about the art museum that did not resonate? Is Figures of Speech an attempt to reverse that migration — from shopping meccas to cultural institutions — among young people?

Abloh: Fashion you can grasp. It’s something you can touch. The name brands were embedded in the rap music and pop culture, which my generation was immersed in. An art museum at minimum feels like it’s for rich people. But not just “rich” in knowledge, like a purist. Of course art museums are important, but the barrier to entry is high and, by design, truly for a select few. Again, I love the space and friction between the two, not just one or the other. Embedded within Figures of Speech are these exact conundrums, which young people easily translate. The future of the art world is for them to decide. I’m investing in that future, in the end.

ArtsATL: One of High director Rand Suffolk’s primary goals is to make the space more inclusive. When you were 13 years old, would you have visited Figures of Speech? Would you have felt comfortable at the High? If not, what would it have taken to make you feel welcomed and eager to engage with the art?

Abloh: The 13-year-old version of myself would have begged my parents to fly to Atlanta to see this type of exhibition. I would, from A to Z, absorb the works. I would read the book. I would rifle through the gift shop. I would feel like the High Museum was heaven-sent because it spoke my language. Mind you, when I was 13, I wanted to jump inside my headphones or a magazine to get closer to the artists I loved. The obvious beauty of museums is they are safe places to absorb the story of an artist firsthand. If the world lacks anything, it is that very notion. 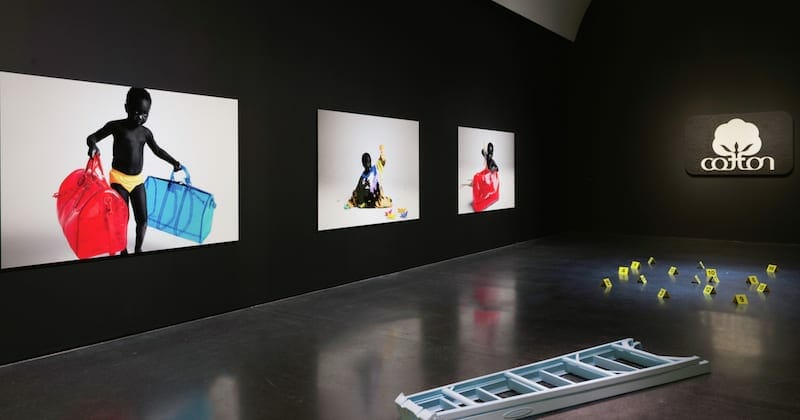 Another section of “Figures of Speech” in Chicago (Courtesy of the Museum of Contemporary Art, Chicago)

ArtsATL: The show blurs the line between art and commerce. Was this your intention? How do you distinguish one from the other?

Abloh: By design, the show does that. It’s the story arc of my career. As a child, the world did not present itself to me that I could be a designer or that I could make things people would consume. Designers/artists I knew weren’t black and from Third World countries like Ghana. They were from Europe or somewhere else that wasn’t me. 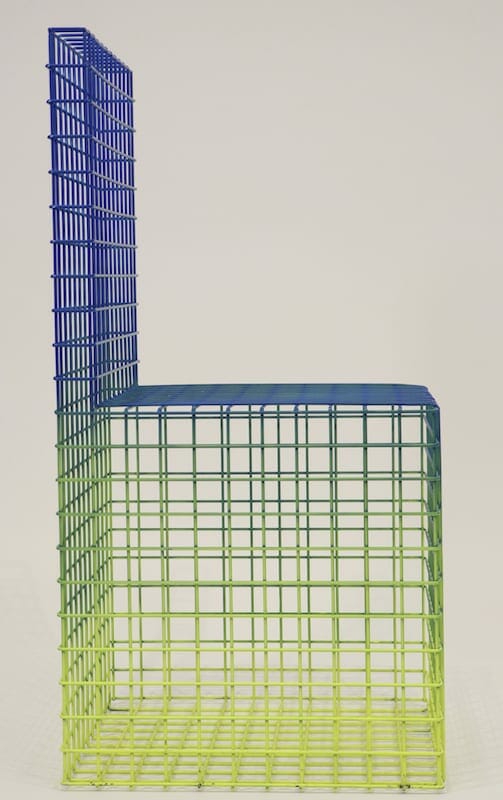 For my 13-year-old self, I forced myself past consumer to creator. I formulated my own design language through fashion and art to make signifiers. Whether that be a new language of Helvetica quotes, or diagonal lines, I make objects that are commercially available with an embedded artistic statement. I dissect advertising, injecting deeper messages through globally recognized brands. The exhibit threads a needle through actual living, breathing work. It is the engine of Figures of Speech to be one big gray area that is actually our everyday lives.

ArtsATL: Some of the graphics in your exhibition can be interpreted as a criticism of consumerism. But when juxtaposed with prototypes of materialism — glass cases filled with limited-edition Nike sneakers — the message is compromised. Your thoughts?

Abloh: Consumerism is a fact of life. I would never criticize consumerism, as it’s not a profound epiphany. I’m more interested in thinking past knee-jerk notions. Nike’s sneakers in a museum, on the other hand, I find interesting on a multitude of levels.

ArtsATL: Atlantans will miss feting you at the opening of Figures of Speech, but is there something you’d like to say to the young person who, like you were, is moved by fashion but has no idea how to participate in the conversation in a meaningful way?

Abloh: As obvious as it sounds, it’s as easy as just starting. This lifelong pursuit of finding oneself and discovering a rationale that leads to an art practice is achievable by each and every person. It’s just a matter of looking deep and making your own vision of the world.