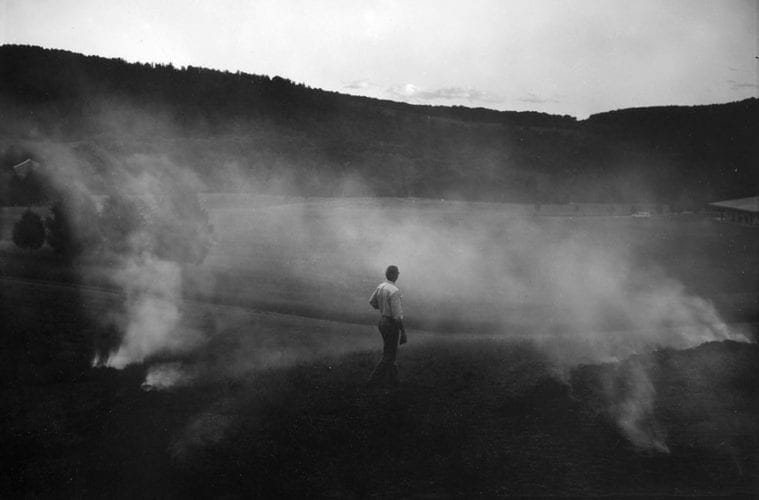 "The Turn" (2005), a gelatin silver print by Sally Mann. "As ephemeral as our footprints were in the sand along the river," she wrote, "so also were those moments of childhood caught in the photographs."

We’ve singled out 10 shows that feature seven artists (and, in one case, a cast of at least 100). Note that both Bearden and Mann will receive large exhibitions at the High Museum of Art and complementary concurrent shows at Alan Avery Fine Art and Jackson Fine Art, respectively. We also offer a sort of “honorable mentions” list.

And we’d be remiss not to recommend you check out anything you can by such contemporary Atlanta artists as Lucinda Bunnen, Peter Ferrari, Shanequa Gay, Charmaine Minniefield, Fahamu Pecou, Brandon Sadler and Tiny Doors ATL, among many others. But don’t stop there. The metro area has dozens and dozens of galleries to discover and hundreds of artists to appreciate.

That said, here are ArtsATL‘s 2019–20 top picks, in chronological order.

American abstract artist Mildred Thompson (1936–2003) spent much of her early career in Germany and France in response to racial and gender discrimination in the United States. In 1986, at about age 50, she joined Spelman College as an artist-in-residence, living in Atlanta until her death, and earning acclaim for her painting, sculpture, drawing, printmaking, writing and musical exploration.

This Spelman show, curated by museum director Andrea Barnwell Brownlee and the Thompson Estate’s Melissa Messina, is the first large-scale, interdisciplinary solo exhibition for Thompson in the city.

“My work in the visual arts,” Thompson once said, “is, and always has been, a continuous search for understanding.”

Something Over Something Else: Romare Bearden’s Profile Series

The iconic artist Romare Bearden (1911–1988) was African American, but his beautiful work was universal and transcended race. Although he was born in Charlotte and raised in New York City, he made such an impression on Atlanta that his presence is still palpable three decades after his death. We’re lucky enough to witness his genius — he was a cartoonist, painter, muralist, collagist and musician — in exhibitions this fall at the High Museum of Art and at Alan Avery Art Company. The Romare Bearden collage “Farewell Eugene”  (1978) from the “Profile/Part I, The Twenties: Pittsburgh Memories” series.

The High show, the larger of the two, is the first to reassemble Bearden’s Profile collages since they were first seen in New York in 1979 and 1981. He began the autobiographical project in 1978, organizing it by the decades of his life. It begins with his earliest memories as a boy in North Carolina and ends in the early 1940s with his life as a young artist in Harlem. More than 30 collages can be seen in their original order with the text Bearden intended for them.

“When I conjure these memories,” Bearden once said, “they are of the present to me, because after all, the artist is a kind of enchanter in time.”

Atlantans might remember Chris Verene from his 1980s boho days as part of the art and music scenes in Little Five Points and Cabbagetown. They might also remember his indelible photographs of everyday people.

Verene, now 49, has made documenting the lives of extended family and friends in Galesburg, Illinois, his life’s work. In 2009, he began shooting film to augment the still images. Both bodies of work are titled Home Movies and are still in progress today. Galesburg, a city of 32,000, is Verene’s hometown and a place that has seen its share of joblessness, homelessness, poverty, mental illness and drug addiction. Verene has been photographing its people since he was 16, recording them in their day-to-day lives and milestone moments.

In addition to being a conceptual and documentary photographer, the grown-up Verene is a musician, a performance artist and a professor at CUNY College of Staten Island. For him, as this 12-photograph collection at Marcia Wood Gallery shows so vividly, there’s obviously no place like home.

Interconnected features encaustic and mixed-media paintings from Donna Johnson, who’s based in Atlanta and Cashiers, North Carolina. Each painting here, she says in her artist’s statement, began with a drawing — sometimes a rediscovered watercolor or etching monoprint  but most often a drawing from her sketchbook.

“I found myself making marks of repeating shapes,” she writes. “I looked at them and puzzled as they seemed so familiar. The word ‘dendrite’ came to mind. In fact, they were much simpler cellular shapes, but in researching dendrites I was struck by their universality as nerve cells most frequently found in the brain, occurring in all animals. That universal occurrence made me reflect on the interconnectedness of all living creatures.”

Johnson, who’s represented by Reinike Gallery, is a retired Jungian psychotherapist who has worked as an art therapist and licensed clinical social worker. She studied painting at Wake Forest University while earning a B.A. in psychology, and earned an M.A. in painting (specializing in encaustic) in 2008 at SCAD. This large contemporary art show — coproduced by Fulton County Arts & Culture and the Goat Farm Arts Center — will feature the work of more than 100 Southeastern artists, from emerging creatives to those in midcareer.

Organizers say the show was inspired by the Times Square Show of 1980, which introduced the art world to the likes of Jean-Michel Basquiat, Nan Goldin, Keith Haring, Jenny Holzer, Kenny Scharf and Kiki Smith.

The show takes place in four stories of the historic downtown high-rise Giraffe, near the intersection at Five Points. It’s being curated by representatives from SHOWERHAUS Gallery, TILA Studios, MINT, The Creatives Project and artists Miya Bailey, Doran Hickey and Y. Malik Jalal.

“To identify a person as a Southerner,” photographer Sally Mann once said, “suggests not only that her history is inescapable and formative but that it is also impossibly present.”

In 1996, the High Museum chose Mann to inaugurate its Picturing the South series, an initiative designed to create new bodies of work inspired by the American South for the permanent collection. The Virginia artist returns this month with A Thousand Crossings, in which her large-format, black-and-white photography again focuses on her native region.

A Thousand Crossings looks at how Mann’s relationship with the land has shaped her work and how the legacy of the South — as homeland and graveyard, refuge and battleground — continues to inform America’s identity. The exhibition, curated by the National Gallery of Art in Washington, D.C., and the High’s Donald and Marilyn Keough Family Curator of Photography, Sarah Kennel, ends its two-year world tour in Atlanta. Mann, now 68 and one of America’s most renowned photographers, is well into her fourth decade of experimental work that looks at existence, memory, desire, death, the bonds of family and nature’s indifference to human endeavor.

The concurrent two-month show at Jackson Fine Art looks at her 2016 series Remembered Light and includes select Southern landscapes from throughout her career. The Remembered Light photographs, taken at the Virginia studio of painter Cy Twombly (1928–2011), become a quiet rumination on what a life leaves behind. Mann and Twombly were longtime friends.

Atlanta photographer Charlie Watts uses her camera to chase images that are not of this world but that act as steppingstones to the unknown — just past the peripheral edge of consciousness. Her goal is to create images that provide a visual path away from the mundane and toward the fantastical.

She’s worked on her Hortophilia series — shot in forests and featuring some nudity — for five years and calls the journey “incredibly important,” saying that “making these images feels like showing little parts of my soul.”

The photographs, she says on her website, “tap into our deepest spiritual desires to interact with and take care of the environment around us. The images draw on myths, fairy tales, folklore and faiths to explore the essential kinship of people and the natural world.” It’s a little odd to have a retrospective for someone who only just turned 39. But Virgil Abloh isn’t just anyone. The middle-class son of Ghanaian immigrants studied engineering at the University of Wisconsin and architecture at Chicago’s Illinois Institute of Technology. He began his career making T-shirts, earning a place in the culture of streetwear, hip-hop and sneaker heads. He’s worked as Kanye West’s creative director, has his own fashion line called Off-White, is a DJ and a visual imagineer for hire and has collaborated with Nike, IKEA and the Red Cross, among others. In 2018, he became creative director of designer Louis Vuitton’s menswear line. The High’s Figures of Speech, which originated at the Museum of Contemporary Art Chicago, is the first museum exhibition devoted to Abloh’s multidisciplinary work. It looks at his creative process, his collaborations and his pioneering discipline, which connects visual artists, musicians, graphic designers, fashion designers and architects. Viewers are promised an in-depth look at defining highlights of Abloh’s career to date, including his recent Louis Vuitton designs, video documentation of his fashion shows, and his distinctive furniture and graphic designs.

This retrospective of Abloh’s work, the New York Times said in reviewing the show in Chicago, “turns on unanticipated juxtapositions — visual, sociopolitical and even structural,” and “it asks how a museum — by practice, a static institution — can capture and convey the work of someone who moves quickly, has prodigious output and who isn’t nearly as preoccupied with what he did yesterday as what he might do tomorrow.”

Other artists + shows to watch

Atlanta Celebrates Photography. Throughout October. The 21st-annual festival features more than 100 free events and exhibitions at multiple venues, including the group show APG > ATL: Airport 2019, 30 photographs chosen through a national call and on view in the main atrium at Hartsfield-Jackson Atlanta International Airport (through November 6).

Sonya Yong James. Loud Magic show, her first solo gallery exhibition, continues through October 19 at Whitespace. One Hundred Blossoms and the Sweetest Scent is at Zuckerman Museum of Art through January 3, 2020.

MODA. Design of Dissent (October 13–February 2, 2020) looks at graphic work that addresses social and political concerns in the United States and around the world. The work of more than 70 designers, including the prolific Fang Chen and feminist activist artists the Guerrilla Girls, is included.

Emory University. Framing Shadows: Portraits of Nannies From the Robert Langmuir African American Photograph Collection through January 5 at the Woodruff Library. The African American women in this show are as fascinating as the Mona Lisa and, arguably, even more enigmatic.

Alex Harris. With Our Strange New Land ( November 29–May 3, 2020), the North Carolina photographer continues the High Museum’s Picturing the South series with a look at independent film sets in the South.

Yoyo Ferro. The December 7 solo exhibition Color-Full by the Atlanta muralist (and more) will feature paintings, works on paper, new prints, T-shirts, pins and stickers, with items for sale. The Plaza at Ponce City Market, where it meets the Atlanta BeltLine. 6–11 p.m.