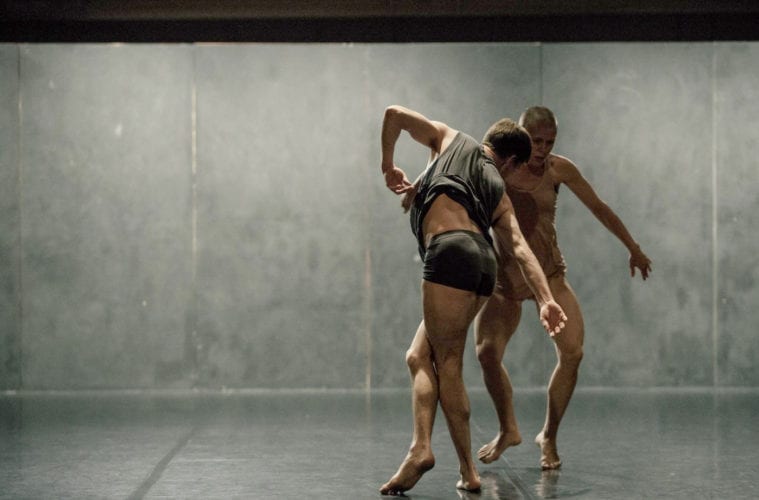 Emory Dance brings duo together for another piece apart

On a bare, shadowy stage, a man and a woman move in silence, save sounds of their breathing, their bodies making contact and their feet shuffling and pivoting on a Marley floor. Jennifer Nugent and Paul Matteson move through another piece apart, a duet they will perform this Saturday at 7:30 p.m. and Sunday at 2:00 p.m. in the Dance Studio of Emory University’s Schwartz Center for Performing Arts.

In a video excerpt of the duet, the performers’ facings shift as they brush their legs and swing their arms, cutting silken arcs through the air. They fold into one another, limbs crossing, then alternately test each other’s support — moment-to-moment revealing facets of a relationship and reflecting on “a history of fractured togetherness.” Their rapport and facility suggest they could form infinite configurations, yet their choices are purposeful, detailed and intricate.

Nugent and Matteson have choreographed duets together since 2006, and both artists share histories in New York as members of David Dorfman Dance followed by about six years with Bill T. Jones/Arnie Zane Company. Nugent has received the New York Dance and Performance “Bessie” Award for her work with Dorfman, and Matteson earned a Bessie for his body of work.

They’ve caught the eye of New York critic Deborah Jowitt, who wrote in The Village Voice, “Their resilience, their ability to duplicate moves when they dance side by side, and the speed with which each can accommodate to the other’s new ideas bespeak understanding and respect.”

Said Jowitt, “Nugent is a strong, long-bodied space-eater who moves with a lavish plasticity. Matteson — slim, loose and wily — can articulate a shoulder, a hip, his head in innumerable slippery ways. He’s syrup; she’s honey.”

Nugent now teaches at Sarah Lawrence College and in New York City. Matteson teaches at the University of the Arts in Philadelphia — a separation that’s likely to make their proximity onstage all the more compelling.

Here’s a quick look at another piece apart.