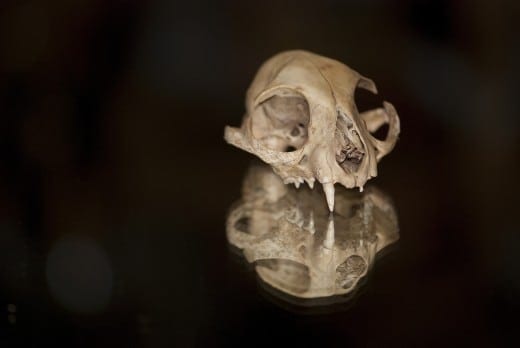 “What Once Was,” at Sandler Hudson Gallery through December 1, offers a bittersweet shot of nostalgia. Lisa Tuttle, Marshall Davis and Mario Petrirena all utilize the re-imagining of archival-like imagery to explore our fascination with the past and its photographic documentation. Whether it’s remixed, deconstructed or merely re-examined, these three artists share a penchant for reworking portrait photography to meet their individual needs.

The first work to greet the viewer is Lisa Tuttle’s “Dark Thought,” a mixed-media print on wood that sets the tone for the exhibition. In this piece, a vintage photograph of an elderly woman in Victorian garb is overlaid with the words from “The Guest House,” a poem by the Sufi mystic Rumi in which there is an entreaty to entertain all dark thoughts and emotions that may arise because they may be the necessary predecessors to new insights, “clearing you out for some new delight.”

Gothic undertones aside, other works in Tuttle’s series seem to echo this sentiment. Sorrows, laments and nostalgia are a necessary part of the human condition, part of the examination of the complexities that arise from this very messy business of living, loving and dying. A vintage female portrait is often the main subject of a Tuttle print. She adds elements from nature and swaths of autumnal colors to create saturated images, often tinged with a hint of melancholy, as in “Winter Thought” and “Woman With Trees.” In others, recitations in French overlie images of Baroque chairs, creating a stylistic mise en scene for the hopeless romantic.

Marshall Davis’ photographic series suggest a strange nostalgia for “realness.” His works offer a solitary item, resting on a reflective black surface (and thereby doubling its presence), for our scrutiny. Although the objects range from the natural (bones, skulls and animal parts) to the artificial (bits of metal, glass and plastic), their treatment is the same. The portraits of the organic items seem simple enough; we are left to enjoy the beautiful, natural designs of these chosen objects: the intricacies of a turtle carapace or cat skull or the subtle geometry of a snake rattle. But the inclusion of the inorganic items adds another dimension. In “Jelly 1,” an ersatz spidery bit of metal merely resembles the item suggested in the title; there is no jellyfish, just a found object that superficially evokes one, and quite beautifully. The same is true of “Weave,” in which metal strands evoke a plait of hair or fabric.

It is in these photographs that Davis explores the concept of inquisition, particularly, what is the quality of a subject that makes for a strong, even iconic, composition? Yes, the rattle of a snake is visually engaging, but what of the humble toilet plunger handle? Through Davis’ lens this item is captured with the same sober clarity that reveals the everyday object’s own translucent mimicry of the organic, its own play of light.

Equally evocative is the photograph titled “Titties,” in which a vintage synthetic breast — perhaps part of a mannequin? — is the solitary object reflected in salacious duplicate. It is the reserved color palette, the exploration of “realness,” that makes all these images so rich and atmospheric while retaining a strict sense of portraiture. The subjects are like specimens of taxonomy in some museum of (un)natural history, a kind of strange reliquary.

Mario Petrirena’s series of photographic collages add to the feeling of nostalgia and examination. Limiting himself to a fairly neutral palette, he layers, cuts and assembles old black-and-white photographs on board. Unlike some of Petrirena’s past political works, these pieces seem to be of a more personal nature and appear as meditations on life, love and, especially, marriage. Mario Petrirena's "The Inevitability of the Fading"

Several of the collages rework images that appear to have come from the same series of wedding photographs. One can make out a couple, a white gown, the backdrop of a reception and other wedding trappings. What is significant is that the family photos are carefully deconstructed to remove many of the faces; they appear as anonymous figures in a set-like environment, highlighting the artificiality of the act of marriage yet also rendering it with a universal sense of sentimentality. The couple could be your parents, uncles or aunts, your family history abstracted through the prism of memory.

The reworking of the photographs into arcs, spheres and other curvilinear shapes lends them almost an architectural presence. The depth of space created in the negative areas gives them weight and presence. This is most successful in the largest piece, “The Inevitability of the Fading,” wherein the theme of marriage is continued. Here, the juxtaposition of a color portrait of a young woman with the black-and-white wedding party scenes reinforces the sentiment of its title. And who among us can resist the nostalgic pull of what once was and can never be again?