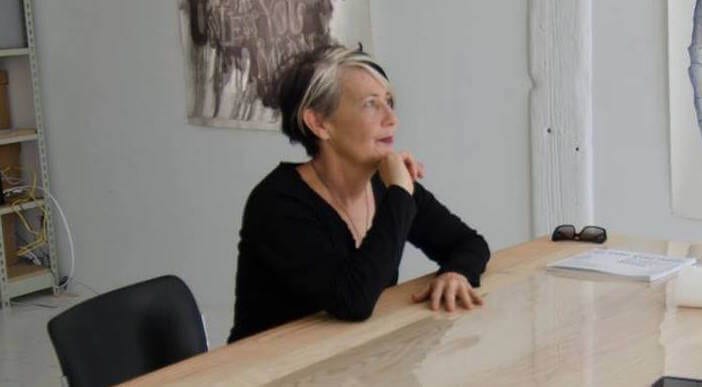 A discussion of power: a conversation with Marlene McCarty

Nearly a year ago Hank Willis Thomas told me in a phone conversation that “all art is political.” This was before the election, and his efforts both in his own work and especially within his artist-run super-PAC For Freedoms were focused on getting citizens involved. He was and is right. Maybe Carl Swanson said it best in The Vulture in April, “Each Trump proclamation has seemed to inspire a new round of agitation and action.”

If there’s a gold standard within the art world of an artist who has consistently stayed ahead of the curve and successfully activated citizens to become involved as well as raised awareness for the marginalized, it’s Marlene McCarty. Her work with Gran Fury brought the AIDS epidemic to the nation’s attention. When the group disbanded in the late 90s, McCarty produced a series of chilling large-scale portraits of girls on the brink of womanhood who had killed their mothers — Murder Girls. She then went on to produce a series that “serves as a fascinating point of entry to the work of an artist defined by canny aesthetic prescience and lifelong political activism,” according to Art in America — another series of large-scale portraits, this time sexually explicit, depicting the union of man and beast.

Last night McCarty arrived to deliver a lecture as part of Georgia State University’s Welch Visiting Artist and Scholar Series. We spoke by phone to discuss her work, her ethos and the political climate today. This is an excerpt of our conversation.

ArtsATL: It pains me to even ask you this, but — is it disturbing to you that so many of the social issues that you have addressed directly in your work since the AIDS crisis in the 90s are somehow even more culturally relevant than they were before, instead of being resolved in some way? 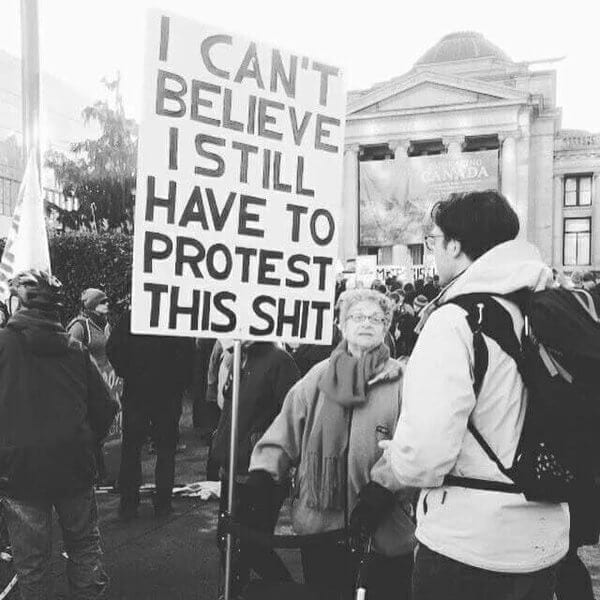 Marlene McCarty: [Laughs] It’s funny you say that, because I address that directly in the lecture I’ll be giving. In my presentation, I’ve included a picture of a woman at the Women’s March in D.C. . . . it’s an older woman holding up a large scrawled sign that says, “I can’t believe I still have to protest this shit.” She really summed it up. Yes, it’s really frustrating.

There’s a pendulum swing we have to deal with. This might be my wishful thinking, but I do think we’re in a moment where a lot of things that we had tried to deal with that had been addressed — maybe in a way covered over but still thriving underneath the everyday surface of things — are about to finally be dealt with, though, in a real way. The current administration has made it okay to talk about all this vile stuff.  It’s like a giant boil or a pimple — a huge gathering that just has to burst to get it out so we can start to heal.

I don’t know if that’s true — but it could be. The fact that we have so much racial antagonism at the moment speaks to the fact that racism has not gone away. The only way it will is if we get really honest and deal with it. Racism is a huge problem in America. It’s same with LGBT issues. Now we have to deal with it again. This time it’ll be a nasty fight, but hopefully, something will be resolved.

ArtsATL: Yes, I think a good example of a work that was ahead of its time was the Murder Girl series that you made in the 90s. I was wondering: have you had to reframe the way you talk about that body of work, or other bodies of work you’ve made, to better address what’s happening today?

McCarty: Artists talk change every time. They have some elements that are contemporary, but those change every six months. So the way I talk about my work is constantly evolving. What’s interesting is that a lot of the work has stayed relevant. There’s a resonance within the work that has tapped into something that’s still with us, even if the specifics have changed.

With Murder Girls — with that body of work the one thing I’m acutely aware of now that I wasn’t then is the fact that probably 95% of those drawings are White women. I mentioned that in the beginning and said, and I still stand by this, that I only used information from the public realm to inform that series. Everything I pulled from had been in the newspaper or public report — this was the 90s; we didn’t communicate the way we do now. I was relying on local media to speak about these things. It became clear to me that local media was much more interested in White girls who killed her mother and lives in a good part of town, as opposed to a Black woman in an economically disenfranchised part of town. Of course, there are plenty of Black Americans upper-middle class, and very affluent — but what I’m saying is that basically the pool of cases I was looking at was framed by what the media was interested in. Today I realize how telling that is.

Today it would be very different. 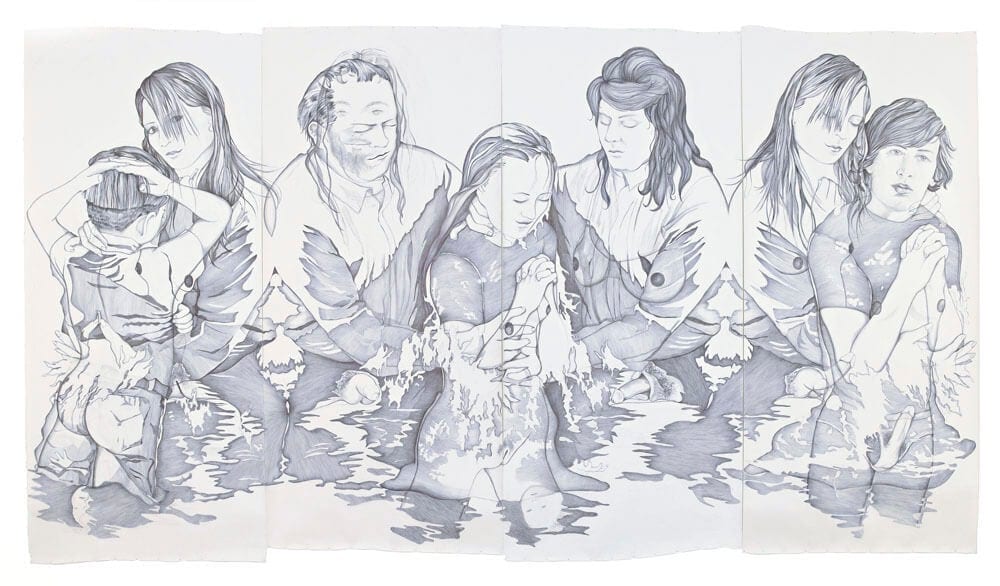 ArtsATL: What’s interesting to me in that series is that it’s not very often that you see young women simultaneously depicted as both violent and diminutive.

McCarty: Truthfully, the way I got to that work after a time [is] that I had been working with this text language on painting. I was playing with the idea of placing a very aggressive female voice and put[ting] it in a contemplative male environment. It was a play with power. But with those text-based works and even with the Murder Girls that followed, everybody kept reducing the conversation to a critique of patriarchy, when really it was a liberation of the female voice. What happens when we don’t speak how we are supposed to? I grew frustrated that the voice wasn’t being dealt with in a more complex conversation, and it threw me into another direction, to Murder Girls.

It was very simple. A friend of mine and my girlfriend read and recommended Bad Blood to me. It’s a true crime book, which I wasn’t really into. My friend wrote an essay about my text-based work, Tom, where he equated the language in the paintings with Marlene Olive, who in her desperate need for liberation in the domestic environment ended up murdering her mother. That’s what caused me to finally read the book. It was sensational and so intense. It was larger than just that instance; it was a desperate attempt for women to claim power in a society where they are constantly having power taken away from them. Was it misguided? Yes. Was it wrong? Definitely. But it was also symptomatic of a much larger issue within our society. It was the discussion of power.

I realized it must happen more often than just that instance. I did a lot of research and uncovered 42 cases of girls killing their mothers, none of which were an act of self-defense or mental instability. I took those out because what interested me were sort of normal girls living relatively typical teenage lives who just broke from the pressures of transitioning to female as determined by the world around them. These were young women who cracked under the feeling of immense oppression from the family, the domestic, the mother. Those can be volatile elements. It was from that standpoint that I realized the depiction of these girls had to be monumental. They had to be serious. They couldn’t be dismissible. The scale had to reflect the monumentality of the event. It wasn’t as simple as girls defending themselves.

ArtsATL: Are galleries still “contemplative male environments” in your opinion?

McCarty: The galleries have changed so radically. This steroid masculinism has taken over the gallery system. Now it’s all about profit and selling. I’m not seeing much in galleries that’s about a conversation. Kara Walker is an exception to that. We show in the same gallery, and her new show is quite conversational, but that’s exceptional.

ArtsATL: “Instagrammable” is a word that keeps coming up.

McCarty: I feel very alienated. I think I’ve kind of gone underground. I don’t feel like a part of the steroid capitalist gallery system, though I am represented by a gallery. I’m not a part of the commercial side of the socially conscious issues. Back in my day that was a kiss-of-death for social protest. I can’t speak to the commercialism of these causes, though I think there is something superficial about them — it’s become about the branding [of] the work instead of living.

ArtsATL: Where do you feel that you are, then?

McCarty: In 2012 I had immense losses from Hurricane Sandy and hit a point where I couldn’t pick up the pencil and continue from where I was. I started working on some things in my studio, which I have not shown. I needed some time to not worry about an exhibition. I’m still in that mode. Taking some time for myself that is outside the capitalist system.

ArtsATL: How do you foster genuine and authentic work with your students?

McCarty: It’s hard; that’s the biggest part of my work. A lot of these students — I’ve been teaching mainly undergraduates — they’re very smart and they’re in the system and they know how to make things that look like art, but . . . that is my one thing that is my moment of truth — if I look at a student’s work and don’t feel a drop of anything authentic as relates to them — I call them on it. This is consistently reflected in my evaluations. They keep saying in their reviews that their class was great but “so intense.” I don’t let them get away with bullshit.

It’s so important to be in touch with what makes you resonate with the world. The things that are important to my students don’t necessarily resonate with me. I want them to make me scared! Make me unsure instead of making something they think I want to see. On my end, it’s then my responsibility to bond with each student on a gut level. These are the people who are going to be looking at making art and getting involved in this world in the future. We need to develop these sensitivities in them early on.