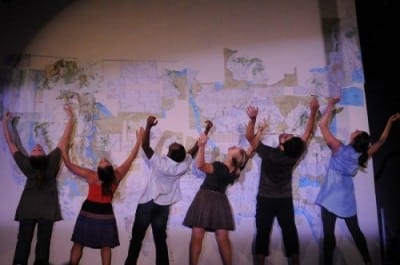 Blake Beckham, a gutsy young choreographer, made her mark on the Atlanta dance map last Saturday at Eyedrum Art and Music Gallery with “American Muscle.” The dance theater performance, in collaboration with jazz composer Stephen Wood and lighting designer Malina Rodriguez, was packed with ideas and text; Beckham raised more questions than she answered. 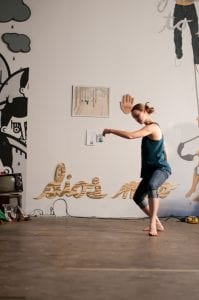 But as she grappled with her relationship to her country — its ideals, attitudes and power — Beckham stretched a facile, articulate movement vocabulary that is anchored in strength, musically attuned and, at times, softly expressive.

“American Muscle” was the third piece Beckham (at left) has shown at Eyedrum, which was packed Saturday with a supportive audience. It’s the second one the Emory University graduate has shown at the alternative art space since receiving her MFA from Ohio State University in 2005. (Photos by Bobbi Jo Brooks.)

The work, lasting just under an hour, was in two parts. The first was staged in a corner of the front gallery under Rodriguez’s 50-bulb chandelier, representing the 50 states. The second was performed in the back-room performance space on a large wrestling mat flanked by the Stephen Wood ensemble and a wall covered with road maps that together formed a giant map of the United States. 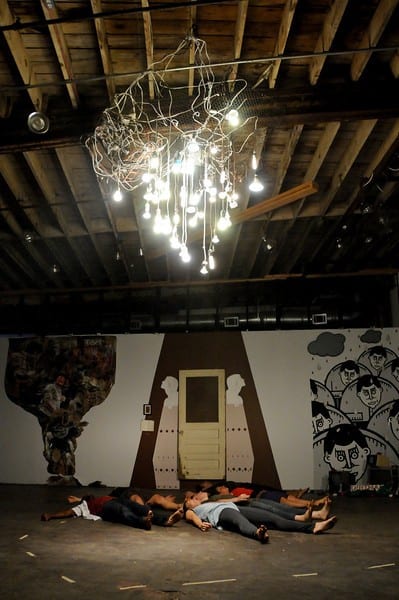 Six accomplished contemporary dancers, with CORE’s Alex Abarca and Corian Ellisor as standouts, infused the work with depth, power and personal commitment. Like sports teams, they confronted each other, borrowing from football and wrestling, throwing their weight around with broad, open stances. They crashed their chests together and played out the tugs, pressures and clashes of social, perhaps political, conflict. Huddled in a rugby scrum, opposing forces immobilized the group. Aggressive pushing and directionless shuffling evolved into duets where dancers exchanged support, one lifting the other. A cluster of five lifted Ellen Lyle overhead and supported her as she stood with her feet against the U.S. map, her body held out horizontally as if she defied gravity. In an almost transcendent final moment, Lyle silently walked across the map in slow motion, indicating a journey that’s just begun. 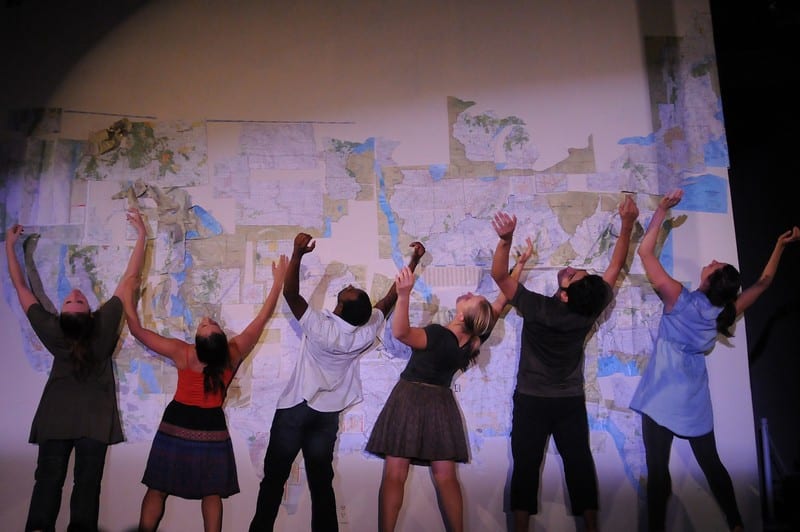 The entire production’s lighting, music and dancing seemed effortlessly integrated, and the dancers inspired. As an independent artist riding on the support of dedicated collaborators, driven toward further inquiry and exploration, Blake Beckham is a choreographer to watch.