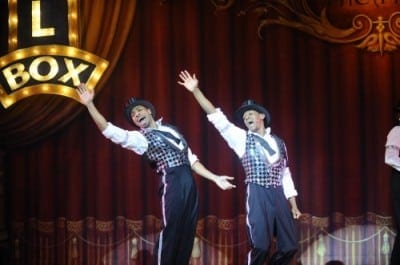 “Twist” was a long time coming to the Alliance Theatre — a project that Grammy Award-winning composer Tena Clark conceived nearly two decades ago but needed Emmy-winning choreographer Debbie Allen to bring home. It’s a grandiose musical affair, filled to the rim with song-and-dance numbers built for the range of an ensemble cast.

With its ambitions of making it to Broadway, “Twist” could be forgiven for trying a little too hard to please. But that was the feeling after experiencing the two-and-a-half-hour extravaganza at Thursday’s “media night” performance. This was after Wednesday’s “red carpet” performance, which followed a couple of weeks of “preview” performances.

“Twist” has something for everyone, and maybe that’s the problem.

In transporting the Dickens novel “Oliver Twist” from 1850 London to 1928 New Orleans, Clark brought along a lot of baggage. Co-composing with Gary Prim and working from William F. Brown’s book, she must have felt the need to do more than update the story and build on the magic of the 1960s’ Tony-winning blockbuster “Oliver!”

Consider for a moment that “Twist” features 25 original musical numbers — 17 in the first act alone — compared to “Oliver!’s” 16, and you start to get an inkling of “musical overload.” Some are blessed with Allen’s choreography, sometimes with exquisite tap dancing, and all are set to a raucous house orchestra. Others come so fast and furious that they almost run into one another. And for a team that embraces its New Orleans ties, Allen and Clark only hint at the Jazz Age music of the city and frequently embrace more conventional musical numbers. Throw in some overly extended subplots, and tedium creeps in. For a brief moment, intermission felt like an exit cue.

The plot follows Dickens’ familiar story of an orphaned boy who finds himself at the center of musical theater’s most complicated custody battle — among the upper and lower crusts and those in between. Twist himself (Alaman Diadhiou) is the bastard son of promising African-American tap dancer Roosevelt King (Jared Grimes) and his white lover, the heiress Angela (Aijia Lise), both of whom die before their time. (Read about tap star Jared Grimes here.)

Passed from an orphanage to a funeral home to a dodgy juke joint to the mansion of a wealthy lawyer and seemingly back again, Twist is constantly in search of a home. The boy’s racial identity crisis is magnified, as he explains in the touching “A Color No One Likes.” The 10-year-old Alaman (at left) makes his singing debut here and it shows, although his inherent charm helps compensate for his lack of vocal proficiency.

Vocally, the heavy lifting is deftly done by Matthew Johnson and Olivia-Diane Joseph, who play the hustler Boston and his blues-singing girlfriend Della. Both have ties to Twist that take awhile to reveal, but not before a series of solos and duets begin to overtake the show.

While this shift robs “Twist” of some of its choreographic energy, it allows Johnson and Joseph to shine. Boston’s “On My Knee,” a counterpoint to Della’s “Just When I Had It All,” suggests that this schemer might not be just another Bill Sykes, a sadistic villain from Dickens’ novel. Combined, Boston and Della provide “Twist” with its musical soul.

“Twist” is also blessed with pitch-perfect ambience from set designer Todd Rosenthal and lighting designer Rick Belzer. Honoring the timeless French Quarter, Rosenthal fills the stage with wrought-iron catwalks that alternate as balconies and bridges. Belzer floods the scenes with moody blues and purples, with occasional shafts of light that underscore the existential plight of the characters.

Allen’s choreography, which has graced everything from “Fame” to the Academy Awards ceremonies, mixes in old-school moves with more modern sensibilities, and she strikes a vibrant middle ground in a voodoo-tinged nightmare instrumental. Here the orchestra goes full blast and the dancers shake, rattle, roll and spring about Twist as he is forced to sleep overnight next to a coffin. Never has death felt so alive.

If only the sound mixing possessed such complexity — despite being heavily miked, the lead singers often had to battle the band to be heard.

By the musical’s abrupt but familiar ending, young Twist has fulfilled his modest ambition of finding a home. If this powerhouse team of Debbie Allen and Tena Clark would consider scaling back their own ambitions a little, they might just find the home for “Twist” that they’ve been looking for.