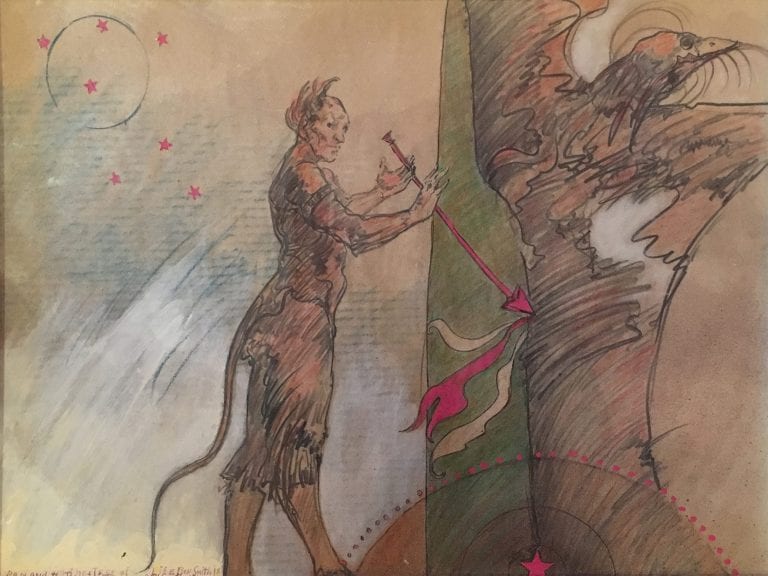 Ben Smith’s Pan and the Tree of Life is one of the works at Spalding Nix Fine Art Gallery's anniversary show this month, one show in a busy, alchemic November. (All works courtesy the artists/Atlanta galleries)

Atlanta-based curator Dorothy Moye has long been noted for her exhibitions combining Atlanta artists with noted national figures. Transformers: Artistic Alchemy, at the Dalton Gallery of Agnes Scott College through December 8, continues this tradition, with a signature work by Chakaia Booker, whose sculptures transform tire treads into interwoven tangles that are metaphors for issues of globalization, gender and economic difference. In this exhibition, the visual strategies of the entwined bicycle tires of Booker’s Lyrical Gestures in Space interact intriguingly with works by two Atlanta artists: Gregor Turk makes very different use of bicycle inner tubes and valves as coverings for a globe and an obelisk, and Elyse Defoor’s potently arranged stack of black leather belts offers a structurally similar but symbolically different take on seeming disarray.

Moye arranges visual rhymes throughout the exhibition, which features 15 artists who use repurposed material to convey political, social or psychological messages. The most spectacular and powerful is probably Pam Longobardi’s Flags of Lesvos (anamnesis), a wall piece composed of discarded life vests worn by refugees who made the hazardous crossing to the Greek island. The Atlanta artist’s work is displayed opposite the work of another internationally recognized creator, Naomi Wanjiku Gakunga, whose reuse of flattened metal cans alludes to the use of such recycled objects as roofing material that allows for the collection of rainfall.

The exhibition is filled with surprises and delights, including Amy Orr’s World Map composed of credit cards, but here I can single out only one other piece, Georgia State University professor Joe Peragine’s delectably perverse Four Seasons: Winter, a combination of an LED-light reindeer lawn ornament with a taxidermied deer head wearing a holiday collar, posed atop a cardboard and plaster replica of a tree stump. The combined references to museum dioramas and American sentimentality at Christmastime open up huge areas of possible conversation.

I offer apologies for the short notice for Booker’s talk, which will be presented free of charge on Wednesday, November 14, at 7 p.m. in Agnes Scott’s Frannie Graves Auditorium in Campbell Hall. Moye is giving a curator’s tour of the exhibition on Saturday, November 17, at 10:45 a.m. for the Southeast Fiber Arts Alliance ($3 for non-members), and a closing reception with artists’ talks will be held free of charge on December 2 from 4 to 6 p.m. in collaboration with the Decatur Arts Alliance.

Another use of repurposed materials, in this case living plants, can be found in one of my favorite pieces currently on display in Atlanta, Cynthia Farnell’s collaboration with Frank Poor on a sculpture based on the appearance of a Wardian case, a Victorian invention used to transport tropical plants to Britain by ship.

The plants in question are crinum lilies, from which Farnell has also used leaves to produce the monotypes on the walls of her Materia Medica exhibition, at Poem 88 through December 1.  The plants, grown by Farnell’s pharmacologist father, contain an alkaloid approved for use in the United States for the treatment of neurodegenerative conditions. Farnell will deliver an artist’s talk on Saturday, November 17, at 2 p.m. in the gallery.

I am constantly reminded of the remarkable range, stylistically and geographically, of the artwork being displayed in Atlanta, but the lesson was brought home recently by the simultaneous opening of two anniversary exhibitions that are at spectacularly different ends of the aesthetic spectrum.

Spalding Nix Fine Art is celebrating its 15th anniversary with its typical mix of the elegantly conservative and the transgressively adventurous. Ben Smith’s exquisite drawings have always been a bit of both, frequently exhibiting a wicked wit and inventiveness that have led some first-time viewers to suppose this must be the work of some talented creator 50 years younger than Smith. I am particularly charmed by his transformations of Greco-Roman mythology in Divination and Pan and the Tree of Life, though these are by no means the most outrageous pieces in this exhibition, which combines new work by Heather Lancaster and Raymond Kaskey with small works by the gallery’s 30 or so other artists. The show closes January 18.

Blue Mark Studios is playing host through January 6 to the 10th anniversary of Steel Wheels, a collaborative effort that began as a documentation of graffiti on railway and subway cars and expanded into a combination of documentary photography and model railroading, in which the original graffiti artists produced miniature versions of their legendary tags on scale models of the cars on which they wrote (and in many cases still write) them. There is now a vast range of graffiti history in the Steel Wheels repository, and this realization led curator Joe Dreher to bring the anniversary exhibition to Atlanta in collaboration with Emory University’s Stuart A. Rose Library. As his contribution to the exhibition, Dreher has turned the stairway to the exhibition into a mock New York subway entrance. Yes, the show does include an actually functioning model railroad of graffiti-bedecked freight cars, along with a carefully replicated miniature subway car encased in a vitrine like the art object that it is.

Since I began this month’s column with a glancing reference to the secular side of the Christmas holidays with Joe Peragine’s strange reindeer, I’ll close by mentioning that Pryor Fine Art is currently showing (at least through the end of November) new work by Dusty Griffith, whose beeswax-and-plexi panels have long represented a contemplative, if not outright mystical, side of Christianity. Some of the new pieces incorporate collage elements and extend their range to the quiet mysteries of human personality.