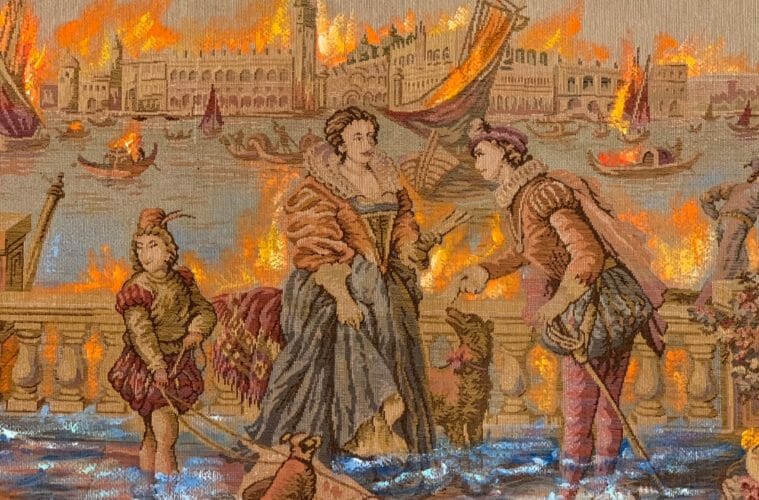 The other day, I was fortunate enough to attend a three-hour art exhibition staged in a public place, but nevertheless presented under conditions in which it was easier to ask forgiveness than to get permission. Because of the semi-underground nature of that wonderfully experimental show, I still feel uncomfortable writing about it; this is not the case with Employees of the Month, the current show at 378 Gallery in Candler Park. The artists in this show have been staging borderline events of one sort or another for four decades and gallery manager Tom Zarrilli has been up to his wry transgressions for just as long. About this, more in a moment.

It also set me to thinking about what changes, and what continues, in the Atlanta art scene. When Cullum’s Notebook was created some years ago, my assignment was to report briefly on a diverse range of noteworthy exhibitions that would, for the most part, not be written about otherwise. This has gotten more difficult for a variety of reasons. 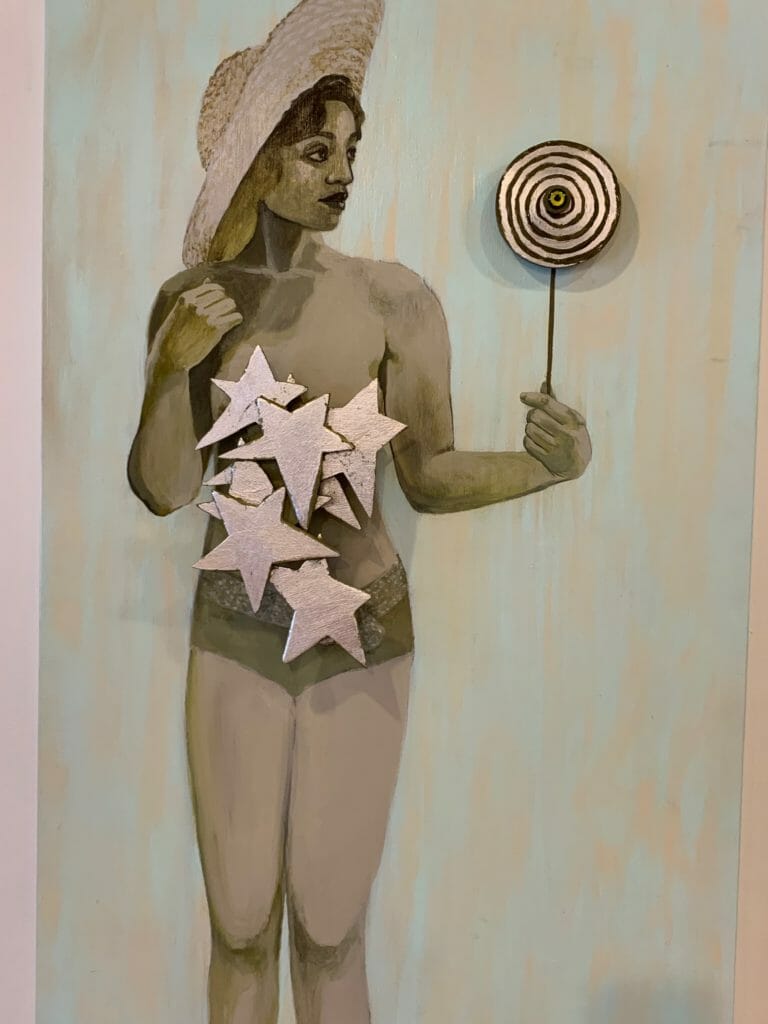 Shinault’s “Shimmer” is a visual metaphor for women’s place in society.

One is that rising rents and alteration in available space for nonprofits and for-profit galleries have resulted in a physically scattered gallery scene that reflects a complex social and generational divide. The task of keeping up with all of it has become ever more daunting as the range of art spaces reflects that complexity. There are a growing number of spaces in which a wide variety of artists can exhibit, but almost all of them have self-selecting small audiences. Many artists experience a disconnect with the very audiences that most need to see them, in part due to the difficulty of getting audiences to visit parts of the city they find unfamiliar or inconvenient to locate.

It thus continues to be true that emerging artists in Atlanta can spend their entire careers emerging, as the then-editor of Art Papers Xenia Zed said in 1985. While there are venues in which a wide variety of audiences view art, and venues in which various sub-groupings of artists exhibit, by and large they are not the same spaces. A substantial number of local artists remain known quantities for decades without ever maintaining gallery representation to keep them visible beyond a niche audience. The scene grows and changes, and if emerging artists complain of limited audience access, so do mid-career ones and beyond.

That being said, 378 Gallery has done its best to bridge generational gaps, even though it has leaned toward exhibitions by artists whose work has remained in a succession of small venues for decades. Gallery director Zarrilli, in the context of the four-person show of gallery workers sardonically titled Employees of the Month, has chosen to give himself a pandemic-delayed 70th birthday “non-immersive retrospective” that collects his work from a variety of alternative-space shows of past years, some of which stirred the brief flurry of excitement that usually is all that such exhibitions ever manage to create in an art world whose focus is elsewhere.

Zarrilli is amusingly self-deprecatory even while compiling an impressive body of work from childhood onward. Regardless of what you make of these often provocative, and always intelligent, collages and wryly serious cat paintings, they are richly deserving of close consideration. Taken collectively as a reflection of Zarrilli’s multilayered interests, they are an impressive achievement. 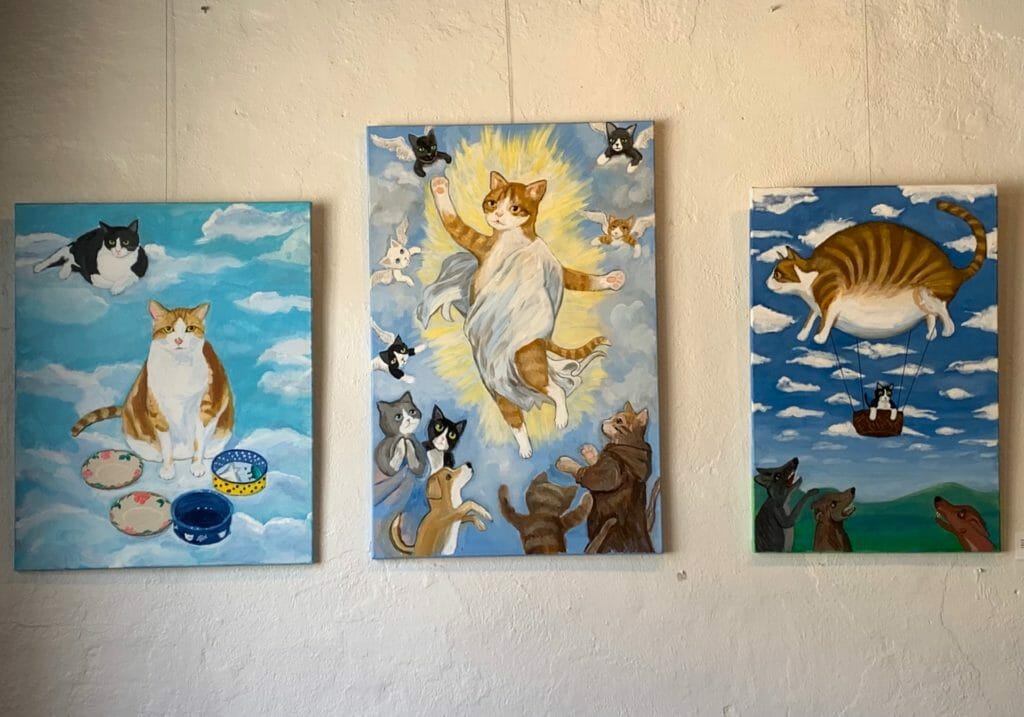 Tom Zarrilli’s cat paintings reflect the artist’s wry seriousness in this retrospective of his career.

The other three “employees” bring their own striking contributions to the mix. Lisa Shinault is already known for her life-size figure paintings with attachable costumes, like giant painterly versions of paper dolls. Here she introduces a series of broken plates repaired with kintsugi, the Japanese technique of reparation of objects with gold. These evocative portraits of women, laced with bright golden lines holding the shattered pieces together, create a visual metaphor that sums up Shinault’s decades-long depiction of “difficult women” mutilated by their conditions and place in society.

Clare Butler has long been famous as Lady Clare from the Now Explosion’s 1980s bridge between gay and straight audiences on the music and performance scene with their go-go dancers RuPaul and the U-Hauls. Now known as a visual artist, she is represented here by her embroidered icons for her personal “Modern-Day Saints” — the philanthropic Dolly Parton, voting activist Stacey Abrams and legendary ex-presidential couple Jimmy and Rosalynn Carter. 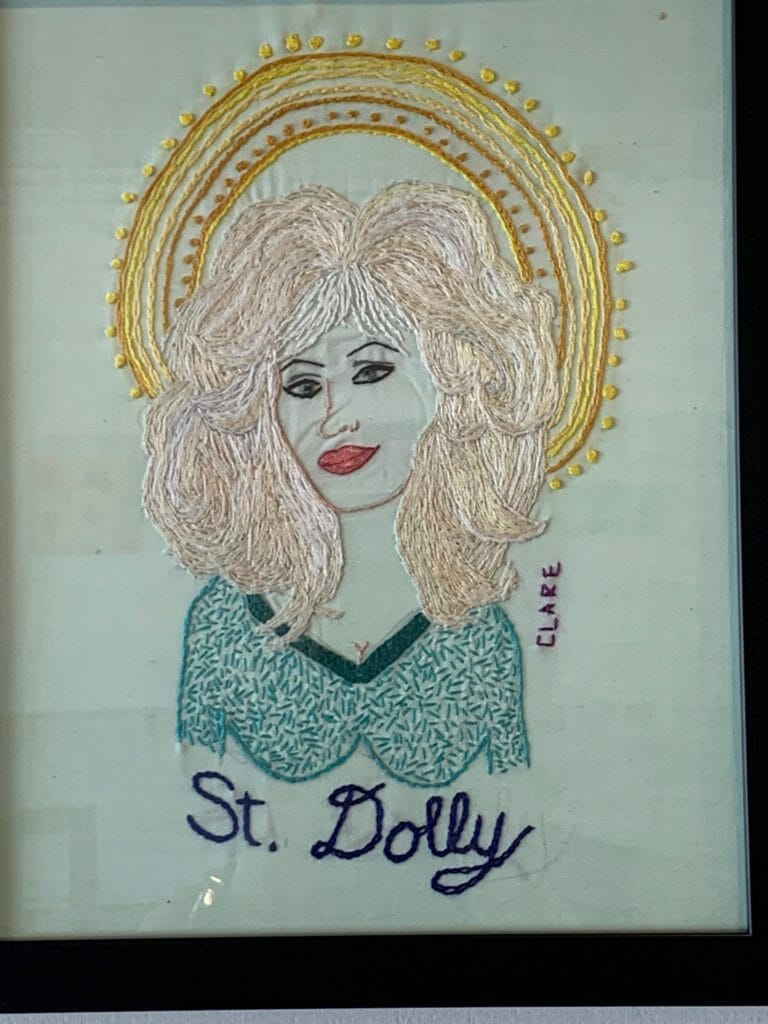 Zarrilli’s wife Cindy Zarrilli rounds out the exhibition with a combination of flower paintings and an altered found object that is in many ways the thematic star of the show. “Venice Is Burning” is a thrift-store-find tapestry portrayal of a fantasy Venice, on which she has painted flames engulfing the city while the heedless citizenry wades happily through the rising waters from the lagoon.

In a year in which mainland Italy has shared in the unparalleled threat from wildfires that have spread across large parts of Europe, this portrayal of a city already immersed annually in the “acqua alta” is also an allegory for a world determined to carry on business as usual even in the midst of undeniable environmental catastrophes. It is an apt follow-up to the theme of One Earth/One Chance II that 378’s July show presented by the Women’s Caucus for Art.

Employees of the Month closes August 28. The gallery is open Friday and Saturday from 1-6 p.m. and by appointment. Masks are required inside the gallery, and attendance inside the gallery at any one time will be limited in number while viewing the art. Socializing is encouraged outside on the reception patio.