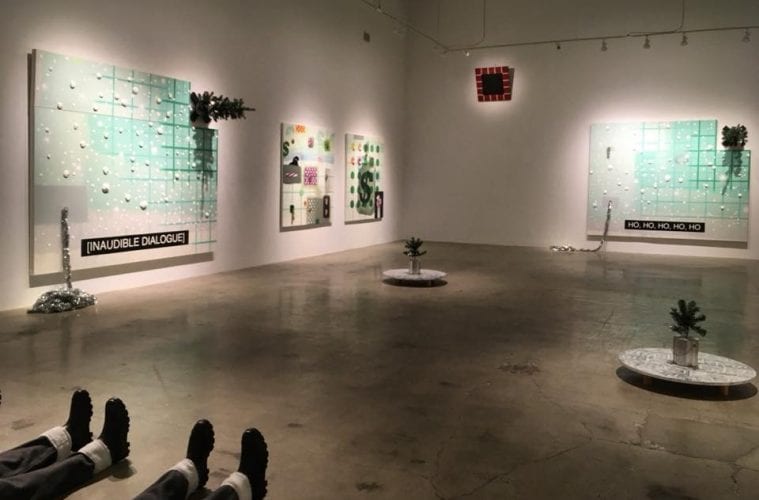 Even though each of us brings a particular way of seeing to our encounter with visual art, for much of the work typically exhibited in Atlanta, what you see is what you get. In other words, you can analyze the composition, contemplate the particular use of color, consider the associations stirred by the subject matter, but in the end, what you have is something abstract with no meaning beyond itself, or something representational that’s firmly anchored in the world we know or the world we can imagine.

Less often, we have exhibitions like Craig Drennen’s BANDIT, at MOCA-GA through January 27, in which the literal references to Christmas kitsch, Shakespeare’s Timon of Athens, closed-caption broadcasting and a variety of other things mean that the most comprehensive review couldn’t begin to capture it. The full implications of the work depend on more information than any of us are likely to have, but the visual qualities are intriguing enough to keep us engaged with the mysteries.

I bring this up because I was especially intrigued by the black square with sixteen red squares arranged around its rim, a representation of the chimney down which Santa climbs to set the mechanisms of gift-giving in motion that the rest of the exhibition pursues with tinsel, fake trees and symbolic dollar signs. The painting happens to be hung in a similar position to Kazimir Malevich’s Black Square, the 1915 painting that was intended by the artist to supplant religious icons and representational painting in general. It was a hopeful but ultimately hopeless symbol with which to bring about a metaphysical and physical revolution, and Drennen’s point (one of them) is that the expectations encoded in the annual festival of trees, tinsel and extravagant exchange of gifts is another failed project. The whole show is a major, not entirely successful, extension of Drennen’s meditations on the deeper meaning of failure.

I make this point because I want to focus attention on Robert Sagerman’s Totalizations, at Marcia Wood Gallery through February 3. This suite of (seemingly) monochrome paintings is an indisputably successful body of work that seems on first encounter to be almost psychotropic in its capacity for defeating perceptual expectations; mind-bendingly beautiful, but nevertheless a recognizable type of pure abstraction. 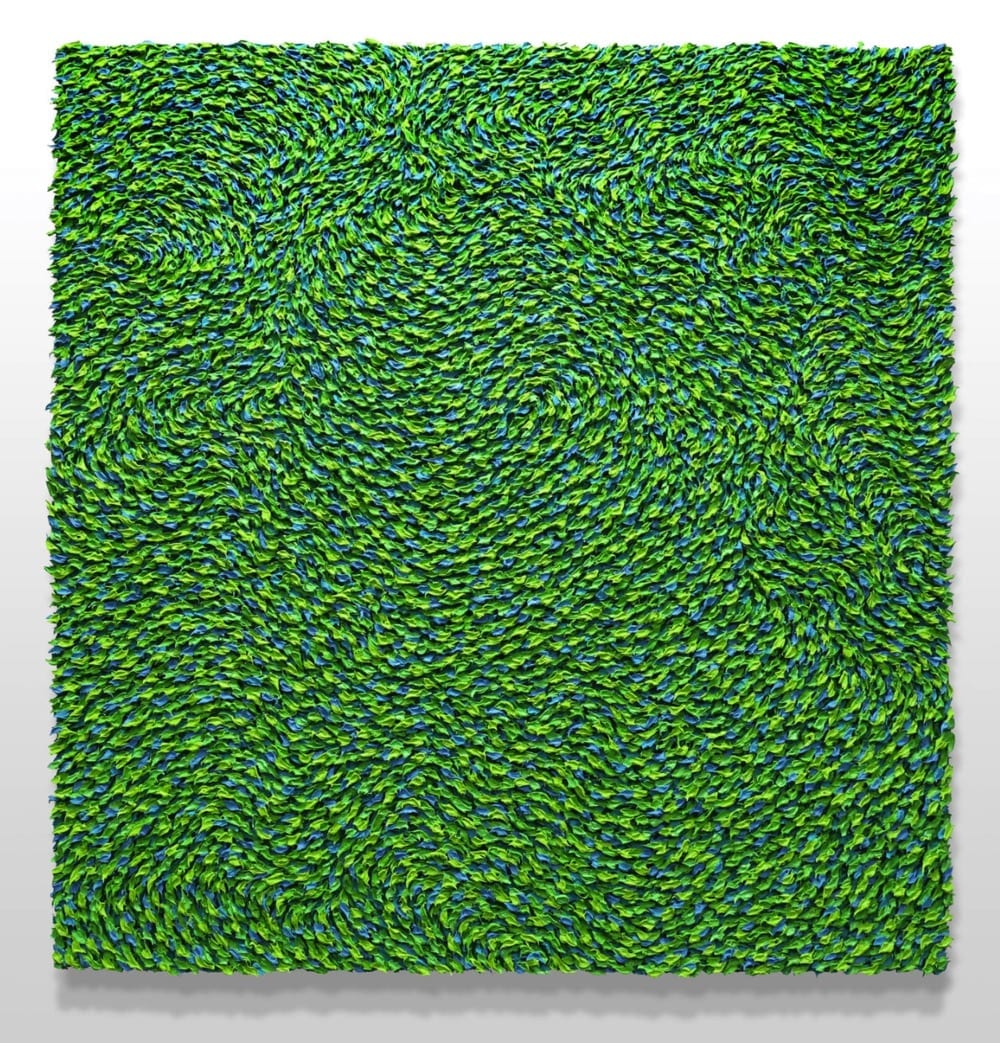 This is not at all the case. It would be enough if these large (mostly 48 by 46 inches, though one is as small as 21 by 20) oil or silicone and pigment on linen panels were only the dizzying color fields of swirling strokes of paint that greet and defeat the eye. On that level alone, they stir depths of emotion. (By the way, a closer look at a work like 17,296 reveals that only some of these works are monochromes, and then it is a misleading word to use when describing these paintings.)

The numbers used as titles suggest that the number of distinct and separate paint strokes incorporated into the painting have a significance beyond merely covering a given area. In fact, Sagerman has long given a metaphysical significance to his way of working, although he hasn’t necessarily been certain of the always elusive meaning. The quest led him to a doctorate in Jewish mysticism, in which acts of numeration are a meditative practice as part of the reparation of the universe and its restoration to the Godhead. In more secular modes of understanding, his longing to find an adequate explanation for the activity of painting has led him to carefully reasoned statements grounded in the anthropology of Clifford Geertz. He uses, in particular, Geertz’s concept of totalization; cultures offer what feels to their participants to be comprehensive and complete visions of reality, and Sagerman’s artistic practice is meant to provide the same totalization in terms of an overwhelming visual experience (and more than that besides).

There we can leave it. Most viewers will be satisfied with the overwhelming visual experience. Others will want the whole story.