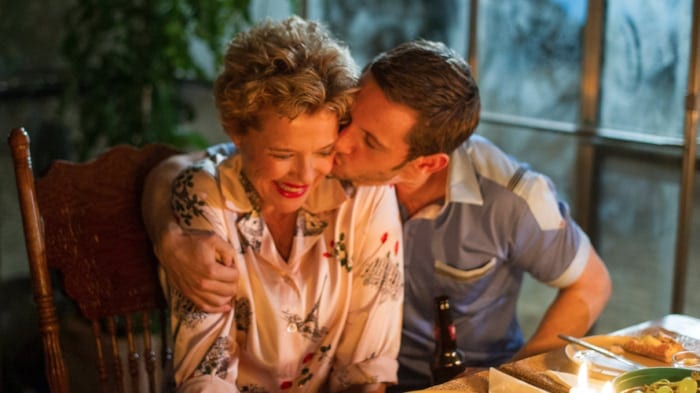 The new tenant down the hall from struggling London actor Peter Turner (Jamie Bell) has a singular personality. She guffaws with delight while moviegoers around her cringe during the chest-buster scene in Alien. She’s learning all the latest disco moves (it’s 1979). And though she’s in her mid-50s, she blithely asks, “How do you join the Royal Shakespeare Company?” She thinks she’d make a perfect Juliet.

She’s unlike anybody Peter’s ever seen — unless, that is, he’s a fan of old black-and-white Hollywood films. “Always played the tart,” his landlady explains, informing him that his new neighbor is Oscar-winning actress Gloria Grahame (Annette Bening), in town to play another tart onstage, Sadie Thompson in Rain.

Despite their 30-year age difference, the two actors embark on a relationship — also despite his bisexuality, and her fury when he suggests she might be more suitable playing Juliet’s wise old nurse instead of the ingénue.

That burst of rage gives us our first glimpse of the volatility of an old-fashioned movie star like Grahame. Never knowing what can trigger one of her warring personalities — screaming diva vs. purring sex kitten — keeps Peter on edge. It also gives the movie the energy it sometimes badly needs. And it lets Bening cut loose, reminding us how good she is, though the second half of Film Stars Don’t Die In Liverpool, when mortality creeps in, cocoons her in scenes of lethargy and illness.

Based on a memoir by the actual Turner, Film Stars gets great supporting help from Julie Walters and Kenneth Cranham as Peter’s parents, who treat Gloria as family when Peter first meets her, then welcome her into their shabby-genteel Liverpool home two years later when she’s dying of the cancer she refuses to acknowledge.

The film intercuts those sad last days with earlier scenes from Peter and Gloria’s romance. She whisks him to Los Angeles, where he meets her indulgent mother (Vanessa Redgrave) and acidic sister (Frances Barber), who fills Peter in on a particularly sordid scandal from Gloria’s past. As he flashes back and forth between time frames, director Paul McGuigan uses engaging visual tricks, having Peter open a door in his parents’ house, for instance, and walk directly into a beach-house scene from the past.

I just wish the movie as a whole showed more of this sort of imagination. It isn’t quite a biopic, or a comedy, or a romance. It edges its way around genres but never completely commits to a steady tone. (The screenplay is by Matt Greenhalgh, who with Control and Nowhere Boy has made similarly not-quite-there dramas based on the lives of public figures.)

Regardless how shaky the movie around her is, Bening is always worth watching. (If you’re one of the many who missed 20th Century Women, do yourself a favor and track it down.) Except for a whisper of a baby voice, Bening doesn’t try to impersonate the woman she’s playing. Her Grahame is alternately a force of nature or a pitiful wreck. As the character deteriorates, Bening rids herself of all vanity, though that’s been a hallmark in the years we’ve watched her onscreen.

Jamie Bell, though, is the MVP. Too long sidelined since his debut in Billy Elliot playing a working-class kid with dreams of dancing (Walters, you may recall, played his dance instructor), he’s terrific. He shows us the character’s strain as a once-spurned lover turned reluctant but devoted caretaker of a woman in a glamorous state of denial. I’m not sure he convinced me that Peter had a true soul-mate connection with Grahame; that may just be the challenge of selling a relationship that sometimes makes Peter look like an opportunistic star-bleeper. (The best scene, no surprise, is early in the film when Peter and Gloria practice their disco moves, proving that Bell hasn’t lost his dance groove in the 18 years since Elliot).

Film Stars Don’t Die in Liverpool isn’t bad, it just doesn’t seem to know the story it’s telling. Another film that also fails to meet its potential is the documentary The Final Year.

It plays as an especially ominous title, since it refers to the last 12 months of Barack Obama’s administration, when no one could imagine the mess our country was about to get into. While Susan Rice and John Kerry appear briefly, the focus is on US Ambassador to the UN Samantha Power, an empathetic live wire, and Deputy National Security Advisor Ben Rhodes, whose connection to the president is likened to a “mind meld.”

Greg Barker’s film follows them and other White House players as they deal with ISIS, climate change and especially the refugee crisis originating in Syria. “None of these things are being talked about in the United States,” Rhodes sighs. “They’re talking about Donald Trump’s twitter feed.”

It’s a sad irony of the film that, as the 2016 presidential campaign winds on in the background, absolutely no one in the Obama administration thinks for a second that Trump stands a chance. Only in retrospect do we see that much of the hard work they’re attempting to do will be ignored or aggressively reversed within a year’s time. Also in retrospect, the articulate and sincere Powers, Rhodes and Obama seem like avatars of a civilization that suddenly seems very far away. Unfortunately, The Final Year never really coheres or finds focus. It meanders and can feel self-congratulatory. It’s probably best seen by political wonks, or by anyone who wants to wallow in a bad kind of nostalgia.