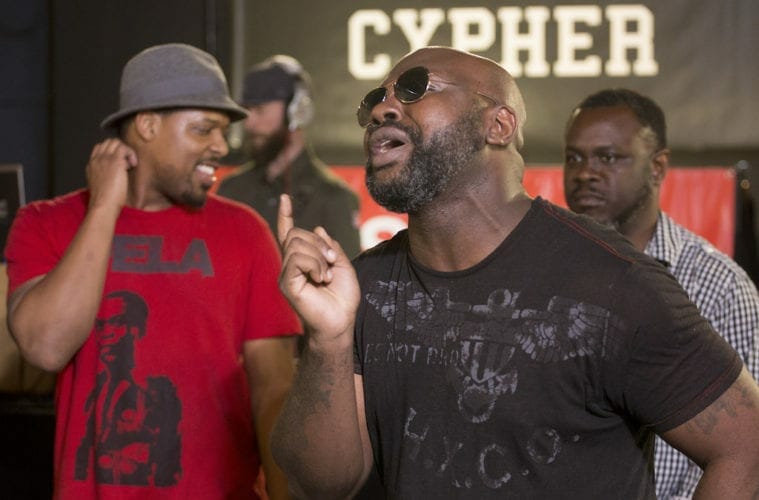 Soul Food Cypher was founded to offer safe, inclusive spaces to hone freestyle skills in rap, which grows out of the tradition of ring shouts from enslaved African Americans.

Creative in Residence, Soul Food Cypher: The bridge from ring shouts to rap

Freestyling is the cornerstone of the rap genre as we know it contemporarily. It evolved from the toasts and “dozens” recited over live beats during early hip-hop parties. Freestyling is the skill of improvising and articulating rhymes. Rappers freestyle in order to show their acumen for rap aesthetics and their command of their respective language. For the past eight years, the nonprofit Soul Food Cypher has operated a dynamic and interactive freestyle rap experience that features a live DJ. From the start, Soul Food Cypher has been dedicated to performing and teaching freestyle rapping techniques and the theory behind it. Members represent a wide array of rap aesthetics and are practitioners of hip-hop culture. Soul Food Cypher has used its platform to traverse the Atlanta area making inroads in its cultural centers including the High Museum of Art, Roswell Cultural Arts Center and the Sound Table, spreading rhymes galore and encouraging audiences to participate.

Soul Food Cypher’s inaugural cypher came the same day African American teenager Trayvon Martin was murdered in Florida. Martin’s premature death was a catalyst for the group of mostly males of varying ages to express themselves using rap in the midst of a tragedy. Since that ominous Sunday, and the majority Sunday’s since, Soul Food Cypher has met to positively reinvigorate Atlanta’s rap and hip-hop community. Members meet to express their grief and their beef with life outside the cypher. They use wordplay games germane to their organization and freestyle techniques as old as hip-hop culture. From that first cypher to the present, Soul Food Cypher has functioned as a hybridized version of a ring shout.

A ring shout is a phenomenon that recurred among enslaved Africans and African Americans throughout the American South during the period of enslavement. After working dawn to dusk, enslaved people gathered, essentially, to create African American culture under the peculiar institution. Meetings most often took place on a Sunday, sometimes under the guise of a church service. Often several enslaved people, including children, cleared away brush from behind their cabins or near a small body of water in order to gather in relative peace outside the gaze of the enslaver.

The enslaved participants gathered on many occasions, including adult initiation rites ceremonies, marriages and funerals. They formed a circle (around the newlyweds, young adults and/or newly buried) and marched thusly. Frequently, the mood of the ring shout would shift from calm to fervent, or from sad to glad. Some excited participants would leap, some shuffled, some clapped their hands. They all sang aloud harmonies and interpolated versions of the hymns, Bible tales and spirituals they had learned.

Several historical documents recount ring shout phenomena. Congo Square in New Orleans is the most notable location and many scholars name it as a birthplace of jazz. Indeed, the ring shout was a phenomena that sustained the spirits and psyche of the enslaved. It was a piece of freedom. Participating in a ring shout conjured peace among the attendees, who were under extreme duress of the American enslavement system. It’s important to remember the link that contemporary cultural phenomena like freestyle cyphers facilitated by Soul Food Cypher and other organizations to the ring shouts that recurred in eras past. Doing so reifies the cultural continuity among all African American cultural productions, specifically music. Preceding the Soul Food Cypher is a rich and well-nuanced tradition of oral improvisation, interpolation, wordplay and call-and-response.

Soul Food Cypher exists in a continuum of African and African American culture makers. Its founders and members contribute to that continuum by using the freestyle cypher to teach, volunteer and perform for the Atlanta community. The way participation in a ring shout uplifted the spirits and minds of enslaved participants, so does Soul Food Cypher through its freestyle performance aesthetics and empowering community work.

Right now rap music and hip-hop aesthetics are being employed by the collective American population to function as a balm for the pain and grief brought on by the numerous killings of unarmed Black folks, the global pandemic and the threat of a looming economic crisis. Soul Food Cypher is the remedy hip-hoppers and rappers can turn to today as a reprieve.

In keeping with physical-distancing restrictions, the organization has transitioned to digital platforms — Facebook, Instagram, Zoom and Patreon. Soul Food Cypher carries from the past aural and oral characteristics of the ring shout and Congo Square. With the transition to digital platforms, Soul Food Cypher is able to sustain a digital ring shout. Now its meetups consist of not just freestyle wordplay and battle. Soul Food Cypher invites guests every Sunday to speak on contemporary issues affecting the hip-hop community amid the pandemic.