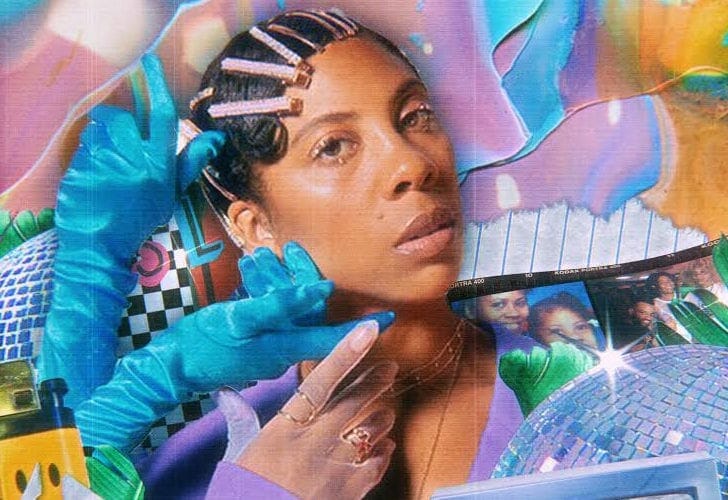 Creative in Residence: An uplifting open letter to BOSCO from Quianah Upton

Editor’s note: Brittany Bosco, often simply known as BOSCO, is a critically acclaimed multidisciplinary artist, singer and designer from Savannah who began to rise to prominence in Atlanta’s music and creative scenes in the 2010s. She founded the creative agency SLUG and its associated record company, Slug Records. Quianah Upton is an Atlanta creative entrepreneur, event producer and social justice advocate and organizer. She is the founder of the future greenhouse eatery Nourish Botanica. (The BOSCO portrait is by visual artist Barbara Rego).

It is summertime. The golden moment of the season when the sun’s rays peak through bird feathers, echoing trails of light, fluttering on the wind. Summer, when I decide to go skating with my roller skates I just got for my birthday. Two years ago, you had us all at Cascade Skating Rink. Me, stiff with knees unbent; you, skating backward, forward, blond curls flying in “pum pum” shorts. You had all of us girls, and even a few guys, recapturing that feeling of childhood. That feeling of eternal summer. This piece is part of our new “Creative in Residence” series. Our guest editor this month — overseeing one story a week — is Floyd Hall, a writer, producer and documentarian.

These are the Polaroid snapshots of our memories. The vintage days of Wet Wet pool parties. You, mothering us, then leaving early to practice. Dance. Rehearse. Organize. Hold meetings. Design. Draw. Create. Build castles.

Since you were 2 years old in Savannah you have been building your own future. In high school everyone knew you were destined for greatness when you shined in all the choir concerts. Things really took off when you joined the dance team and your friends found out you could not only sing but “dance your butt off.” Every time your cousin Constance Brittany would visit, you were teaching her a new dance routine or a song to sing.

Your epic multitasking had you dancing from Savannah to Atlanta into our hearts, holding it down at Sugar Hill at Underground Atlanta and Lenny’s Bar on Memorial Drive, handling your business and biking through New York and L.A. and, as such a young woman, singing to your own drum beat through Europe.

I remember when you were leaving to move to New York; Ashley, Aleshea and I came over to help you pack and redistribute your clothes. As we sipped mushroom tea we went through loads of +FRESH.i.AM+ outfits and shoes galore. I was not at all happy you were leaving, but you pulled out, pulled it off and pulled back up when you could — never forgetting your friends. These are our memories. I’m not the only one who feels this way about you. So many of us do. It’s a fact of Atlanta life that if you meet BOSCO, you’ve met the host of creative Atlanta. Plus, if anyone has sat at her table and had the pleasure of tasting her amazing cooking, you know you’ve been welcomed Southern-style.

BOSCO, somehow you’re able to tie it all together and never forget home. Never forget how to make people feel, whether it’s through your voice in a song or watching you become the mother to Arlo that you’ve always been to us (although you hate when we say that). Understanding now how your mother, father, friends in Savannah molded you, it’s important to know that we see you as a woman who hasn’t lost her way or compromised her values and beliefs.

In 2017 you launched SLUG, a creative agency that allowed you to spread your talents across multimedia platforms. From motion animation to experiential design you developed a team that is setting a high standard for Atlanta creatives. And, as a Black woman, this is so important for our city.

After releasing several musical and creative projects that honed your vision, watching you bloom in L.A. was a pinnacle for me. I felt like you finally got to be the artist you were born to be, as individual and multifaceted as a grain of sand. In L.A. you attended the Grammys, partnered to create content with Instagram and Foot Locker, all the while continuing to smash it musically by having several songs appear on the soundtrack to HBO’s hit show Insecure. Then, earlier this year, you announced the culmination of these efforts: SLUG Records, your own content-led record label. Piece by piece, you’ve created an entire vehicle for yourself and other artists.

It was so important to you and to artists in Atlanta to see you develop yourself in so many areas, never letting a ball drop or one note outlast the beat and ring off key. I’m sure you felt so much pressure over the years but you used it like a tool. To push yourself and others. I’ve seen you be super tough on yourself and your team, and although you’ve mellowed quite a bit, it’s like watching the same sun with a different pair of sunglasses. Still warm. Still cool. All summer.