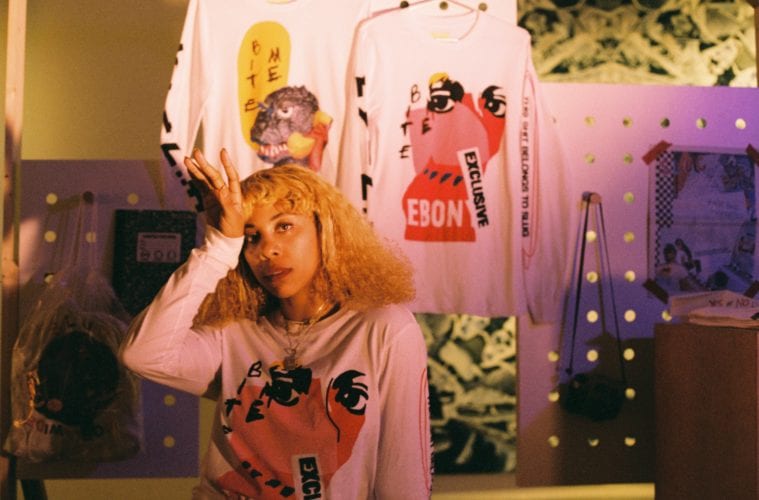 Brittany Bosco’s career is a kaleidoscope of artistic abilities that is reflected through her vibrant sense of fashion, genre-defying music and multimedia art that embraces millennial culture. The Savannah-born singer has been making major noise for more than a decade now, first cutting her teeth in Atlanta’s DIY scene.

When she wasn’t studying fashion design at SCAD, she was writing songs and developing her voice. Her signature blend of R&B, Afrofuturism and psychedelic-soaked rock can be found spread across her many albums, including a mixtape with beloved DJ Speakerfoxxx, who passed away toward the end of last year. Bosco also helms SLUG, a collective creative agency located in Atlanta.

Though Bosco has since moved to Los Angeles to expand her career, she’s returning to SCAD’s Savannah campus for a performance that bends the boundaries of what is considered art at deFINE ART, held February 26–28. She recently sat down with ARTS ATL to chat about her return to SCAD and to reflect on time with Speakerfoxxx, upcoming releases and more.

ARTS ATL: Can you tell me about SCAD’s upcoming deFINE ART? “Talent is just a byproduct of hard work. I want to encourage other artists to keep going and condition your mind to make a conscious decision daily to do the right thing.” —Bosco (Photo by Cameron Kirkland)

Brittany Bosco: I’m going to be performing at the Savannah location — I’m from Savannah, and I attended SCAD there. The event honors SCAD alumni along with other multimedia artists that have influenced culture or the millennial culture. One of my college friends put Emeka Alams and I together. Emeka is a multimedia artist and designer and is going to project a video montage from split screens with my music as the soundtrack. We are going to do alternative versions of my music to fit the landscape of art, culture and things that redefine traditional art.

ARTS ATL: What are you most looking forward to about coming to home to visit since moving to L.A.?

Bosco: I think it’s a sense of coming full-circle, seeing as I am from Savannah, but coming back in a way that not only represents my culture but also represents my family. It’s being an example for other women and other artists who come from a small community and showing that you can make an impact not only in your city but globally. I not only am coming back to share my experiences, but I also get to come back to the school that helped mold and shape me into the multimedia artist I am today.

ARTS ATL: How do your music and multimedia art influence one another?

Bosco: For a while I felt like I’ve always been multimedia, but if you think about it, before the social media age became so relevant in our life and in today’s culture, people didn’t really know what to do with multimedia artists. There was no way to market multimedia artists, and it was a void for a few years until artists like Pharrell and Tyler, the Creator, that are not only musicians and singers but multidisciplinary artists creating a world for their work to live inside of. I’ve been really trying to drive my vision home and be as clear with my artist statement as possible.

ARTS ATL: In 2016 you released Girls in the Yard with Speakerfoxxx. I’m sorry for your loss. Could you reflect on time working with her and your friendship?

Bosco: Her and I were friends long before we ever thought about working on music together. We had a mutual respect and a mutual love for each other’s craft, and back then it didn’t seem like it was embraced or encouraged to support other women. But with Speakerfoxxx, it was always a mutual respect — we would go to each other’s shows, spend the night together and just support each other.

At that time, I wanted to switch up my sound a bit and get more into the urban hip-hop market. She was a well-respected DJ and a legend in Atlanta, so it felt right. In 2015, I ended up moving in with her for 4–5 months, and we worked on Girls in the Yard. It was such a great experience. She pushed me and encouraged me in areas that I hadn’t been able to explore before, and we were able to create some magic. At the same time, I was working on my record b. and she was working on her own stuff, but our mixtape ended up being a huge thing.

There’s power in numbers and power in collaborating. Ego is what stops a lot, and continuing to strip that down and be conscious of it — that’s one thing her and I would check at the door.

She was truly a legend, from her fashion sense to her knowledge and wealth of music. It’s just so disheartening that she couldn’t continue her legacy. She’s one of a kind and will always be respected, loved and missed not only for her music but for the person that she was. SLUG’s zines pop with playful vibrancy, accessing the aesthetic and nostalgia of the ’90s. (Courtesy of SLUG)

ARTS ATL: It’s been two years since you unveiled your collective creative agency, SLUG. How have the last two years been?

Bosco: It started out as a passion project collective-turned-agency, and I want to stress that we are a collective that offers agency services. As a multifaceted artist, I never wanted to work for anyone, and I needed to figure out a way that I could give back to the community while also having a place for my work and the people I respected to shed a light on different creators in the scene. The concept started in 2016 and launched in 2017. The things that we’ve been able to do in such a short amount of time is trippy. I feel like the key to abundance is gratitude, and we have been so active with showing different talents without wanting anything and just giving — we’ve been able to work with Toyota, Snapchat, Instagram and more, all of whom loved our vision.

I would have never thought in such a short amount of time that people would understand the vision, and because it’s so colorful and playful, it pushes the boundaries of what art is seen to be, especially in spaces that could be seen as the stereotypical corporate.

ARTS ATL: Your last album was released in 2017. Do you have anything in the works?

Bosco: We’re going to have some pretty cool new stuff drop at the end of this month and in May. I won’t say much more, but keep on the lookout.

ARTS ATL: Biggest differences in the creative scene between L.A. and ATL?

Bosco: The accessibility L.A. has to talent, in that a lot of artists I admire or want to work with live here. In Atlanta, there are many multimedia artists, but it’s known for the trap and rap scene, which is wonderful. But there are more scenes in Atlanta with many underground artists.

I like Atlanta because it doesn’t have any rules. You can create yourself, and the city is so welcoming — the community really nurtures the art scene. It’s not about a single individual, it’s about everybody, and if you have good energy and good vibes, people want to work together. L.A. has a lot of the artists that you see or want to work with, but Atlanta has the heart.