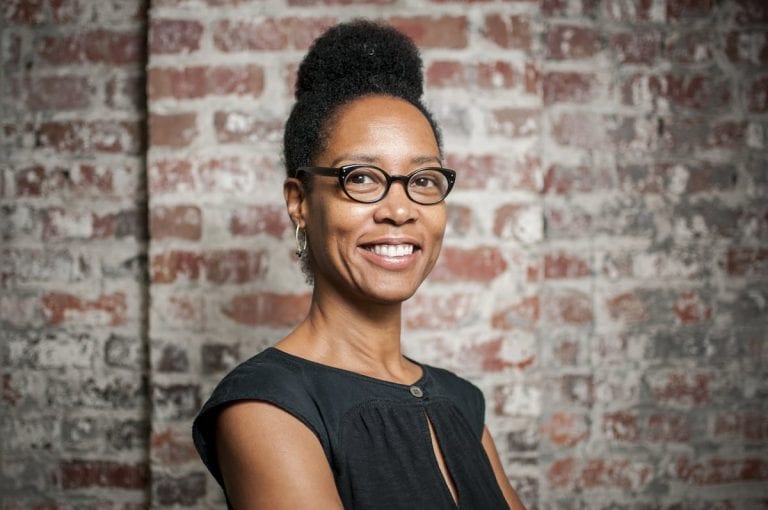 A conversation with Sonya Clark, who tells stories through coiffured canvases

In 2012, Clark, who is the chair of the Craft/Material Studies Department at Virginia Commonwealth University School of the Arts, started reaching out to 12 hairdressers and asked them to craft works of art on her hair and on a canvas. The result of their work is The Hair Craft Project, photos from which will be on display in Georgia State University’s Welch School Gallery, September 29-November 11. Clark will also give a lecture on Thursday, November 10, from 4-5 p.m., and a reception with her will follow the lecture.

Clark had been working with hair styling tools, hair accessories and black hair as thread in her work for several years before the Hair Craft Project, with commentary about standards of beauty and race throughout her work. She has threaded black braids onto the Confederate Flag, formed a tree from rattail combs, used braids to create sculptures and given Abraham Lincoln an afro on the five-dollar bill. The Hair Craft Project, which in its fullness consists of 12 canvases and 12 photos, went on to win  at ArtPrize in 2014. The canvases and some of the photographs were acquired by the Museum of Fine Arts in Boston.

The foundation for her work was laid nearly 40 years ago through afternoons spent with her maternal grandmother who was a tailor. Clark grew up in Washington, D.C., and is the daughter of a Jamaican mother and Trinidadian father. Her grandmother often came from Jamaica to visit the family, and while she was there they would stitch and tell stories. Though her grandmother passed when she was 10 years old, Clark says that those early years formed her connection between work of the hand and storytelling.

Sonya Clark: I’m going to break that rule. My hair is the glory of all my ancestors who have come before me, and is great material for artists to work their magic in.

ArtsATL: What is your earliest memory of getting your hair done?

Clark: It ties back to my grandmother. In D.C., right across the street from us was the home of the ambassador from Dahomey, which is now called the Benin Republic. He had a very large family and my sister and I used to go over there and we had such a good time. Inevitably one of the girls who was a little older than us, but pretty skilled, would do our hair in these amazing hairstyles. We were having our hair cornrowed and thread-wrapped. As a child, I knew that it was art that was happening on my head. Then I would come back to my own home and my grandmother would teach me how to sew, so those things became very much linked.

ArtsATL: How did you first get into textile arts?

Clark: When I graduated from Amherst College [with a degree in psychology], my parents’ graduation gift to me was a trip to the Ivory Coast. I studied textiles and textile production there, and I was hooked. I knew I had to go to art school. It was a little later in life that I actually tried art as a vocation, but as soon as I got in my first class at the Art Institute of Chicago, I knew that it was the right thing. I promised my parents with that second bachelor’s degree I would make a decision on whether I was going to pursue a doctorate in psychology or pursue art, but I knew from day one that it was art.

ArtsATL: What made you want to do this exhibition?

Clark: Many years ago, a friend of mine, Bill Gaskins, had written a review of an early work of mine and he said “hairdressing is a primordial textile art form.” That brought back the memory of having my hair done at the ambassador’s home and having my grandmother story tell with me. For a long time, I’d been working with hair as medium in my work, but I wanted to test what he had written. The other thing I wanted to do is bring the predominantly European American art community and the African-American community in Richmond together.

ArtsATL: How did you go about choosing the hairstylists?

Clark: I usually do my own hair, so I went to the closest hair salon to my home in Richmond. I went in there and I asked, “Who in here can do natural hair?” And the first stylist who signed on with me was from there and she did my hair. It was word-of-mouth for the other salons — I asked my friends who they would recommend. Each of the hairdressers taught me something new. It’s a very personal thing having your hair done, so we got to know each other. The hairdressers are artists in their own right.

ArtsATL: Did you give them direction?

Clark: I was looking to see whether their skills as hairstylists were transferable to being textile artists. I didn’t want them replicate what they did on my head. I wanted them to treat the canvas like another client. Some of the stylists got really exploratory and did things that they would not normally do. There were rules in terms of doing my hair — they couldn’t permanently color, cut or straighten my hair. With the canvases, they had free reign. The canvases are really amazing.

There’s much to say about African-American women’s hair. We are a diasporic people and hairstyles are a diasporic art form. While it is true that I had different stylists do my hair and we took a picture of it, I also walked around with each of those hairstyles for anywhere from two days to six weeks, depending on the style. I travel a lot, so that means their artwork was traveling with me wherever I went in the world. It was a pleasure to be walking with art on my head, just as I did when I was a little girl, carrying their art throughout the world.