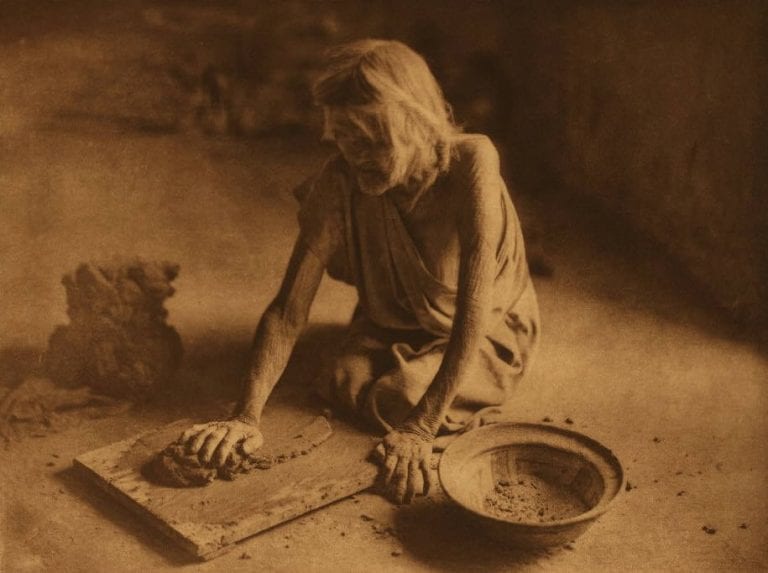 Edward S. Curtis photographed many now-iconic images of Native Americans, including The Potter.

By most measures, Seattle photographer Edward Sheriff Curtis was a failure. His photography business floundered, then went under. His wife divorced him, leading to his later arrest for failure to pay seven years of alimony. He died penniless and largely unrecognized in 1952 at the age of 84, having devoted the prime of his life on a quixotic quest of photographically documenting the ancient traditions of the Native American, a project that few other than Curtis seemed to care for.

Curtis embarked on his photographic odyssey at a critical crossroads in the history of Native American culture. People who were born into the traditional world of Native Americans were still alive, yet a new generation that had never known any life beyond the reservation had reached adulthood. Their old way of life was fading away; a new, and often brutal way of life was forced upon them. Curtis recognized the historical relevance of the moment and knew that it was critical for someone to record those traditions before they vanished.

Curtis became so trusted within the American Indian communities that he was allowed to participate in sweat lodge ceremonies and to photograph one of the most sacred of rituals: the Sun Dance. He also photographed and filmed daily Native American life, from exotic whale hunts to basket-making to the simple act of fetching water.

He took photographs of more than 80 tribes over a 30-year period, a project partially funded by J.P. Morgan. The work resulted in a 20-volume opus called The North American Indian that included 2,500 photographs. Only a little over 300 sets of the pricey volumes were published, sold primarily to museums and libraries with large endowments. Desperate for cash, Curtis eventually sold the rights to his photographs to Morgan’s son, who then sold them to a company in Boston.

His life’s work, including prints and the original glass-plate negatives, were boxed up in a basement, where they remained for the next half-century as his photographs faded into obscurity. When Curtis died, his obituary in The New York Times mentioned his photography once, in passing.

In 1971, the work of Curtis enjoyed a major revival after a fan uncovered and purchased the long-forgotten basement stash. Major exhibits were staged at the Morgan Library & Museum in 1971, the Philadelphia Museum of Art in 1972 and the Recontres d’Arles festival in France in 1973.

The newly-discovered photography of Curtis helped change our society’s perceptions of Native Americans. For much of the 20th century, Native Americans were viewed with indifference or contempt. The view promoted by Thomas Jefferson — that they were little more than needy and helpless children — was still pervasive, as was the Hollywood stereotype of an Indian who grunts, says “how” and then gets killed by the cavalry.

The sepia-toned, black and white portraits of such legendary figures as Geronimo of the Chiricahua Apache tribe, Chief Joseph of the Nez Perce and Red Cloud of the Oglala Lakota brought Truth into the picture. His portraits were superbly composed and captured both the humanity and dignity of his subjects, as well as their trauma, weariness, and strength.

As someone who has recently learned of my Native American heritage, I was eager to see the magnificent work of Edward S. Curtis in By Her Hand, a traveling exhibit at the Booth Western Art Museum in Cartersville through November 20.

The Booth Museum, founded in 2003 through anonymous local donors who were fans of the American West, is the second largest museum in Georgia (behind Atlanta’s High Museum). Though it is a geographical misfit (a cowboy museum in Cartersville?), it is a thoughtfully conceived facility with an abundance of interesting, mostly modern, work that depicts both sides of the Old West — the cowboys, crooks and heroes who pushed westward, and the Native Americans they killed and displaced.

It is worth the drive just to see some of the most definitive Curtis photographs blown up in crystal-clear, oversized images. The exhibit focuses on his photographs of women and includes examples of pottery and baskets that offer a limited view of their daily lives. But I was disappointed by the tone of the Curtis exhibit, which doesn’t live up to the quality of the rest of the museum.

From what I’ve read about Curtis, he would have been aghast at the whitewashed, revisionist history in the visitor’s brochure for the traveling exhibit. It correctly notes that Curtis was motivated by the desire to document traditional Native American culture before it was lost. But it then blithely goes on to reassure that: “He discovered and presented a vibrant and flourishing Native American people steeped in tradition and ancestral values, proving his early assumptions incorrect that Native people were dying out and disappearing.”

That statement is preposterous to the point of being offensive. It’s like saying: Slavery turned out to be a good thing for Black people, right?

If the brochure’s assertion were accurate, then there would have been no reason for Curtis’ 30-year mission — his photographs wouldn’t have been necessary. Curtis himself wrote in his introduction to the first volume of The North American Indian in 1907: “The passing of every old man or woman means the passing of some tradition, some knowledge of sacred rites possessed by no other; consequently the information that is to be gathered, for the benefit of future generations, respecting the mode of life of one of the great races of mankind, must be collected at once or the opportunity will be lost for all time.”

Rather than celebrate the intent of Curtis, the exhibit reduces his work to nothing more than pretty pictures of people from a time long past.

There are few explanatory notecards that accompany the photographs. The Potter, for example, is an image of an ancient Native woman molding clay on a flat board. In his notes, Curtis identified the woman as Nampeyo, considered the best potter in the Indian town of Hano. He went on to describe how the potter’s clay is dug out from under the rocks on the foothills of the mesa and goes on to discuss how they made pottery.

That is useful and interesting to know in absorbing the impact of the image. Yet, had I not brought a book about Curtis with me, I would have never had that context.

A Mono Home is one of the keynote photographs in the show. It depicts a winter shelter of the Mono tribe taken at Owens Lake next to the Sierra Nevada in California with bunches of “burden baskets” gathered outside. Curtis noted the hemispherical building was about 14 feet wide, made from willow branches and grass thatch. He beautifully framed the photo in fog and shadow so that the building seems to be part of the mountainous landscape behind it.

None of that detail is shared at the exhibit. Instead, a nearby note card describes the photograph this way: “The viewer is presented with questions . . . Could I live there, would my family be safe there, could I survive what I perceive to be a harsh environment?”

As a viewer, it seems invasive to be told how to react to a photograph or piece of art. Part of the experience is to discover that for myself. Greater historical context would be helpful, a supplement to inform my impressions and hone my perception of the works.

That said, it is initially thrilling to see so many Curtis photographs hanging on a museum wall. In particular, there are oversized versions of two Curtis classics: Qahatika Girl from 1907 and Mosa from 1903. Both are close-up portraits of stoic and sorrowful young girls born into reservation life. Both are among the most gorgeous and grand photographs in the Curtis archive.

But the exhibit gives them no human dimension. Who were the girls? Where were they from? What were the circumstances of the photographs?

It’s not like that information is not available. In Qahatika Girl, Curtis noted that the subject of the photo was born in the desert about 40 miles south of the Pima reservation in Arizona and was a member of the Qahatika tribe. “One traversing this region would have cause to wonder how a human being could wrest from so barren a land the necessities of life,” Curtis wrote. “It is only the life of meager requirement that could exist here.”

Mosa is even mistitled; the correct title is Mosa — Mohave, but the exhibit annoyingly often drops the tribal names in the titles that Curtis included in a majority of his photographs. The young girl in the portrait has paint streaked on her face and a look of quiet defiance that summons the image of an ancient Lisbeth Salander. Curtis said the girl was a member of the Mohave tribe and was still thoroughly aboriginal at the time of the photograph, with little contact with modern civilization.

For an exhibit that intended to focus on women in Native culture, the opportunity to offer insight into the unique, and often progressive, roles of women in traditional Native American life is missed. Instead, we get samples of their pottery, baskets and (no stereotyping here) a few Navajo rugs hanging on the wall, along with some pleasant words on a note card.

On December 29, 1890, an estimated 300 largely unarmed Oglala Sioux men, women and children were massacred by 500 soldiers of the Seventh Cavalry for the crime of frightening White officials by performing the tribal “Ghost Dance” and praying for a return of the old ways. The U.S. government then celebrated the atrocity by awarding 20 Medals of Honor. Black Elk, the Lakota holy man, marked Wounded Knee as a sorrowful turning point. “A people’s dream died there,” he said. “It was a beautiful dream . . . the nation’s hoop is broken and scattered. There is no center any longer, and the sacred tree is dead.”

Edward S. Curtis was adopted as a son by Black Elk, and he understood the meaning behind Black Elk’s powerful words. Even today, the photographs of Curtis still invite us to embrace the humanity of Native Americans, their sense of loss and their strong spiritual center. He grasped something that the curators of By Her Hand don’t appear to get. For Curtis, there was no shame in acknowledging the mistakes of the past; he knew the danger comes in denying their existence.