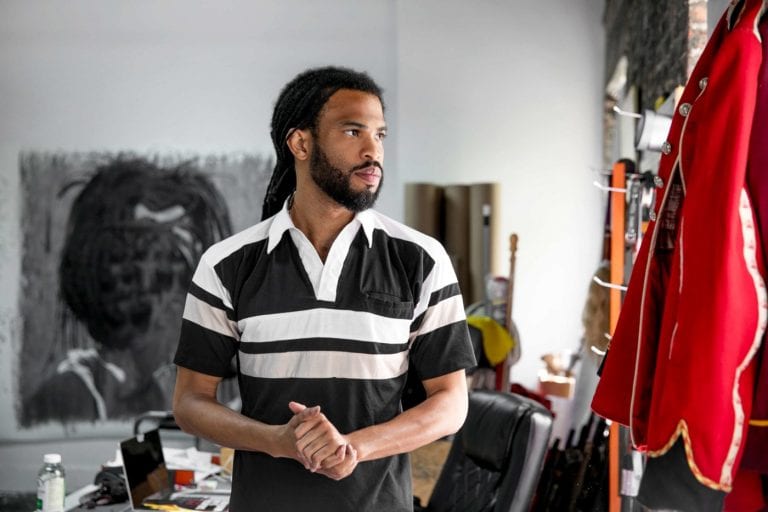 Cosmo Whyte’s work weaves personal history, secret ritual and the inflicted emotional and physical trauma from colonization into textured works that inform a sense of identity. Growing up in Jamaica and now living in the United States, Whyte’s art traverses through the inquiry of “how notions of identity are disrupted by migration — particularly migration as an unfinished arc of motion whose final resting point remains an open-ended question,” as he writes in his artist statement. Each of his works can be viewed as a ritualistic or emotional map, a guide into his inquiries of how historic abuses continue to generate forced identities.

Whyte moves through a range of artistic mediums — painting, built objects, photography and performance — as his ideas emerge and develop. For Whyte, art making starts with an idea. The idea comes to being through decisive exploration of a material. His materials range from paper, gold leaf, charcoal, to photography and the performance of a silent ritual, to bike wheels, speakers and sound. This exploratory process leads him to thoughtfully describe his practice as transdisciplinary, where the engagement with a specific material becomes the focus of a piece. As Whyte says regarding his process, “I understand that within each medium there is inherent strengths and weakness.” The tension between polarities not only is a guide for his creation but also a theme he confronts and presents in his works. 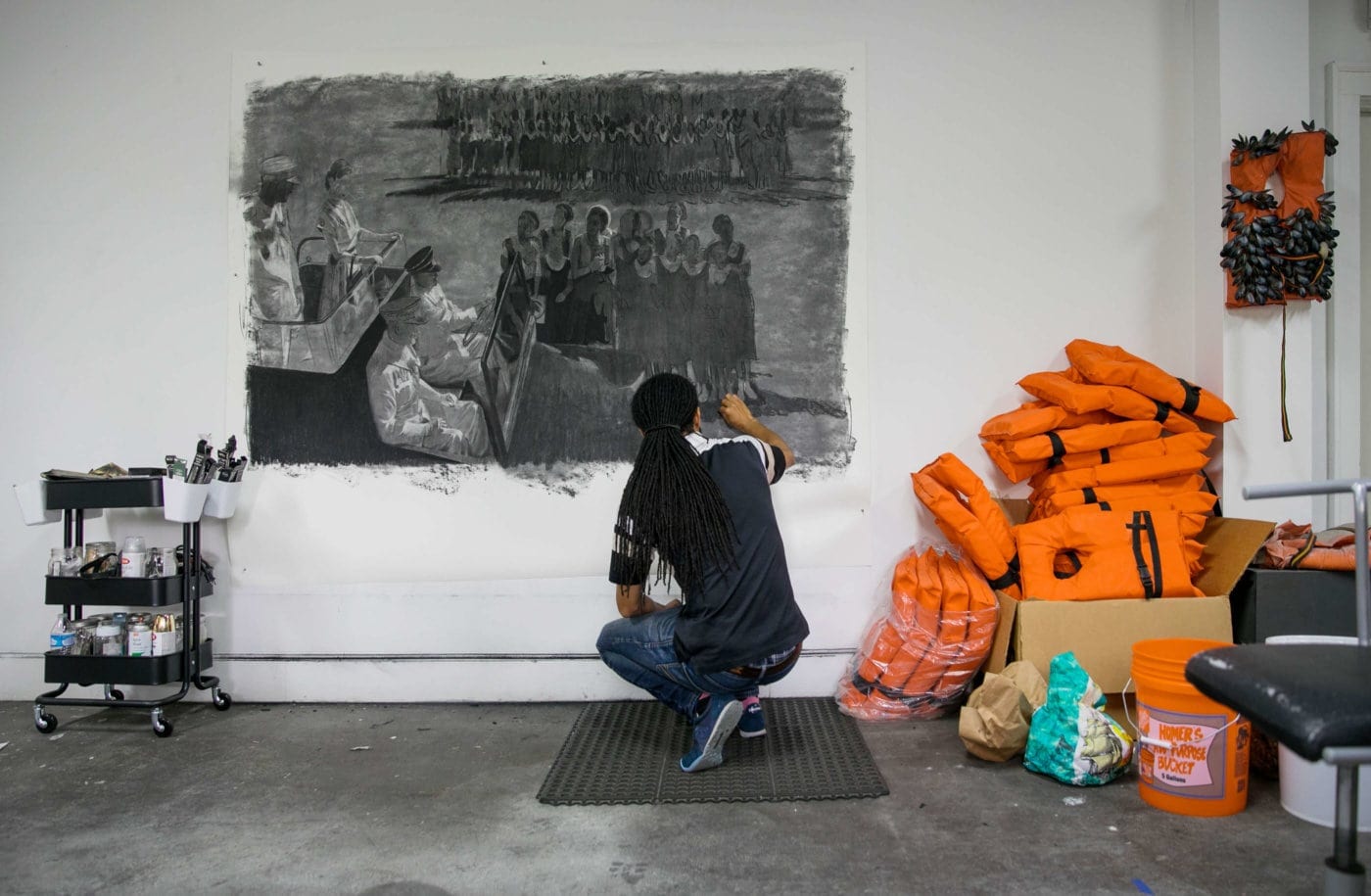 Whyte’s charcoal drawings are wispy and ethereal; they seem to capture movement and the dimensionality of time. His figures emerge from a blank cloud of distortion and are labeled with challenging words from the Patois language, words that are a residue of hierarchy and harm. In his diptych Ginal, a figure crouches against an ornately decorated wall in the left panel. He hovers, and Whyte captures the shift and movement of the form, so it appears the figure is repeated, having multiple legs and arms. In the right panel, it appears as if the figure is fighting himself in a twisted, struggling ball. In Whyte’s drawings, there is a looseness felt from his use of charcoal, but his style is captivatingly beautiful. His work is disarming – it’s easy to get entranced within it before realizing the difficulty of the content it depicts. Whyte also wears the paper of his drawings as a way to employ a type of visceral language that translates emotion and tension with the wearing of the edge or scarring of the paper fibers. The language Whyte builds from the destruction of the material is another ritual, one that examines the complication of representation.

Through the lens, Whyte documents his created ritual of becoming or emerging as a forced or conceived identity. His photographs allow the viewer to be “a voyeur into these rituals that I never fully revealed; the rituals are grounded in what I view as an illogical worldview created from colonialism,” as he says. In the photograph Nkisi, a figure stands on a rock at the edge of a body of water, dressed in a business suit. The figure is adorned, nearly suffocated, with many dress ties. The ties are tied up to the top of the figure’s head, covering his eyes, entire face, and chest. Nkisi are objects inhabited by spirits in Central African regions, and for Whyte’s work, the question of which spirit and which object is embodied rises. In a subsequent photography in the same series, High Tide, the same figure, again covered in ties, floats in the water, hands jutting from the surface. These photographs reveal what it feels like to the artist to begin to confront and unravel systematic actions of power.

For his sculpture piece, For a Well Traveled African, Whyte created a speaker system on bicycle wheels similar to the pushcarts from his home country. This piece has the feeling it, too, has traveled with a palpable sense of the heaviness of moving the pushcart from place to place. 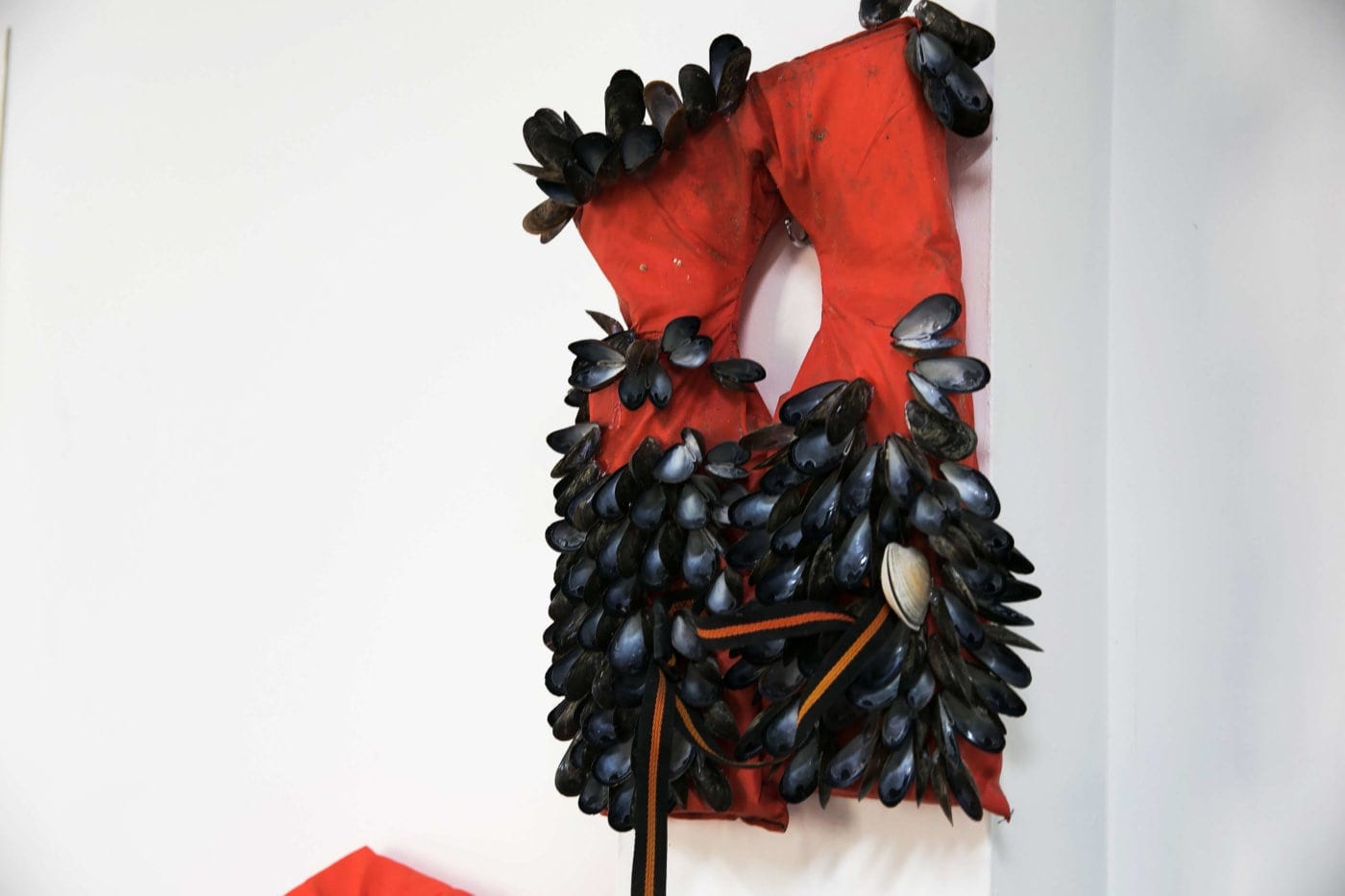 For his work in the ATLBNL at The Atlanta Contemporary in 2016, the pushcart was positioned against a photographer’s backdrop of an idyllic beach. Exuding from the speakers was a sound piece made from the artist isolating the sound of humming taken from the television show The Jefferson and ends with the line, “we finally got a piece of the pie.” In another object from the same series, Something in the Water, Whyte adorns a life preserver vest with mussel shells. The faded orange of the vest coupled with the dusty blue of the shells is reminiscent of adorned clothing and jewelry, but there is something darker lurking. The life vest becomes nearly useless with the added weight of the mussel shells, speaking to the cyclical acts within systems of oppression. Embodying Whyte’s objects is a seamless assumption of performance. It’s as if the artist actually used these pieces in the world to report of their uselessness against floods as in Something in the Water, or to confront sounds traversing the country as in For a Well Traveled African; Whyte’s awareness of this particular failure to save and the weight of the loss of identity are so strong.

Having shown in Atlanta, Cape Town, South Africa, Miami, Paris and Kingston, among other places in 2016 alone, Whyte is still creating along his core themes of identity, the effects passed down through generations after colonization and the language of ritual. Whyte is currently working with a Jamaican organization to create a socially engaged pushcart project.

As a finalist for the Hudgens Center for the Arts’ 2017 Hudgens Prize, Whyte is taking the exhibition and possibility of the award as, “a continuation of themes I’ve been thinking about and more iterations and more clarity.”